You may not have heard the news but Nintendo has released a successor to the DS and it’s a real beauty. Glasses free 3D, graphical prowess, built in camera(s), an analogue joystick thing, and the list goes on and on. As with any system launch there’s got to be some launch titles around and the 3DS had one of the largest with roughly 17 titles to choose from. Sega was there on launch day with a new entry in their successful Super Monkey Ball franchise.

Is Super Monkey Ball 3D a worthy entry into the popular series or is this just another new system cash-in until Sega has time to develop something more substantial? Hit the jump to find out. 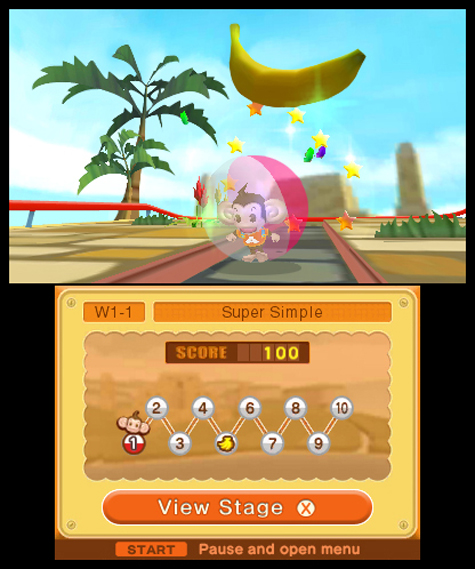 For anyone who has played a Super Monkey Ball game in the past, you already know what to expect from the main game. In an update to the Marble Madness style of game you guide a monkey in a ball that is super (get it?) through treacherous courses collecting bananas and trying to make it through a gate at the end of the level. The only chance of failure is either falling off the edge of a track or running out of time. It’s a simple yet addictive design and proved extremely popular when the original games appeared on the Gamecube and other last gen systems.

Unfortunately, Sega has really pimped this series out and you can find a Super Monkey Ball game on every platform known to man and few live up to the original game’s variety and appeal. If you’re not completely sick of the series, however, you could do much worse than Super Monkey Ball 3D. The game looks great on the 3DS and the use of 3D works incredibly well. I actually found the game easier to play with the 3D on than with the slider completely off as it seemed easier to judge distances and navigate the levels. My only complaint is the lack of difficulty and small amount of levels. You can easily sit down and beat the main game in about an hour. If you’re big on topping your high score and collecting all the bananas than there’s enough to keep you busy but you’ll be seeing the same things over and over. 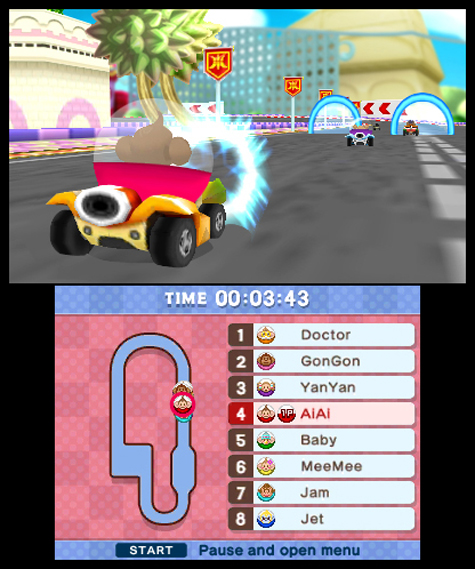 In addition to the main “Monkey Ball” style game, Sega has also thrown in a kart racer and Smash Bros. style fighting game. The kart racer is best avoided. It’s unfortunate because the racing minigames on the Gamecube provided a nice distraction from the main game but here you get a lackluster Mario Kart clone. Only 9 tracks with 3 variations in design exist and once playing you’ll find a mess of frustrating powerups and controls. I found the AI to be extremely cheap and rarely finished anywhere besides close to last in most of my time playing. I also could not play this mode in 3D for some reason and had to go to the old school 2D mode to even stand a chance.

The fighting game, however, is a fun Smash Bros. ripoff. It does nothing you haven’t seen before but unlike the kart racing you will find some enjoyment from the game. Basically, you select a character and then are transported to a multitiered 2D level as proceed to beat other monkeys and make bananas come out of them. Whichever monkey has the most bananas at the end of the round wins. Pretty simple but like Super Smash Bros. it’s the mindless simple gameplay that makes it enjoyable. It’s more of a button masher than anything but after you get sick of the short main campaign it’s a nice diversion. It lacks Smash Bros. draw of pitting fan favorite characters from different games against each other but until we get a portable Smash Bros. this will have to do. It’s too bad Sega didn’t throw in a few non-Monkey Ball characters into the mix. 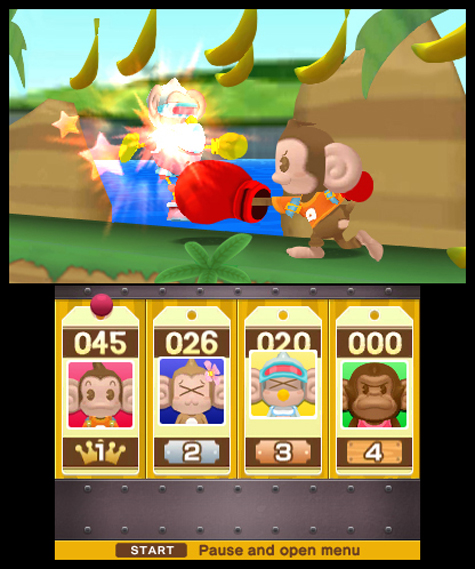 In the end, you could do much worse than Super Monkey Ball 3D as your launch game of choice. While 1 of the 3 games included here is completely forgettable and the overall game is quite short there’s a nice variety of stuff to keep you busy until something better comes along. The game probably won’t stand the test of time as many better and more substantial games start to come out but for now it stands near the top of the 3DS’s game library. Unfortunately, that’s not saying much.

Super Monkey Ball 3D rolls its way to a C+.