In 1995, Rayman hit the Sega Saturn and PlayStation amidst many 2D side-scrolling adventure games and may have fallen under the radar to some people. Rayman was a quality title with creative level design, unique personality, and a collect-a-thon that had gamers running back through levels many times. Do all of these qualities hold up or fall short in the 16-year celebration that is Rayman Origins? Hit the break to find out, my little Teensies. 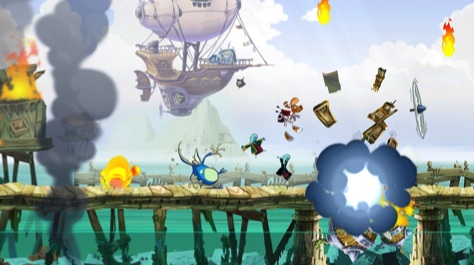 The plot of Rayman Origins is simple enough: Rayman and his buddies are chilaxin’ in the Glade of Dreams when their snoring and eating habits annoy the granny of the underworld.  The old bat decides to capture your friends, the Electoons and the Nymphs, and in the process also let loose her army of minions unto the world.  Each world is also inspired by the literal dreams of the Bubble Dreamer, which explains the elaborate and ridiculous boss battles. Rayman, Glowbox, and a few Teensies must stand up to the granny and rescue everyone.

Rayman Origins is a 2D platformer with gorgeous levels and atmosphere. If you are familiar with the first Rayman, you will immediately recognize the flourishing jungle and forest levels that introduce you to the world of Origins. Flowers, vines, trees, and lakes are vibrantly strewn throughout the TV screen in a form that could be confused for a painting. Every level appears as if it is taken straight from a sketchbook, which is refreshing amongst every other current-generation game attempting to be the next window into a “modernized” warzone with 30 shades of brown. 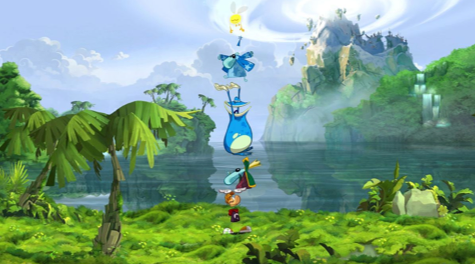 The level design in Rayman Origins can be simplistic and yet elaborate at the same time with platforming, swimming, and flying all being a regular part of any act. As players progress, they will unlock “moves” and “abilities” such as flying, wall-jump, ground-smash, and wall-ride. These abilities greatly increase a player’s arsenal for exploration. With the game being up to four players at once, it pays to have friends aid in the search for the Electoons within each level. Medallions are unlocked for every Electoons cage discovered, as well as collecting certain amounts of “Lums” within each level, which serve as a score-counter for the most part. To reiterate, the game is a collect-a-thon, but with vibrant style.

Origins splits up the gameplay with a shoot-em-up style level near the end of each world. These “schmup” levels again hearken back to the original Rayman when he befriended Moskito as a flying steed, and proceeded through levels by spitting at enemies or by sucking up enemies to use as projectiles. 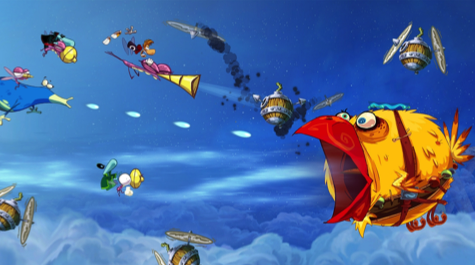 There are levels prior the Moskito rides in which the player must run after a Nymph who is trapped in a runaway cage, which is actually an enemy’s jagged mouth. These racing levels can become frustrating rather quickly, which leads me to a major complaint of Rayman: the sudden steep incline in difficulty.

As with most platformers, Origins requires a bit of memorization, but it is crucial to memorize the racing levels in hopes of finishing them with little aggravation. I did run into moments when I found myself missing ledges by mere inches, touching the slightest spiked edge, or running into an enemy at the exact second he performed an attack only to cause me to repeat a level multiple times while threatening the well-being of my TV; and don’t even get me started on the final boss, which may have taken one hour in itself to complete after an unpleasant amount of continues. 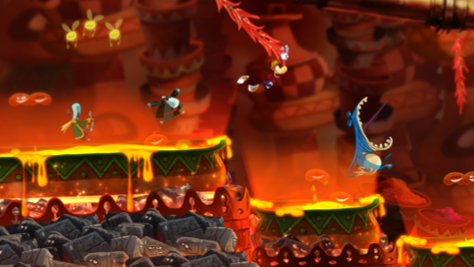 The worlds of Origins vary from forest and music-themed, to snow, fire, water, and sky-themed. Each level has its own personality, which is greatly complimented by the game’s soundtrack. By far my favorite song would be the first one that plays in the water level, Sea of Serendipity, where it sounds as if the fish you are swimming with are actually singing to you in their own lounge-music style. Origin’s soundtrack adds so much character to each level that I found myself humming along more often than not.

Along with the music in the game, the sound effects also compliment every simple action from jumping, “powering up” a punch, or even the aggravated moan of an enemy. The characters in the game who actually speak do so in “Pig Latin,” to a point that it is entertaining to repeatedly click on a character just to hear them say different statements in this language. Often times I notice the subtle touches in games, and Origins is chock-full of them, right down to the harmonies you hear by scrolling through your save files, as well as the ability to run around rampant during the game’s load screens. 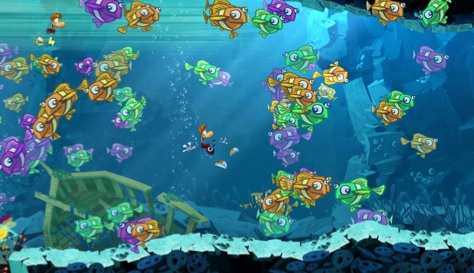 Darling it's better, down where it's wetter

Rayman Origins is the 2D platformer that this generation needed. Mario can take a seat and start taking notes from UbiSoft, while even Sonic could learn a thing or two from Origin’s level design. The multiplayer aspect of Origins will supply hours of late-night hilarity and enjoyment until its hopeful sequel emerges.

Rayman Origins is a breath of fresh air within the fog of serious and “epic” video games of today. It never takes itself seriously and flourishes for this fact alone. Not since Portal has a game been so unintentionally entertaining. If not for the harsh difficulty spike, this game would earn an A+. With this in mind, however, Rayman Origins is a game no platforming fan should pass up, even if he or she has never heard of the Rayman series before.

The Sega Addicts Top 10 Hidden Gems for the Saturn