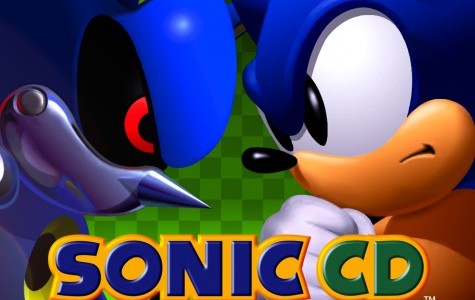 It goes without saying that 2D Sonics are still considered to be the gold standard for the series. Everyone still talks about how we can get back to the “good ol’ days” of Sonic 2, 3 and Knuckles. But one 2D Sonic game has been sitting in the wings for ages now, only discussed in excited whispers by Sega fanatics. Sonic CD.

While readers of our site have likely played the title several times over, Sonic CD has remained for many of the general population of gamers an untouchable entry in the series–a forgotten chapter in the franchise that remains beloved to some, unplayed by many.
Well, Sega has finally rereleased this storied chapter in Sonic’s 2D life, and many players are getting the chance to try it out for the very first time. How does it compare to the handful of timeless classics that first put Sonic on the map? Can the stalwart fans of this underplayed game stand up and proclaim in unison, “TOLD YA SO”? 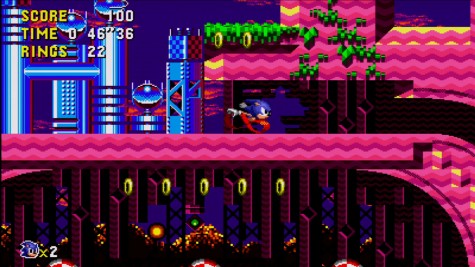 Often enough reviewing ports of retro releases is an easy deal. Unless the conversion is terrible then all you really need to do is review the original game verbatim. However in the case of the recent port of Sonic CD for XBLA I feel the need to review it as a new fresh take on this game, as this port deserves to be played in it’s own right.

If you’ve played Sonic CD before you’ll be familiar with the kooky visual aesthetic and weird time travel based gameplay that was introduced and dropped in this very game. If this is your first time with this installment in the classic franchise then it can be very jarring at first to see just what they changed for this version of the series. However the game does do a good job of easing you into the experience and you do get used to the wacky new elements pretty quickly.

However that’s not to say that these new elements are essentially good. My main problem with the game is that mechanics are often introduced very quickly and then immediately dropped. My main example of this is from one of the final stages in which you are hit by a shrink ray, yet return to normal size a minute later with no mention of that event ever again. 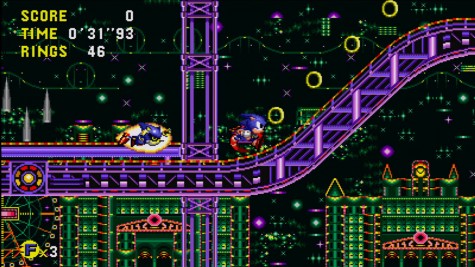 The boss battles can also be lacklustre and even frustratingly short. For a game that isn’t afraid to try new things it often doesn’t want to commit to the ideas it raises.  The Robotnik battles are a prime example of this as he can only take a few hits to kill. Some of these bosses often have a lot of potential too, like a pinball inspired moment which can take just a couple of shots to kill the boss. And if the bosses aren’t being annoyingly short then they are quite tiresome. Unfortunately the game doesn’t really hit the right balance that most classic Sonic bosses used to have.

However while it may seem like the game is quite unenjoyable, that really is not the case. Sonic CD actually has some outstanding moments, such as the brilliant Metal Sonic chase and some really clever time travel gameplay. And whilst it may not be a perfect game, it is definitely a game that every Sonic fan needs to check out. In fact this game is even better than the original Sonic CD due to the extra elements displayed in this port.

From a completely new character, to a smoother display of the animated cut scenes, this is definitely one of the best ports I have ever played. And at the shockingly low price of 400 microsoft points, you would be a fool not to at least try it.

For being one of the best ports I have seen in a long time, Sonic CD gets an A-. 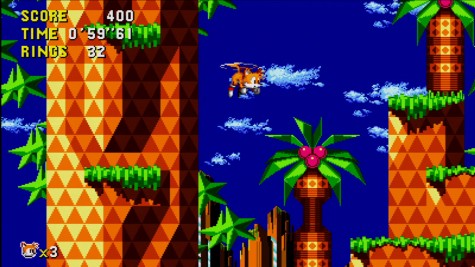 I’m just going to be honest: Sonic CD has never been my favorite Sonic game. While I hadn’t had much experience with the game before reviewing this, those experiences were usually very frustrating and left me crawling back to Sonic 3 and Knuckles. So going into this new port of Sonic CD, I was honestly expecting the worst. I envisioned evenings filled with me swearing at the TV out of frustration, throwing my controller at the wall, and wishing I’d never taken this review.

But that’s not what happened at all.

This is actually a very very well made port. It’s not just a quick cash-in much like the millions upon millions of Sonic 2 ports Sega has released over the years. They’ve actually put a lot of love into this release and took the time to give fans of the game the ultimate Sonic CD experience.

The visuals look incredibly crisp in HD, although I still have a problem with the acid-trippy overly 90s color schemes of the levels, ESPECIALLY Special Stage #6, which probably wrecked my eyesight beyond all repair. I’m loving the retro look for the menus, though. It makes the experience feel more authentic in a way. 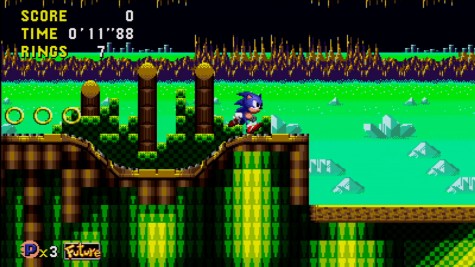 As far as how it plays, I’m not sure if this is just me being older and better at Sonic now, or if it’s something to do with playing on the PS3, or what it is, but I actually really enjoyed the game. A far cry from all the hate I had for it on the Gamecube and PC. I didn’t even hate Wacky Workbench all that much. It’s not a COMPLETELY perfect port, as there’s some slight input delay at times, but overall it’s a solid effort.

Add in extras like time attack, both versions of the soundtrack, an interactive sound test, and Tails as a playable character, and you’ve got more than enough to justify picking this up.

Is Sonic CD still my least favorite of the original Sonics? I’d have to say so, but I’ve gained a huge new appreciation for it thanks to this port and I like it far more than I used to.

If you’re a fan, it’s definitely worth checking out. Just make sure you’ve got some sunglasses to counter all that brightness. B+ 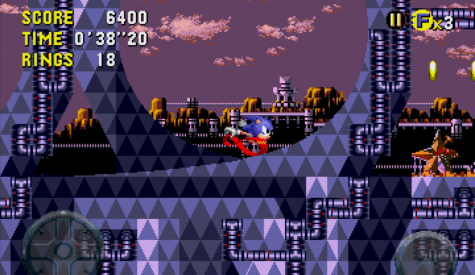 I’ve spent quite a bit of time mulling over my opinion of Sonic CD. It’s not an easy one to criticize, as the risky design choices that make it so refreshingly bizarre also manage to undermine a lot of what makes the Sonic formula work. While I do challenge just how much love Sonic CD has garnered, I don’t mean to argue that the game is inherently bad. On the contrary, the very best choices of Sonic CD are birthed from Sega’s apparent willingness to toy with level, visual, and audio design to create something that Sonic fans had never experienced before.

The most obvious differences come with the level design. Instead of the usually lengthy and flowing stages of games like Sonic 2 and Sonic & Knuckles, many of Sonic CD’s areas are extremely short in length, trading out a lot of the speed-conducive loop-de-loops and splitting paths for taller, more open stages that challenge the player to do a lot more scaling and platforming and a hell of a lot less running. Level hazards feel tailor-made to send you backwards or to prevent an increase in Sonic’s trademark momentum, making for some really confusing and contradictory moments in a series normally focused on speed. Since Sonic still controls the same way, this odd feeling doesn’t detract all that much from the game’s better stages, especially in the visually pleasing opener Palmtree Panic or my personal favorite, Stardust Speedway. Still, certain zones like Wacky Workbench and Quartz Quadrant are deeply wounded by their overwhelming pitfalls and zany design decisions. I appreciate Sega’s willingness to think outside of the box, but some of these loopy elements are so prevalent that it almost feels like some quality has been forfeited in exchange for creating something new with each stage. 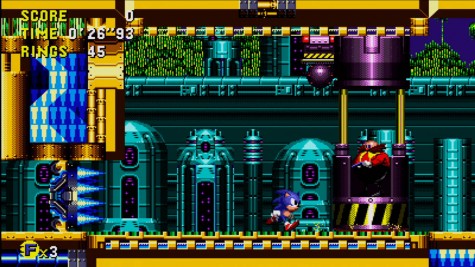 The bosses of Sonic CD feel similarly strange, as they trade out the traditional attack patterns and multiple hit formula of previous Sonic bosses for weak, one-hit bosses that you can only reach once you’ve survived some odd challenge like dodging bombs on a treadmill or inhaling all the air bubbles surrounding your foe’s floating ship. Once again, the originality of these is refreshing, but their awkward design often puts less focus on actually defeating the boss and more focus on just passing the kidney stone of irritating obstacles.

I could go on and on about my conflicting views of Sonic CD (I haven’t even touched on the unnecessary and arbitrarily executed Past/Future mechanic), but I need to address how pleasantly surprised I am at the quality of this iPhone port. I always have and always will lament the inclusion of virtual controls, but this is easily Sega’s best attempt at them yet. Instead of forcing players to keep their fingers on a directional pad that they can’t even feel, Sonic CD adjusts the pad to respond to the player’s touch in the general vicinity of the virtual controls. Now, when your finger slides off the directional pad mid-game, the controls will still respond based on where your thumb is placed relative to the pad. This does wonders for controlling Sonic, and makes for an infinitely more playable experience than the iOS Sonic 2. 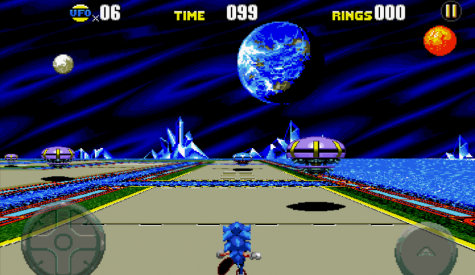 Also of note is just how gorgeous Sonic CD’s unique visual style is on the tiny iPhone screen. One of my favorite things about this game is just how nebulous its level themes are, and the resulting visual insanity in the game’s many gorgeous stages. When playing on the iPhone’s little screen, all of that detail and color really pops, and makes it even more attractive to me than it was on my big screen television.

In the end, I can’t say that it’s not worth picking up Sonic CD. It is an experience like no other Sonic game, and any diehard fan of the series is bound to love its unorthodox charms. Beyond Sonic and Sega fans, however, I have a much harder time recommending it. The level design may be vastly different than any 2D Sonic we’ve ever seen, but it’s also frequently frustrating, occasionally disjointed and sporatic, and I wouldn’t blame anyone for giving up on it after a few of its weirder stages.

As a Sonic game, Sonic CD is equal parts refreshingly new and annoyingly bizarre. As an iOS port, it’s one of Sega’s best, and with its current $1.99 price tag, there’s simply no reason not to pick it up. B.