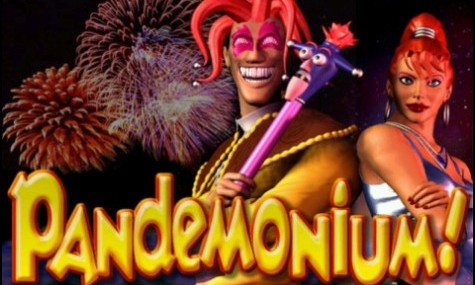 The first experience I had with Pandemonium was with the short demo included on one of the many demo discs I’ve got from the official PlayStation magazine in Germany. I remember playing it several times, even though it was only one level and thinking it was pretty fun. As we all know, memories can be a treacherous thing and the reality can be quite different from the nostalgic recollections one has of a game. Find out whether or not that is the case for Pandemonium right after the jump!

Before I really get started with this, I just want to mention that I used a level select cheat. The reason for that is that I did not want to write a review based on the first six levels or so, but of the entire game. I didn’t finish many levels and I won’t comment on the difficulty outside of saying that this is a challenging game. So take this review with a grain of salt. Well, you should do that anyway.

Pandemonium is, at least at first sight, a basic platformer. What was interesting at the time was its use of the camera: It has 3D environments and the camera shifts the perspective quite a lot during the levels. It’s an interesting twist for a time when every old Jump and Run franchise tried to emulate Mario 6 and it still holds up quite well today. There are some instances where you don’t know where the character will run too if you press a button, but in most cases, it doesn’t get into the way of the fun.

As I already said: It’s only basic at first sight, because there are a few new mechanics thrown in later on. You can gain magic projectile weapons with which you can shoot enemies and sometimes solve some little puzzles. The most fun weapon is the ice beam which freezes your enemies and that let’s you burst their ice statues. The shrink beam is a close second though! There are also some passages where you get transformed into a fire-breathing dragon with the ability to fly around. Those are a nice change of pace but nothing too extraordinary.
There isn’t a whole lot to collect in this game outside of treasures, which is only of interest in order to get more lives or if you’re a completionist. Keys are needed in order to trigger some changes in the environment, most of the times to open something like a door. The overall level design is challenging and has some variety to it, without being confusing, which makes the title fun to play.

However, I found the controls to be a bit stiff. The double jump was especially hard to use at times and I don’t know whether that is a PAL specific problem. It’s also hard to see whether or not you’re going to land on an enemy the right way to destroy it, so hit detection seems a bit off at times. The graphics have not aged well, just as you’d expect it from old games from that particular era. Still, good use of colors, imaginative designs and a great feeling of continuity between the levels make it memorable.

This is an impressive Jump and Run game that has a few flaws and hasn’t aged that well in terms of graphics. Still, the game is worth a look, especially for fans of the genre, as it is still a lot of fun to play. Final Score: B.