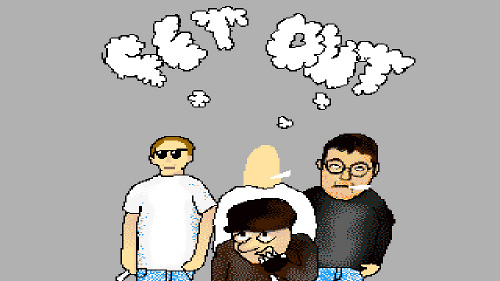 So this post has very little to do with Sega. I’m sorry. But for those of you who listen to The Sega Addicts Kids Table (a totally rad podcast) you’ll probably know what I’m talking about when I mention the bizarre indie title RE: Get to Schol on Time. It’s a game that I personally adore and once I had finished it, I knew I had to contact the studio that made it.

Thankfully I managed to get a hold of Famicon. An elusive and mysterious entity that I was fortunate enough to spend some time with. The following is a result of an interview which sort of includes a Sega reference, but not really. You’ll see. Hit the jump to read all about Famicon’s inspirations, aspirations, and much more.

Hello Famicon and thank you for your time. So to start off how would you introduce yourself to anyone who hasn’t heard/played your games?

Famicon is a UK collective Probably best known for videos at youtube (http://www.youtube.com/user/famicon2008) also produces books and blogs for the NY based publishing house pictureboxinc.com. Our former manager Mike is sitting in on this too since he was heavily involved with our day to day lives during the time when the game was first released in 2004.

About your game ‘RE: Get to Schol on Time’. How did the idea come about and why did you make it?

Each section of the game is a lesson for the player. But you can also appreciate it only at face value, if you don’t want to learn more

You can do anything, as long as you don’t do nothing

Give people what they want, before they know they want it

Take what you can and give nothing back

How did Famicon get started?

In 2004 Lawrence and Michaels HK based talent agency went bankrupt so we moved back to England and needed something to focus positive energy on, so we worked with our closest friends and family on any projects that otherwise had no commercial value or viability…

Do you feel truancy is really an issue?

Since this is a Sega orientated site I have to ask ‘What are your Sega inspirations?’ and ‘what are your favourite Sega games’?

What’s next for Famicon or the ‘Get to Schol on Time’ franchise?

Pc players will soon be able to play the game thanks to Desura, it will include the OST as part of the package.

Got anything to plug?

And finally we have a question from Scott Morrison- “Any chance for an added mode to play as the bear?”

Scot, It is a wolf! If the game does well on Desura we would certainly plan some updates.

And like that the interview was over. A short but fun questioning that left me enchanted, yet haunted at the same time. By the way you can get the game we mentioned RE: Get to Schol on Time, on iOS and XBLA indie games. I hope you enjoyed this interview and I am sorry it had nothing to do with Sega. Good night.