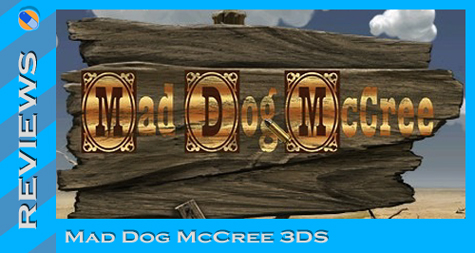 Welp. I think it’s best time to mosey on over to the eShop channel here on my little ol’ 3DS and take a gander and what’s new in the downloadin’. Well snap my suspenders and call me hogtied, it’s Mad Dog McCree! That game was on the corn-swabbled Sega CD! I can’t believe I get to play it in 3D now with my pencil doo-hickey and everything! Hit that thar “jump” button to see if I’ve really gone completely loco or if I just enjoy talkin’ like this while I play Mad Dog McCree and be watchin’ them reruns of Bonanza.

As much as I would love to continue with the western cliches, I’m going to put a halt on those for the sake of my sanity and yours. Mad Dog McCree released on the Sega CD in 1990 during the FMV era. In the lovely rad 90s, any video on a CD-based console appeared pixilated and choppy, but Mad Dog actually appears just as crisp as it would if the game were an actual TV show. The only 3D portion of Mad Dog McCree though is the logo you select on the 3DS’s home screen. Having never played the original game, I assumed I was in store for a simple on-rails shooter with some 90s charm. Half of that statement held true as I flew through the game on “Medium” in about 30 minutes, but the charm was left out in the desert with the tumbleweeds.

Mad Dog McCree welcomes you with the title on the top 3DS screen, and nothing but a metal plate on the bottom touch screen. Noticing that the bullet cursor did not move when I used the slide pad, I put the stylus to the metal plate and navigated through menus while accidentally clicking options I did not want, because I was required to use the stylus to drag and then click with the bullet cursor. Would it have been that difficult to map the clicking to a face button? This is a minor complaint, but strikes me as an inconvenience nonetheless.

As I said, Mad Dog released during the FMV era, where FMV games were stereotyped as B-Movies on consoles, and Mad Dog lives up to this title. When beginning the game, a young lady who introduces herself as the mayor’s daughter greets you. Wondering if she has had too many sips of moonshine, you continue into town. When arriving in town, the prospector, who then becomes your guide through out the game, immediately greets you lays out the plot. The prospector begs for help dealing with Mad Dog and is then immediately shot from a random enemy. Having never played this game before, I had no idea if there were going to be cues between cutscenes and gameplay, so I had to repeat the very first enemy encounter of the game. Aw shucks!

When engaging enemies in shoot-outs, the game slightly pauses just before an enemy appears, which greatly helps out first-time players like myself. The controls seem to be simplistic to a fault as you use the bottom touch screen to move the cursor and fire your gun with either the right or left shoulder button. To reload, you must remove the stylus from the screen and then press one of the shoulders buttons. In essence, the game uses 3 out of 11 possible buttons (counting the D-Pad as 4), to make for an incredibly awkward reloading sequence. These controls prove to be the most intrusive when you engage in quick draw battles. During a quick draw, you have no bullets loaded and are forced to reload before firing. You can imagine that I did not succeed in my first few quick draw encounters until I learned to mash the stylus on the screen along with the left shoulder button in hopes of firing a bullet faster than my opponent. I feel that these complications could have been easily avoided if any button on the 3DS was chosen as a reload button. I should take this time to point out that there is no option of mapping the buttons in any other fashion, so you are forced to hold the 3DS with one hand while controlling your crosshair with the other.

The game gives you an option of starting in one of four areas: Corral, Saloon, Sheriff’s Office, and Bank. You soon learn, however, that there is a selected path you must follow by first going to the Saloon to get a key to unlock the sheriff from his own jail–no wonder this town is in so much trouble. Each stage has a slew of enemies, which increases in number and quickness as you increase the difficulty level. Enemies attack you from the standard positions: behind barrels, around corners, rolling on the ground. The most entertaining deaths from enemies come from literally every single railing or rooftop kill, because they are followed with an overly dramatic slow-motion sequence. Without even thinking about it, I soon found myself slowly yelling, “Noooooo,” whenever an enemy plummeted to their dusty death.

The gentleman in the background is pretty excited to see the sheriff, played by Daniel Craig’s father

To earn a larger round of bullets, you can shoot a cow skull and in turn rack up your Sharpshooter Bonus by shooting enemies consecutively. The point of the game is to earn the highest score while saving the idiot town from Mad Dog McCree. How this town operates on its own is beyond me, but perhaps that question is answered in the sequel.

Mad Dog McCree has a slight bit of charm as you can’t help but laugh at the cheesy script and poorly delivered dialogue. I honestly feel that this game would make less sense but be more entertaining if they just threw in random bits from episodes of Bonanza and Gun Smoke. Actually, maybe the game would make more sense that way? Either way, this town is one I will not be revisiting any time soon. No matter how desperate or drunk the mayor’s daughter may be. 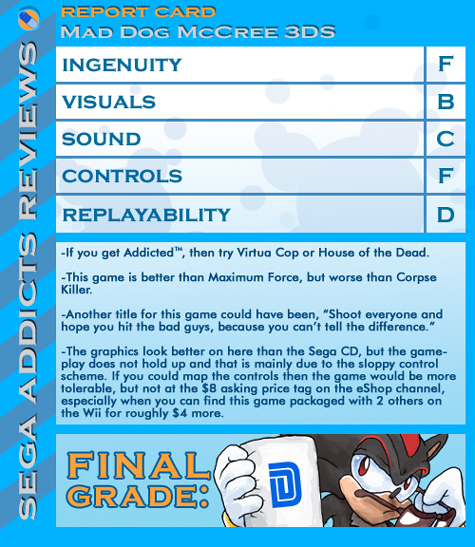 Mad Dog McCree is releasing on PSN for some reason