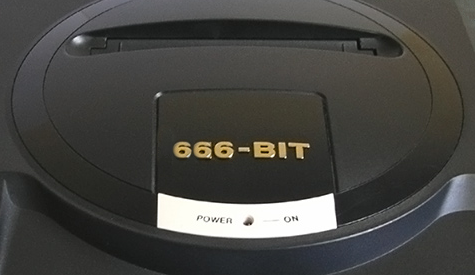 In part three of this blood drenched tale Henry reached the cottage’s loft to find a shrine entered around a Sega Mega Drive. Ignoring the pleads of The Reverend, Henry activated the device initiating a turn of events that may endanger the entire world.

Is this the end of the world as we know it? What exactly is being displayed on the Mega Drive’s television screen? Join us, ye intrepid Sega Addicts, as we present the forth and final part of this interdimensional tale of one man’s struggle to retain his sanity in the fight for the world. Hit the jump to read on but be warned, to explain this story to your mum will take ages.

The television had turned on by itself and the image of television static slowly appeared as the cathode ray tube within warmed. In the top right hand corner the channel number was shown in green: 666. Henry then noticed that the the static on screen was swirling, like a whirlpool, round and round, faster and faster.

“The beast! He must not emerge from the abyss!” The Reverend leapt towards the Mega Drive’s power switch however, just as soon as he had reached it he was blown back across the loft by a tremendous electrical force. The Mega Drive itself was now levitating off the ground, being pulled in the direction of the laser beam it was emitting, its connection into the television anchoring it.

Suddenly the glass screen of the television exploded outwards and Henry shrieked as his face was sliced by the shards of flying glass. He whimpered and crawled backwards as the spiralling vortex of static widened and a thin, blue arm connected to a spindly, clawed hand reached out towards him. He fumbled with his shotgun, dropping it, unable to take his eyes off the arm. The flesh on the arm was rotten, and in places the bone was visible. Even so, the arm seemed to stretch longer, its clawed hand growing bigger.

It grabbed hold of his right leg, its sharp claws sliced straight through his flesh and as it did, another hand emerged from the screen followed by the face of its owner.

A single, white, glowing eye with two jet black pupils glared at him from behind a large, black, tumorous nose. The creature’s blue, spherical head sat atop a long neck that protruded from the vortex, and was lined with large reptilian spines. Its head bobbed from side to side, revealing razor sharp fangs that glistened in the moonlight. Large patches of its blue skin were consumed by puss filled sores and necrotic scabs.

The eyes widened, fixated on Henry, and then, the voice.

Half words, half roar, Henry immediately recognised the sound from his dream, the sound of a thousand affiliated souls.

“AFTER TEN-THOUSAND YEARS I’M FREE. TIME TO CONQUER THE PLANET AS COOL AND BLUE AS ME!”

Henry screamed as he was dragged closer and closer to the creature’s gaping jaw. He felt the warm, deep breaths of the beast pass over his body. The gusts reeked of a thousand corpses left to rot over a thousand years and with each foul breath he could hear the same faint screams of a thousand tormented souls.

The sound was interrupted by the blast of the shotgun unloading into the face of the monster. It roared one more, releasing its grip on Henry’s leg long enough for him to scurry straight into the shotgun wielding Reverend.

“And the devil that deceived them,” He fired the shotgun again, this time blowing the clawed hand clean off the creature’s arm.

“was cast into the lake of fire and brimstone,” A second shot blew chucks of the reeling creature’s face off, which were caught and sucked into the whirling abyss,.

“where the beast and the false prophet are,” The third shot blew off the creature’s bulbous black nose. A black liquid oozed from the rotten craters in its face.

“and shall be tormented” A fourth shot, “day and night,” A fifth, “for ever”, A sixth, “and EVER!” The final shot blew the creature’s jaw clean off. It howled and flailed it arms about before landing on the ground, its posterior still on the other side of the vortex.

The Reverend took a few steps forward towards Henry before falling forward onto his hands and knees. “Henry, only you can turn off the infernal machine…”

Henry stared at the downed creature for a few moments, then looked up at the maroon moon. Against his fears he hobbled over to where the Mega Drive was levitating and reached for the power switch. He felt some resistance and a surge of pain shot up his arm, but he pushed on. He watched the hair on his hand stand on end before burning away, his hand felling hot and as his skin reddened and started flaking away. Arcs of electricity burst from the console, whipping at Henry’s hand, ripping away his skin and flesh. His finger tips, which were nothing more than scorched bone, brushed against the switch. Henry screamed and pushed with all his might, flicking the switch off. The resistance subsided immediately as the Mega Drive hit the floor and Henry fell backwards, clutching his ruined hand.

Henry looked up and saw that the laser had vanished and the moon had returned to its pleasant grey glow. He bent his head forward to see what had become of the blue demon but was face to face with its remaining hand. Its bony fingers clutched his head, dragging him towards the television. The vortex was now working in reverse, moving back into the television, sucking the creature in with it. He heard it breathing again, laughing, dragging Henry with him. He tried to struggle free, but the creature’s claws dug into his scalp and into the flesh of his face.

The Reverend watched as the hand dragged Henry into the television and he listened to his screams ebbing away. Finally the vortex disappeared and all life from the television died out. He clutched the cross that hung around his neck and collapsed to the floor.

It had only been 10 minutes or so since The Reverend had gone back into the building to ensure that Henry Gelson had been stopped, but there was no doubt in the minds of any of the old men and women watching the blazing cottage that neither of them would survive. Those members of the Glumleigh council that hadn’t already scarpered back to their homes when the laser erupted from the roof of the cottage stayed just to watch the show. The laser remained on for no more than 5 minutes until it abruptly disappeared. Soon after, the proximity of the growing fire caused the outside fuel tank to heat up and explode in a great fireball that blew away one side of the cottage’s ancient stone walls, and the entire structure folded in on itself.

The fire was eventually extinguished by the relentless snow storm and the people of the Glumleigh council went wearily back to their warm beds. Days past and eventually normality in Glumleigh was restored as its residents look forward to the winter holidays. No policemen ever set foot on Gelson’s farm as no police report of the fire was ever filed. Back in Leeds the papers reported the death of a young man found in the river Aire, although no body was ever seen by those reporting the story, and quite frankly no one in the big city really cared.

Dave and his younger brother Charlie had gone up the the old Gelson’s farm after an unsuccessful night’s trick-or-treating. Most residents of Glumleigh answered their doors either annoyed or confused at the sight of the two brothers, aged 8 and 15. Dave had simply stapled cardboard cut outs of bones to his clothes, while Charlie had shown some imagination in his toilet roll mummy costume.

“Dave… You know our mam says not to come out this far. Dave, they says this ‘ere farm is haunted, I say, haunted!”

Charlie shuffled over the ruins of the old cottage towards where his brother was crouched.

“Charlie, come o’er ‘ere with that there torch of yours, eh?”

Charlie changed from a shuffle into a jog, scared to be too far from his older, and clearly braver brother. He put on arm on Dave’s shoulder and shined the torch over the strange black object he held.

“Dave… Dave, we should get out’er here… Dave, what is that thing? Oh… Put it down Dave!”

“Nah, we’re keeping it. I dunno what it is, but it looks cool alright. It feels cool.”

Charlie squinted in the harsh light of the torch, trying to get a glimpse of the mysterious object. On the front were two words in a strange font he couldn’t quite read. He leaned closer, staring a few seconds before he managed to make out the words, speaking them in an almost inaudible whisper.

The Bi-Weekly Contest: Seaman and NHL ’94

Sega cleans house at Smithsonian’s The Art of Video Games