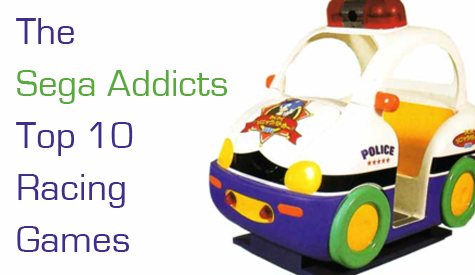 Sega Addicts, start your engines! With the release of Sonic & All-Stars Racing: Transformed this month, we thought it would be a great time to highlight some of our favorite racing games that have appeared on Sega consoles or were published by Sega throughout the years.

Hit the jump to read about our 10 favorite racing games. 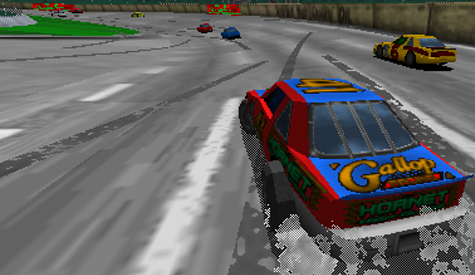 Brett Hatfield: If you were expecting anything else to top this list, you’re mad. The most successful arcade racing game of all time, and one of AM2’s crowning achievements. A lot of racing games don’t exactly age very well, but Daytona, in spite of its simplicity of only having three tracks, seems to get even better with time no matter what it’s being played on. Last year’s HD port only added to the game’s outstanding legacy, especially with the new modes, and and is a must have for any Sega or racing fan. 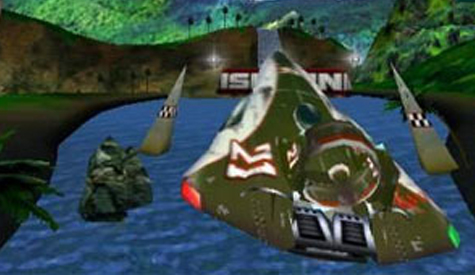 Scott Morrison: Hydro Thunder somehow made boats EXTREME in 1999, and I wanted everything to do with it. The Dreamcast had beautiful water effects, which greatly showed in Hydro Thunder as well. The game was very easy to jump into, but grew challenging if you stuck with it. Nearly every level felt like an epic adventure or action movie to the point that I found myself getting distracted with the scenery in some levels. Boats varied from speedboats and space-age ships, to miniature Titanics and even a rubber ducky.

Something about Hydro Thunder’s simplicity and eye candy makes the game very addictive. “Just one more race,” is a phrase that often went through my head, and still does when I play its spiritual sequel Hydro Thunder Hurricane. Unlocking boats and new tracks was an easy incentive, but the fact that you unlocked something after almost every race in the beginning was a great way to keep people playing. Four-player races can also be a blast even if you barely encounter each other, because there is enough chaos throughout each race to promote yelling at the TV. A great party game, and an enjoyable ride in general, Hydro Thunder fits nicely into any collection. 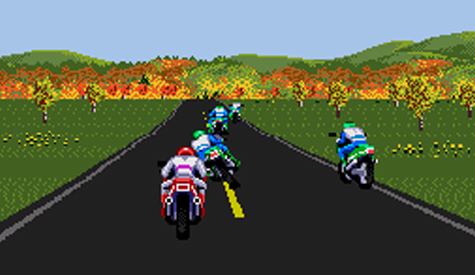 Scott Morrison: The 90s were a wonderful decade of “attitude” and “radical dudes,” and the Road Rash series fit right in. Rock music, swinging chains, motorcycles, running from Cops. Road Rash had the perfect recipe for being “bad.” Road Rash 2 stands out in the Genesis trilogy to me, because it kept things simple while adding small necessities such as additional weapons and varying levels. While games like SpyHunter and Micro Machines introduced vehicular combat before Road Rash 2, nothing had quite yet developed the light-hearted enjoyment through any type of co-op game where you could either destroy your friend, or help him rake in the dough from illegal motorcycle races.

One of the more charming aspects of Road Rash 2 was the fact that your opponents had names, and with those names you created identities, and more importantly: rivalries. Every time Biff or Natasha’s name jumped on your screen you were determined to take their spot in the race by means of stealing their weapon and then beating them senseless with it. And at the end of each race, when you watched those comical stick-figure cut scenes of your victories, you always told yourself that the jerk crashing into a tree was that guy from whom you stole first place.

Road Rash 2 is a quality example of how wholesome violence in a video game can turn anyone’s day around once you give an opponent their well-deserved clubbing and take that sweet prize money that you rightfully deserved, along with those trophy babes. 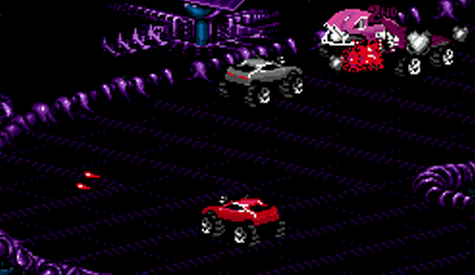 Brett Hatfield: When practically everyone else under the sun had Mario Kart as their first kart racing experience, this was what I had. Many a night in my childhood was spent playing, or watching my parents play Blizzard’s unique 70s-rock-anthem-filled sci-fi racer. While it hasn’t aged as well as I originally thought when I first wrote about it here, thanks to the awkwardness of the isometric viewpoint, it’s still a fun little trip down memory lane. 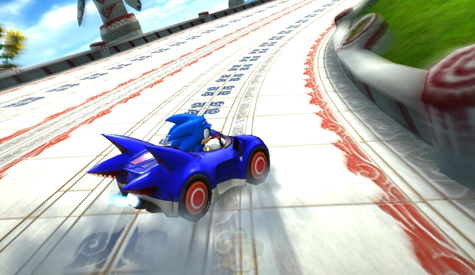 Mike Kyzivat: This is a must have game for any old school Sega fans and anyone who loves kart racers.  The amount of nostalgia in this game is awesome.  Characters I haven’t seen since the Master System days are here racing Sonic and the gang.  Do you remember Opa-Opa?  How about Alex Kidd or the Bonanza Bros?  If so, then this game is for you.  But it’s not all call backs and references to past games, it is also a solid kart racing game thanks to Sumo Digital’s expertise.  While it does borrow a lot from previous Mario Karts, it has also distinguished it self game play wise.  While racing you can hit the power drift button when you take a sharp turn. Not only will this help you take the curve at a faster speed, but it will also build up a turbo boost that will be set off once you let go of the drift button (provided you don’t run into anything while drifting).  This gives you a little extra boost coming out of the turn, and helps you catch up to the person in first place.  There is also a wide variety of racers to choose from: Sonic, and most of the cast from Sonic Adventure, B.D. Joe from Crazy Taxi, Ryo from Shenmue, Beat from Jet Set Radio, Billy Hatcher, and even some obscure characters like Zobio and Zobiko from a House of the Dead arcade game that was only released in Japan.  The only weakness to this game is the levels. It would have been nice to see levels based on all the characters, but as it is, only a few characters are represented in the track department.  Now, don’t get me wrong the tracks are great and have many novel and cool twists and turns, it just would have been nice to see a nights level, or an Opa-Opa level, but I hope this will be remedied in the sequel Sonic All-Stars Racing: Transformed. 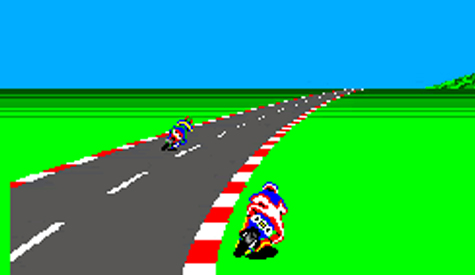 Mike Kyzivat: Ah Hang-On, a game I never would have played if it hadn’t come with the Sega Master System.  I’ll come right out and say it, I am not a big fan of racing games; especially ones that don’t have machine guns mounted on the hoods of the cars, but after giving Hang-On a chance it was a fun, if simplistic, motorcycle racing game. You basically race the same cloned opponent over terrain that varies from green backgrounds with odd looking Frank Lloyd Wright designed homes in the background to the city skyline at night with a blue background.  But at the time it was a state of the art game, you basically had to balance not crashing your bike on some sharp turns, but also keep a good pace so you don’t run out of time before you reach the next checkpoint.  It was a simplistic formula, but a fun one.  I remember the countless times I’d start to skid out and get dangerously close to the peppermint striping that hugged the side of each road. Then you’d have to let up on the gas just enough to keep from wiping out, but still be able to pass up the 100th motorcycle clone in the race. It would be a perfect gateway racing game for a kid, not too hard and complicated that they give up, but not too easy that it’s no fun either. 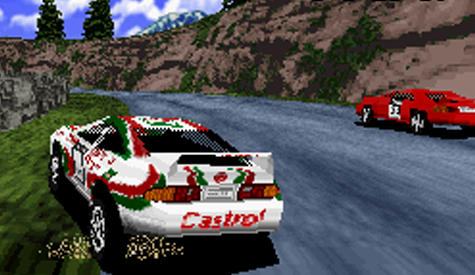 Josh Newey: It would be out and out blasphemy if a Sega-based racing list didn’t have the Sega Rally series placed somewhere on that thing. More than just a great racing sim with ahead-of-its-time physics and visuals, Sega Rally Championship was a pioneering example of the genre, with innovative new features like varying terrain that affected how your car handled, and early co-op racing that wasn’t as ubiquitous as it is now. Even though the original game came out in 1994, it’s still held in extremely high regard, as the racing physics and the staggering dedication to realism keeps it relevant and a blast to play. Since its original release, the Sega Rally series has informed countless other benchmark racing titles like the original Gran Turismo and the Colin McRae series. On a side note, Sega Rally 2 on the Dreamcast is also a fantastic racing sim, with a similar focus on the mixture of realism and arcadey fun that kept the first game so accessible yet deep. 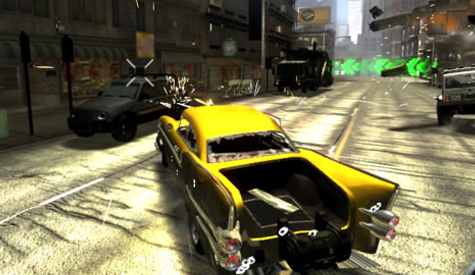 Alex Riggen: Full Auto was one of the first 360 games I ever owned and I still consider it to be one of my favorite multiplayer games on the system. It takes the car combat idea of games like Twisted Metal and Vigilante 8 and mixes it with a more racing-centric game like Burnout to create something unique and a blast to play. It also did a great job of making use of the 360’s power with tons of destructible environments and vehicles that could not have been accomplished at the same level on previous hardware. The amount of content in the game alone makes it impressive with a large selection of modes, tracks and vehicles giving you and a group friends the opportunity to lose hours to the games multiplayer modes. 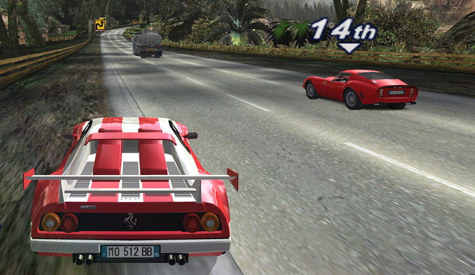 Alex Riggen: I’ve made it known hundreds of times but the OutRun franchise is one of my favorite things that Sega releases. From the arcade original to some of early sequels (which only received poor ports on home consoles) I love the main gameplay hook as you race the clock and choose your own path to a variety of completely different environments. Sumo Digital’s official sequel, OutRun 2, kept everything that made the original game great and brings it into the next generation. The graphics keep the bright colors and Sega blue skies that made the first so iconic but adds full 3D models and environments that look amazing today even though the game comes from the previous generation. In addition, the ability to select from a variety of real-life Ferraris and the new drift mechanic add just enough to add some depth to the gameplay. While the game did receive an HD XBLA release which got pulled last year, I still recommend the PS2, Xbox or PSP version as they added a ton of modes and challenges to the arcade game which will keep anyone busy for quite awhile. 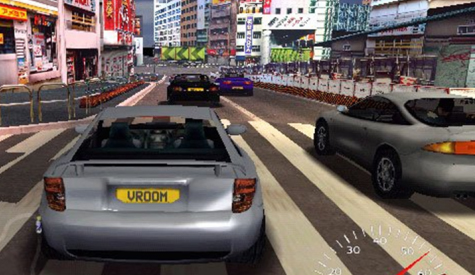 Josh Newey: It takes a lot for me to be sucked into a racing game. I don’t know the first thing about cars, so the mechanical porn that some titles rely on just doesn’t turn me on the way it’s meant to. But something about MSR just hooked me right off the bat. First off, the game’s hyper-realistic and slavishly accurate depictions of Tokyo, San Francisco and London are something to behold, even a decade down the road. I remember being absolutely captivated by the visual prowess of this glossy, stylish game, and while I could never penetrate its prohibitive difficulty, my frustration was usually mitigated by the game’s proud and charming sense of “cool.” What really drove this game’s challenge was the “Kudos” points system, which rewarded and punished players based on their skill, handling, and speed throughout a race. While being punished for your mistakes can be quite crushing, accruing a solid ramp of kudos is supremely satisfying, and offers an extra, motivational carrot in a genre that feels far too black and white in terms of rewards. In most games, falling behind in a race means failure right off the bat. In MSR, your successes come from how you drive, not just if you win.

If you’re curious what an MSR game would be like today, check out the Project Gotham Racing series, also developed by Bizarre Creations, as this wonderful Dreamcast game laid the groundwork for what is now considered one of the best racing franchises on modern consoles. 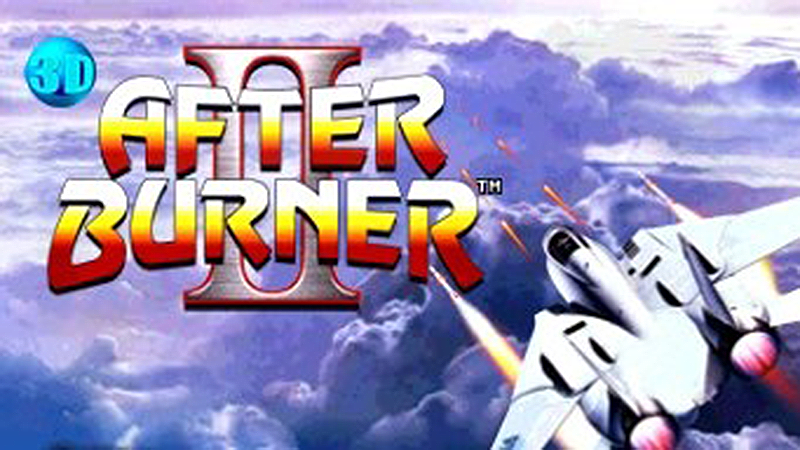