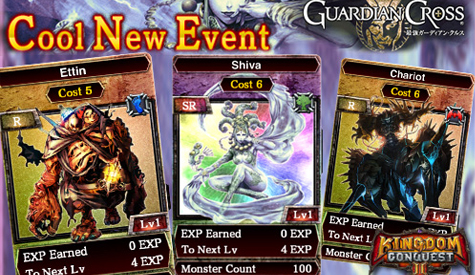 Sega has teamed up with Square Enix to produce some in-game content for Kingdom Conquest II based on Square’s Guardian Cross card battle RPG.

– Players receiving a “Gold Slime” R Monster for every day they login.

– The ability to buy Guardian Cross Monster Cards from the Shop.

– A special event where you work with your Alliance to challenge the special guests and get a “Shiva” R Monster card.

Sounds like a lot going on in the Kingdom Conquest II universe. Anyone currently playing the game on mobile devices? Are you familiar with Square Enix’s Guardian Cross?

Sonic Dash is out today