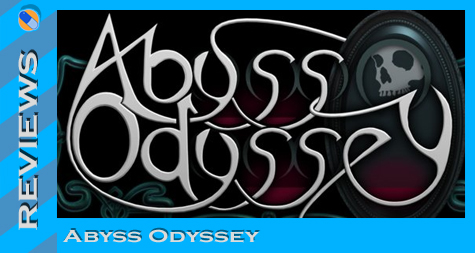 ACE Team is one of the few non-japanese developers, what I can think of, responsible for creating absolutely bizarre and at times borderline insane games. Thankfully, they can also back up strange visuals and amusing ideas with very solid gameplay. Both Zeno Clash games were thoroughly enjoyable first-person beat’em ups and Rock of Ages was a hilarious mix of tower defence with Super Monkey Ball. ACE Team’s previous game, while enjoyable, also happened to be just a sequel to Zeno Clash. There is nothing terribly wrong with that, it’s just slightly disappointing to see “more of the same” after such a bold step in the different direction as Rock of Ages. Can the studio’s new game once again reignite the fire in our bellies? Let’s find out.

In 1890, in the city of Santiago, all kinds of horrible monstrosities are getting out of cracks in the ground to do bad things to humanity. These creatures are materialized fragments of imagination of Warlock sleeping deep down in the Abyss. To put an end to his walking nightmares, players must descend into the ground while controlling colorful characters like Katrien, a mysterious female swordsman who also happens to be a part of Warlock’s dream. So, basically you’re fighting against Cthulhu over here. If that’s not a creative setup, then I don’t know what is.

The game itself is a roguelike action platformer, which takes certain elements from Castlevania, Dark Souls, various fighting games and even Pokémon, as weird as it may sound. Players progress through three branches of randomly generated stages. The branches have their own level of difficulty and also connected with each other at certain locations, so you can freely jump around if you’re feeling overwhelmed. As with similar games of the genre, after each death, the stages reorganize into a new order. With that being said, permadeath doesn’t work exactly as you might expect. Dying strips your character of acquired items and weapons, but you never lose your experience, gold and skills. In the end, it creates a slightly different dynamic, but there’s still plenty of challenge left here. 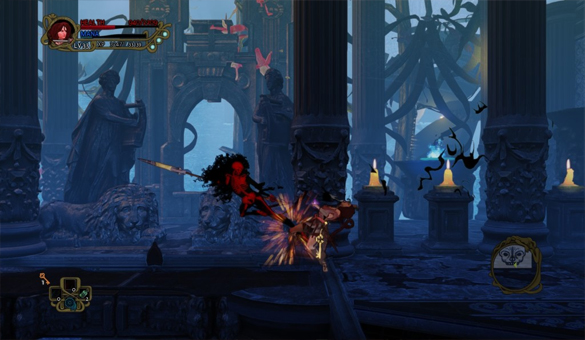 While exploration is a big part of the game, the majority of the time you’ll be spending fighting all sorts of strange creatures. Lucky for us, Abyss Odyssey provides the player with complex battle system very reminiscent of what you may find in competitive fighting games. Your character’s move set consists of the usual ground combo, launcher, sweep attack, throw and various special abilities which can function as amplified versions of these moves. The meat of the battle system, however, is in its defensive play. Your character can dash in both directions while being both on the ground or airborne. Dashes also function as a way to cancel any available attack. Guard is not a permanent solution, as your enemies can easily guard break you, so you might want to get a hold of the game’s parry system. In those often instances, Abyss Odyssey functions as a fighting game and uses the same mentality. It’s all about timing and mind games. Thankfully, the opponents are quite smart and will be putting your skills to the test.

Between enemy encounters, you’ll be exploring stages for loot, weapons and secret locations, all while avoiding different kinds of obstacles, ranging from lava pits to guillotines and spikes. Since your character has a pretty good mobility, platforming becomes fluid and satisfying, and never ruins the pace. On your adventure, you’ll also be encountering stronger red enemies (which look suspiciously like Dark Souls’ phantoms). They serve as the game’s bosses and provide tought one-on-one duels. If you would be unfortunate to die in the fight or at any other point in the game, for that matter, you will be controlling the soldier of the Chilean army until you find a resurrection shrine. Think of it as becoming Hollow in Dark Souls. The soldier has a unique move set, and while he’s definitely weaker, with enough skill you will be able to clutch it out until the next shrine. 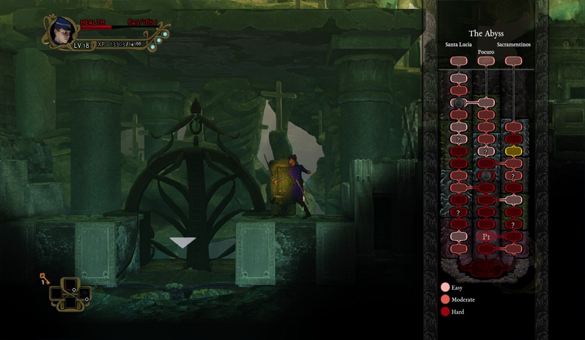 Speaking of characters, there are a lot more playable than just your three main ones. Besides soldier (which serves as your second life of sorts), by filling up your Mana meter, you can catch any enemy below your experience level like a Pokémon. Acquired enemy becomes your second playable character, who you can switch to on the go and use as another life, since upon death you just lose him, but not your main character. Even if you’re having trouble filling up the Mana meter, there’s an option to buy a playable character in the shop or get one by surviving a special stage randomly placed on the map. Each enemy type has a unique set of moves with its strengths and weaknesses. In other words, technically you can have up to 3 lives to get through the game.

The game never really ends, as after defeating the Warlock, you loop and continue another session. And that’s the whole point of this sub-genre: to get a familiar yet unique experience for as long as you want. Each run can be completed between 1-3 hours depending on the branch you choose and the difficulty of the enemy encounters. Considering the short length, you can’t really save the game in a traditional sense. When you quit, you’ll contain your experience and gold, but not your progress. There is a way of saving the game mid-run, though, with the help of purchasable “Camp Tokens”, which turn resurrection shrines into checkpoints. 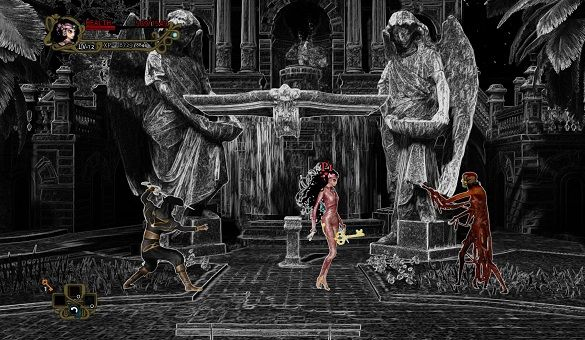 As with other works of ACE Team, it’s hard not to be impressed by Abyss Odyssey’ artistic side. Beautiful painting-like worlds inspired by Art Nouveau feels incredibly soothing and frightening at the same time. Character portraits are some of the most pleasant ones I’ve ever seen in a videogame. The soundtrack, which consist of a few truly mesmerizing tunes, helps create a wonderfully melancholy atmosphere. The technical side, on the other hand, can’t always keep up with the artistic direction. In-game graphics look a bit too blurry at times and frame rate dips below 20 with every new room loading. I also encountered occasional glitches which place some items inside platforms and walls. Nothing game-breaking, but it still makes your experience less enjoyable. The co-op experience also suffers from unfortunate glitches and inconsistent camera.

For this review I did about 5 runs of the game and I feel like I’m only getting started. There is peace for now, but the monsters will return when Warlock dreams again. 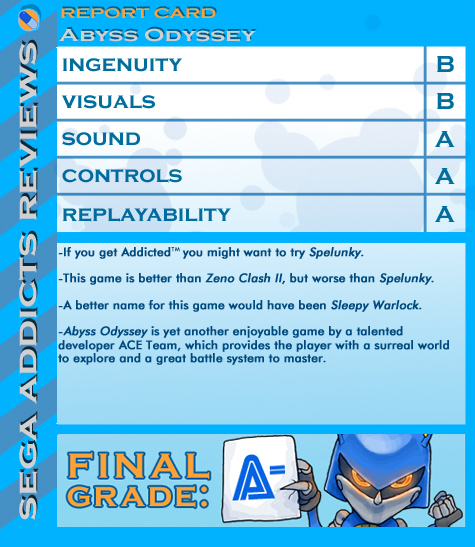 The Sega Addicts Kids Table: Episode 22 – The Prince, the Pregnancy and the 800 Pound Gorilla