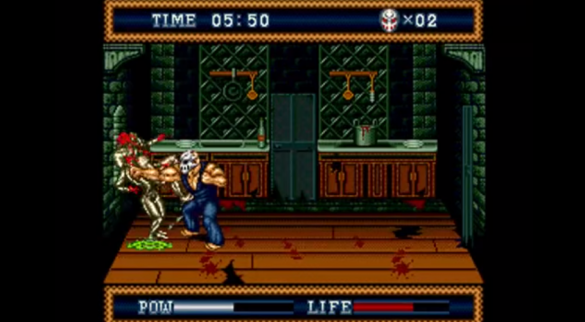 The third title in the mainline Splatterhouse games marked a dramatic departure for the series. There was both refinement and revolution as greater emphasis on the cinematic roots and an overhaul of the play style brought Splatterhouse 3 up-to-date with competing titles in the genre. These comprehensive changes marked the first time the series had tried to match its compelling, visceral, themes with equally captivating game play. This new found depth would contribute to Splatterhouse 3 becoming undoubtedly the best Splatterhouse of the 16-bit era, and a game worth playing for more than shock value alone. 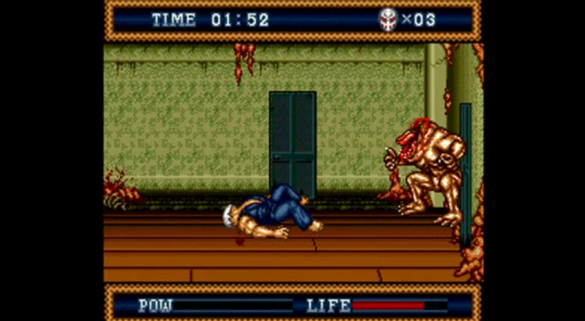 As expected of a series that had relied on style over substance for so long, the presentation was refined yet further. The gore-swathed levels are, by this stage in the series, par for the course, as are the large sprites possessing a heft not seen outside Venice Beach. The creeping, perfidious influence of FMV was not far from Splatterhouse 3. How could it not given the series’ cinematic heritage? Fortunately, the humble Genesis was only capable of movie-style stills as part of the presentation, limiting the potential damage of low-fidelity cinematics. The quality here outstrips previous titles and is used to tell a more rounded story, with several of the images even adopting a cinematic aspect ratio complete with letterboxing. Such touches complement the game’s ambiance and feel like a natural extension of the series’ themes. 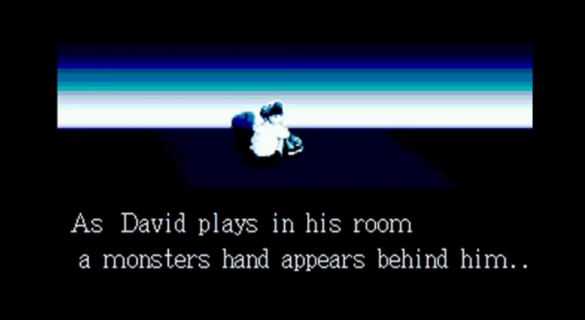 It is; however, the addition of depth to the playing area that moves Splatterhouse 3 from refinement to revolution – the importance of which cannot be overstated. At the most basic level, it brought Splatterhouse 3 in line with other popular brawlers of the day; Sega’s own Streets of Rage and, of course, Capcom’s Final Fight. Consequently, rather than restricting the player to one plane of movement, and thus a limited number of enemy attack patterns, a wider variety of challenges could be faced. For the first time in the main series, the player is given the tools to properly cope with the difficulty. Rick is given a far more varied move set including combos, grabs, moves with invincibility frames and a special ‘beast mode’. Movement is similarly sharpened, with Rick’s treacle-laden responses from previous games being upgraded. They are still some way short of the genre’s best, and the jump remains unresponsive and leaden. Nevertheless it is an improvement on previous titles and the net result is a more fluid experience; not as good as the best in the genre, but no longer separated by a gaping chasm. The brawler had moved on since 1988, and fortunately, Splatterhouse 3 finally moved with the times.

There is even some genuine innovation. Splatterhouse 3 is no longer a mere linear brawler. Rather, each level is given a time limit and a map with a target marking the boss. The player must guide Rick to victory over the boss within the limit, otherwise the story, once again centered on the rescue of Jennifer, will be given a negative twist. Impressively, the direct route to the destination is populated by the most challenging enemies. This adds a genuinely engaging risk/reward decision to be made between taking a beeline or exploring and circumventing some of the more challenging rooms. The time limit itself is well pitched, not so easy as to make the mechanic worthless, but not so punishing as to disillusion the player. The fact that it influences the outcome of the game into one of four endings contributes greatly to the replay value, a first for a numbered Splatterhouse title. 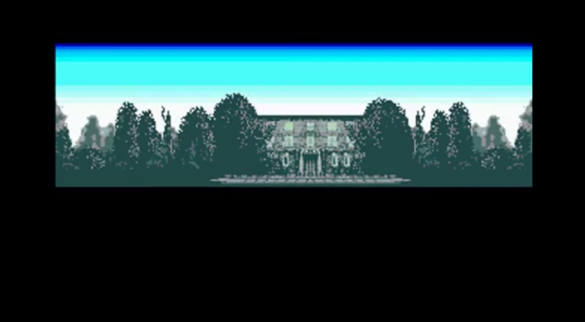 Whilst Splatterhouse 3 is a hot meal for a series that had long been wandering, alone in the cold, many of its changes are still mechanically and thematically derivative. Fortunately, they are derived from some of the best in the genre. The genuine innovation that is seen is let down somewhat by the execution common to Splatterhouse titles; never being quite as fluid or quite as fun as the best. Had the game play made similar strides to the game design, this would have been more than the finest Splatterhouse title. As it is, Splatterhouse 3 is a solid addition to the Genesis library where, for the first time, the uniquely compelling schlock-horror themes are complemented by improved mechanics and a huge increase in literal and figurative depth. It is undeniably the best Splatterhouse of the 1990s and worth pursuing for any collector of the 16-bit era.