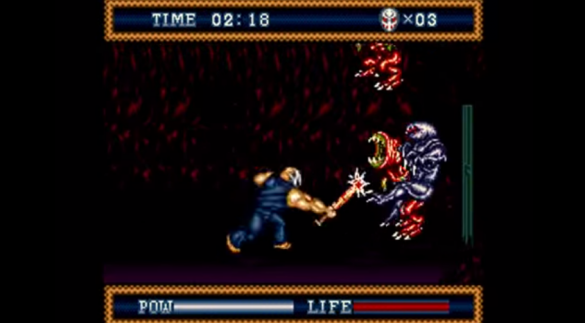 Splatterhouse 3 is an interesting beast. If you have played either of its precursors, you will expect an unfair game covered in gore and questionable content, and rightly so. The third iteration in this bloody homage to horror does a few things different while still maintaining the gross theme that everyone has come to recognize and even love with the Splatterhouse series. But is the third installment worth playing after the first and second barely differ from each other? Well, does Jason Vorhees hate virgins?

The first thing you’ll notice when playing Splatterhouse 3 is you are no longer limited to a single plane where you can only travel left or right. This time around, as Harry pointed out, it is more along the style of Streets of Rage, where you can travel up and down the screen. This can actually make the game slightly more challenging until you learn enemy patterns and plan accordingly, or in my case just keep spamming the tornado kick to destroy anything nearby.

With its varying paths, and multiple endings, Splatterhouse 3 has a decent amount of replay value for differing reasons compared to your standard brawler. One of the more entertaining features of the game falls on the “cut scenes,” which are simply shadowy still shots. What some may call lazy, as opposed to cinematic cut scenes, these still shots leave much to the player’s imagination, and I thought was a more creative and darker way to tell the story. 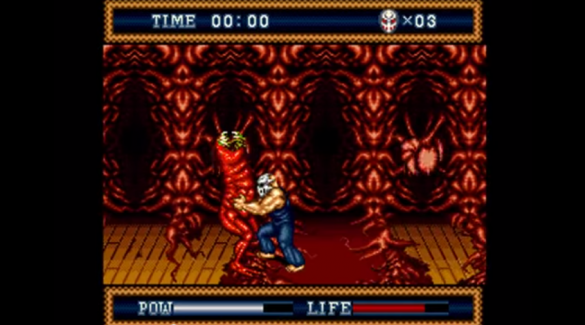 I can’t talk about Splatterhouse 3 without admitting this game was one of the first that gave me nightmares as a child. That teddy bear boss fight in the child’s bedroom was something I wanted nothing to do with, and it can go right back to Hell. I like to think that this confession can be testament to the impact the game can have. Or at least that’s what I tell myself. Having played all the games in the series outside of Wanpaku Graffiti, I can say that Splatterhouse 3 is my favorite. The game is short, but brutal, and forces you to try and try again, because it is genuinely satisfying to battle your (or maybe just my) demons with a 2×4, cinder block, or whatever else you can find laying around. I completely agree with Harry that this game is worth adding to any Genesis/Megadrive library.