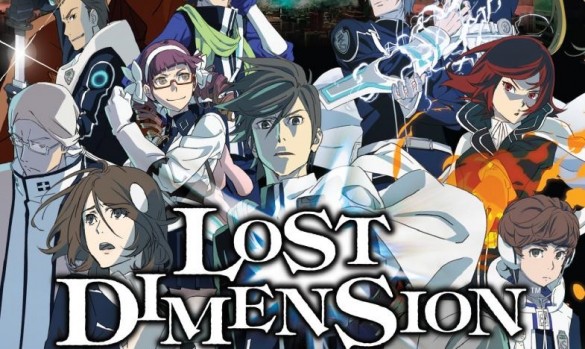 (Editor’s note: Don’t feel like reading?  Try out our new audio format for reviews, and let us do the reading!)

People are always interested in seeing something new, something different, something that’s never been done. Unfortunately, we seem to have reached a point in gaming history where it seems like just about everything has been done before, and most games are just rip-offs of other games with a different skin on them, so it’s definitely refreshing to play or experience something that doesn’t seem to fit any mold that’s been previously witnessed. Enter Lost Dimension, developed by Lancarse (Etrian Odyssey) and published for the US by Atlus.

Written by Jun Kumagai of Persona 3 live-action movie fame, Lost Dimension revolves around The End, a mysterious terrorist who has already destroyed half the world and doesn’t plan on stopping there, and Sho Kasugai, the improvised leader of a ragtag group of teenagers with various psychic gifts who are determined to stop him at all costs. Unfortunately for them, that cost turns out to be the required sacrifice of a teammate at the end of each floor in order to move forward. On top of everything, there are multiple traitors in your midst, and Sho’s the only one who can figure out their identities to keep the rest of the team safe. Against all odds, are you a bad enough dude to save what’s left of the world? 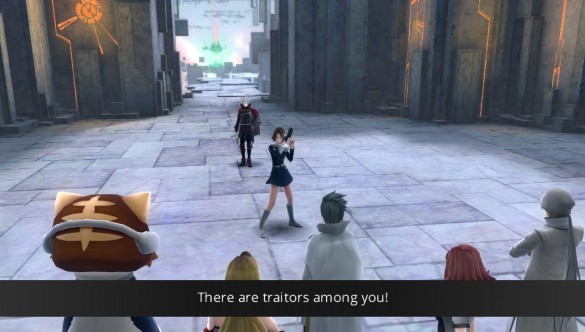 Lost Dimension boasts a rather colorful cast of 11 teammates to grow closer to (and potentially eliminate), such as ice-cold Himeno the pyrokinetic, pragmatic Sojiro the doctor, and mega-friendly Agito the teleporter. Even though some of the characters definitely rubbed me the wrong way in the beginning, now that I’ve grown closer to them all I find myself hard-pressed to name a character I actually dislike. They all have their own reasons for climbing the tower, whether it’s to save the world or just murder The End. Each has their own unique ability and the insecurities that stem from growing up with it, but they’re portrayed in ways that are more endearing than annoying overall and that make you want to genuinely learn more about them.

When a Western release was confirmed on the Playstation blog, quite a few people were upset that there would only be English voice acting, with no option for Japanese voices. I normally find myself in the same camp, and I was admittedly a bit nervous about the localization quality, but I was very pleasantly surprised at how well the voice acting turned out to be. The voices fit the characters’ personalities (even, over-the-top, justice-obsessed George’s) and convey their emotions in a way that is actually believable and relate-able, and in some cases, like Erin Fitzgerald’s performance as Nagi, restored my faith in their voice acting abilities. 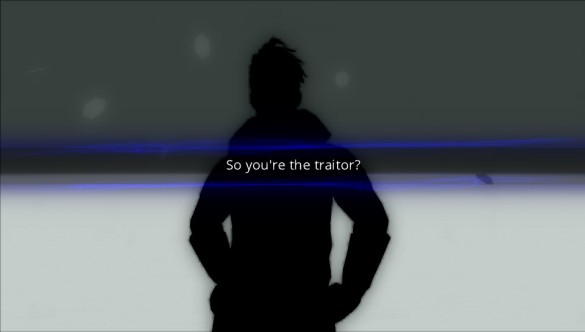 The largest draw of Lost Dimension would definitely be its traitor system, meaning that although your team is growing closer via social link-esque interactions (think Persona 3 or 4) and fighting side by side, each floor yields a new traitor in your midst as team members regain their memories. They won’t interfere in your mission or in combat as you ascend The End’s tower, but you’ll definitely regret not sniffing them out and getting rid of them. If you have any traitors that escaped Judgment in the final battle, they’ll show their true colors against you, and you’ll have to fight them. Given how utterly broken characters can get as you get closer to the endgame, it’s definitely not an experience I would recommend.

Normally I’m not on board with dubstep, but somehow this exact genre of music really tied the setting together, and I was generally quite pleased with the sound design. In sections where more talking was required than soldier-stomping, the accompanying track was quiet, relaxing, and for the most part rather pretty. However, those brief respites didn’t last long before you were either kicked in the teeth with some fresh hype for wiping out large, Metal Gear-esque mechs and their lackeys or had to deal with finding and identifying the traitor. In dealing with the traitor business, the tone of the music made the resulting tension that much more palpable, building until you reach the moment of truth in which you eliminate your suspect. 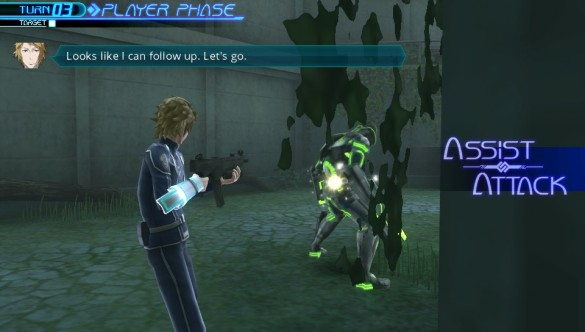 When I read that the levels were being designed by Takeshi Oga of Gravity Rush fame, I was genuinely excited to experience what sorts of locales we’d see in the game. Unfortunately, although they look nice for the most part, there’s not a lot of variation between levels in the same floor. The scenery changes drastically from floor to floor, but for the most part you’ll be looking at the same sort of battlefields for long periods at a time. The enemy designs are even worse in that they’re not at all varied, so you’ll definitely be looking at the same enemies or at the very least similar version of them as the team ascends the tower.

Battles work in a similar fashion to Valkyria Chronicles in that you move all of your characters one at a time, with each of them having a chance to attack, use skills, abilities, and items before the enemies on the field have their turn to do the same. That said, the battles have considerably lower stakes, as characters do not die permanently, and getting Sho killed also yields no adverse consequences such as the Game Over that a lot of similar games would slap players with. Healing items are fairly cheap and easy to come by, and multiple characters are capable of either healing or reviving comrades. As your team grows closer, any teammates within range of an enemy will assist in attacks, sometimes meaning that all 6 of your team members can gang up on an enemy at once and making even some tough boss characters seem like child’s play. 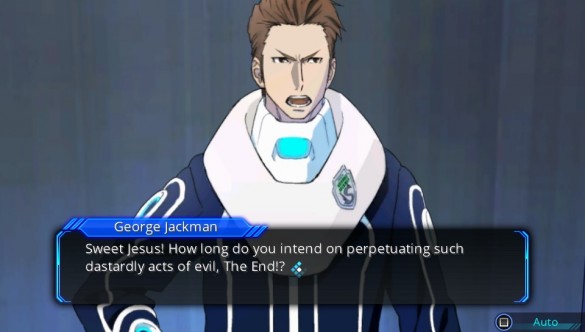 If the above didn’t make Lost Dimension sound easy enough, fear not! Through a simple process of gaining experience and leveling up, your team members quickly become outrageously strong, learning skills like hard-hitting area attacks and buffs that affect your entire team regardless of each member’s location. If that weren’t enough, numerous characters learn instant death attacks and ones that inflict status effects, but unlike most RPGs or strategy games, they actually work frequently enough to make them worth using, even on bosses. If any one character’s skills aren’t enough, you’re able to equip other previously erased characters’ entire skill sets, creating deadly movement and attack combinations as well as unlocking skills that are otherwise inaccessible.

One of the main complaints we seem to have across the board is how inefficient the equipment management system is. You’re unable to equip or sell items from the same menu as the shop, so once you’ve bought your weapons, you will have to exit the generator menu, enter the equipment menu, equip your new gear, then exit that menu and re-enter the generator menu to sell it. It’s incredibly tedious, consumes far more time than a process like switching equipment needs to, and is definitely a detriment to an otherwise simplified system. 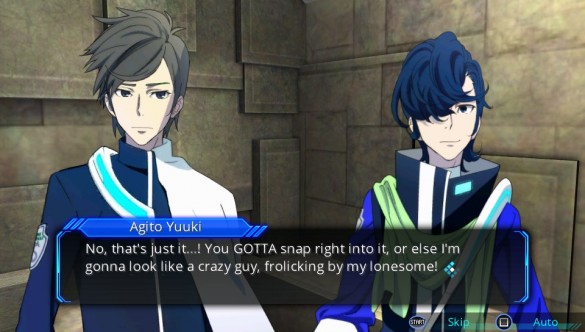 During combat, you’ll probably find yourself staring at a great deal of walls. No, really- you will, and it won’t be your fault. The automatic camera in Lost Dimension likes to follow enemies as they move and attack on the map, which in itself isn’t a bad thing, but in its pursuit of using as many different camera angles as it can manage, it doesn’t take the environment into account. What this means for an observer is that instead of watching the approaching enemies, you’re going to be spending quite a few enemy turns over the course of the game staring at the wall between the camera and the enemy.

Lost Dimension is a game that is deeply and comfortably rooted in the utterly ridiculous, whether in terms of the characters’ abilities and designs, the game’s entire premise, or, most notably, the true ending. It may not be the prettiest game on the block or the most popular, but if you’re looking for something that can only be described as truly out of the ordinary, you’d be hard-pressed to find a game with a more interesting spin on the otherwise worn-out “teenagers save the world” trope. 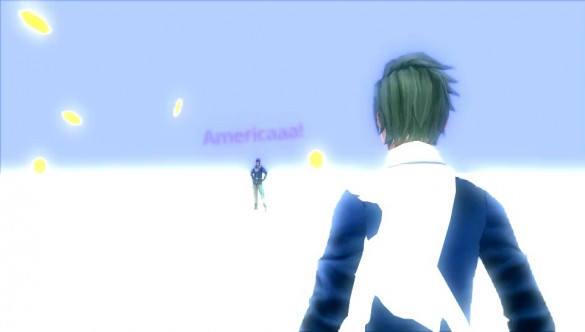