Growing up with Tetris and Dr. Robotnik’s Mean Bean Machine, I never thought I would see these two completely different puzzle games join forces. Little did I know that someday these puzzlers would not only unite, but do so in an adorable way with intense depth and strategy to boot. Puyo Puyo Tetris has combined some of the most addictive gameplay with an extensive story mode – but has all of that made for an enticing package? Put your blobs and blocks aside and allow me to educate you in a way any squirrel-bear or dog doctor would approve. 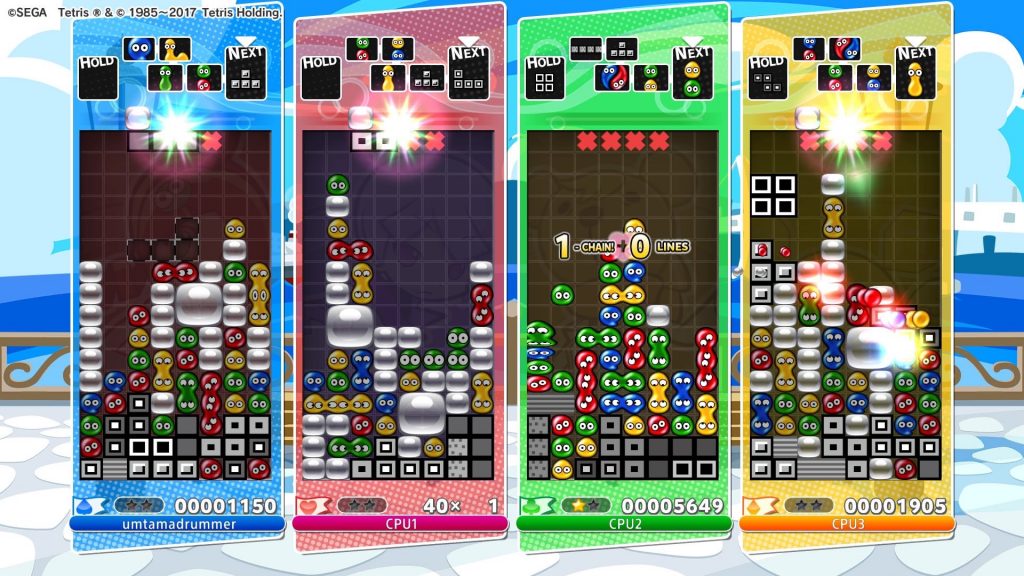 Overall, Puyo Puyo Tetris is a massive puzzle game with a plethora of modes and features. With the size of the game and the skill and strategy involved, it is no surprise that this game is featured at the Anime side of EVO this year, which is an annual competitive game tournament. I learned quickly while playing online that I have a lot of practicing to do if I ever want to join the EVO ranks.

PPT (Puyo Puyo Tetris) is split up into four different areas: Adventure, Solo Arcade, Multiplayer Arcade, and Online. Along with these areas, there is also a Lessons section to introduce newcomers and aid in those looking to improve their skills. While Lessons is a good place to refresh yourself, the best practice really comes from diving into any of the modes through Solo Arcade or Online. Each mode is playable with up to four people, and differ in the following ways:

Versus: Classic versus match. Players chose to either play Tetris or Puyos against whatever everyone else chooses.

Party: Item blocks appear and are activated by clearing lines of Tetriminos or completing Puyo chains that are touching the item blocks. The blocks are used as weapons (speed things up, impair vision, prevent rotation) or defensively by shielding against opponents’ garbage.

Fusion: Combines both Tetris and Puyo Puyo onto one board. Tetriminos fall through Puyos, destroying hard Puyo while slowly falling. As Tetriminos slowly fall they can even make for double Tetris line clears.

Swap: Play each game type for 60 seconds before the board switches. If pieces are falling when the switch occurs and a line is clear in the background, or chain is initiated, those actions can be combined with the current board in play.

Challenge: The best place to practice and improve your strategies combined with time trials, survival, and other varying goals. 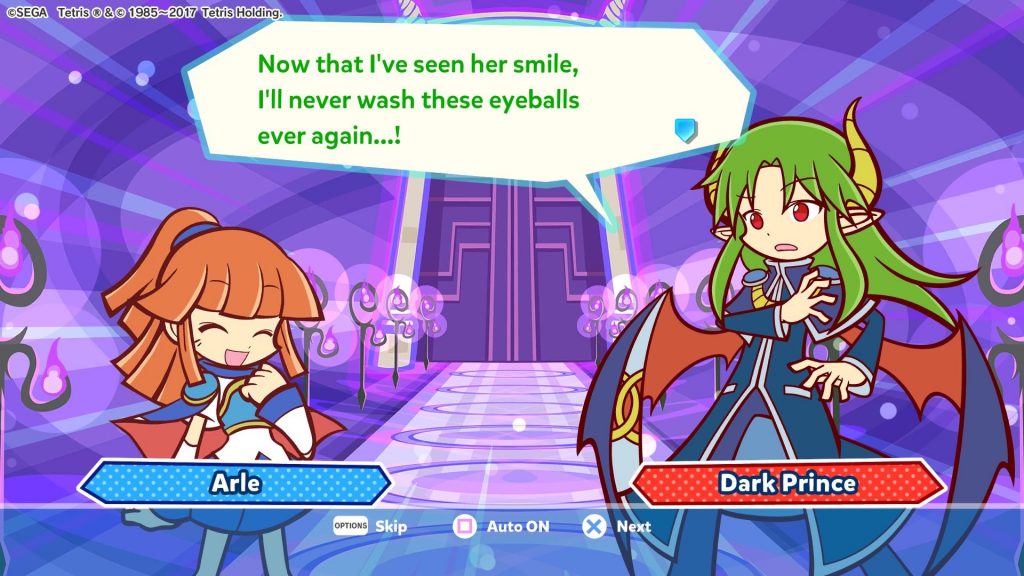 This is my second go-around with Puyo Puyo Tetris. My first round with the game involved the Japanese version, so I had no idea what was happening in the campaign cutscenes. Quite honestly, I still wish I had no idea what was happening, because now I can see just how long-winded the story became. I definitely improved my Tetris and Puyo chops before testing them a bit online, but man I never thought the campaign was going to end – and it didn’t help that I saw two sets of credits.

The different modes lend themselves very well to the campaign as the game introduces the Tetris-themed characters fighting against the Puyo Puyo universe. As with any crossover game, universes are colliding and it’s up to a ragtag team of do-gooders to make things right again. The game begins in the Puyo world and speeds right into Tetris territory with a pace that made me think the campaign was going to end quickly, but oh how wrong I was. 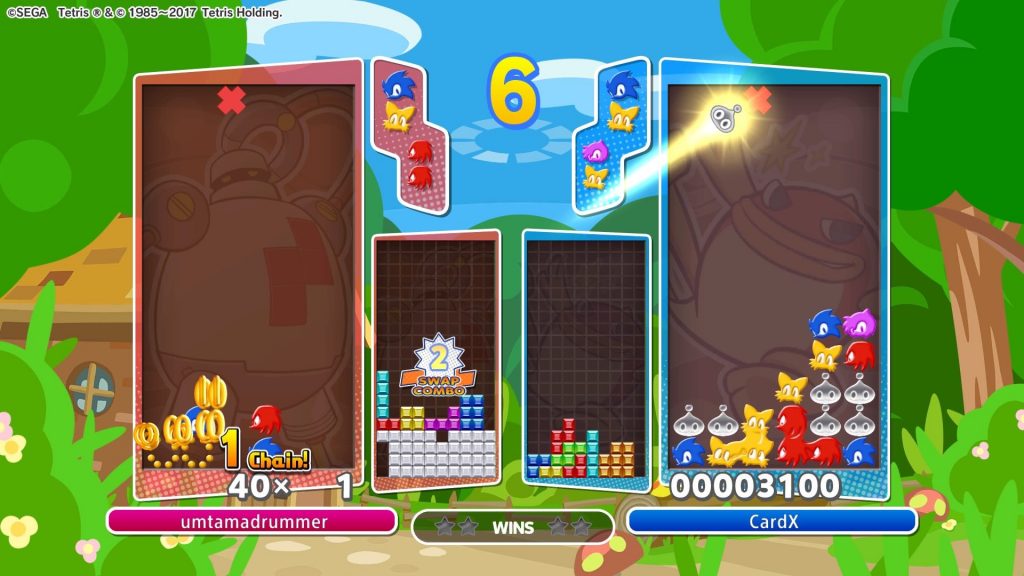 Swap and Party mode make total sense when you are pitting the different universes and their characters against each other, while Big Bang feels the closest to any type of Boss Rush mode in a puzzle game. Fusion mode makes the most sense for boss battles, but is honestly my least favorite to play. There is way more strategy involved in Fusion, but it feels much more one-sided towards the Puyo universe.

I found myself enjoying the character banter in-between battles, but gradually grew tired of a story that I had heard a thousand times over coupled with overacting and cringe-worthy jokes. I may have felt differently if the characters did not all feel like Saturday Morning cartoon leftovers, with an attempted, but brief, love story tacked on at the end.

The game takes 70 chapters (10 chapters per stage) to get through the main story, and then there are another 30 “dream” chapters for the heck of it. Needless to say, I did not get 3-stars on every chapter to get a full 100% completion rating on my run-through. 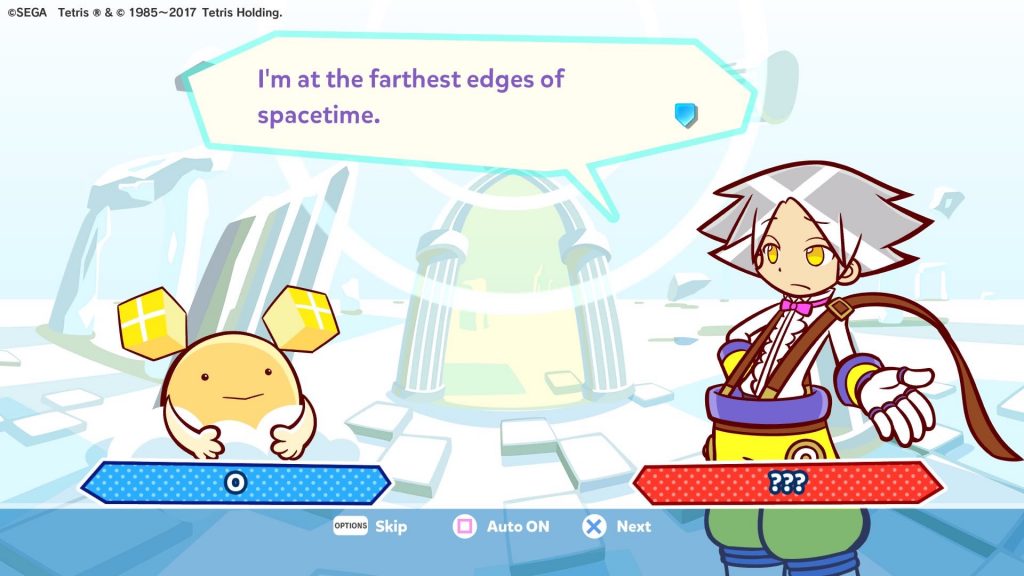 The voices for every character are tolerable, but they become annoying quickly if you cannot clear more than one line at a time. Although I will admit I love Lemres who simply yells out different pastry names as if he is censoring himself.

The length of the campaign wouldn’t be so bad if you felt like you were progressing as a puzzle player, but I only felt I would get just good enough at a certain mode to then be thrown into one of my less favorite modes. The great match types in the game are too varied to make for a good campaign. I really felt like each stage should have focused on one mode, and then sped up over time until the final level takes place at a breakneck speed. This feeling may also come from my experience with puzzle games overall as they typically follow this pattern. I will say that it was a bit relieving after each 10th chapter that the game slowed back down when introducing a new area, but it also felt repetitive. 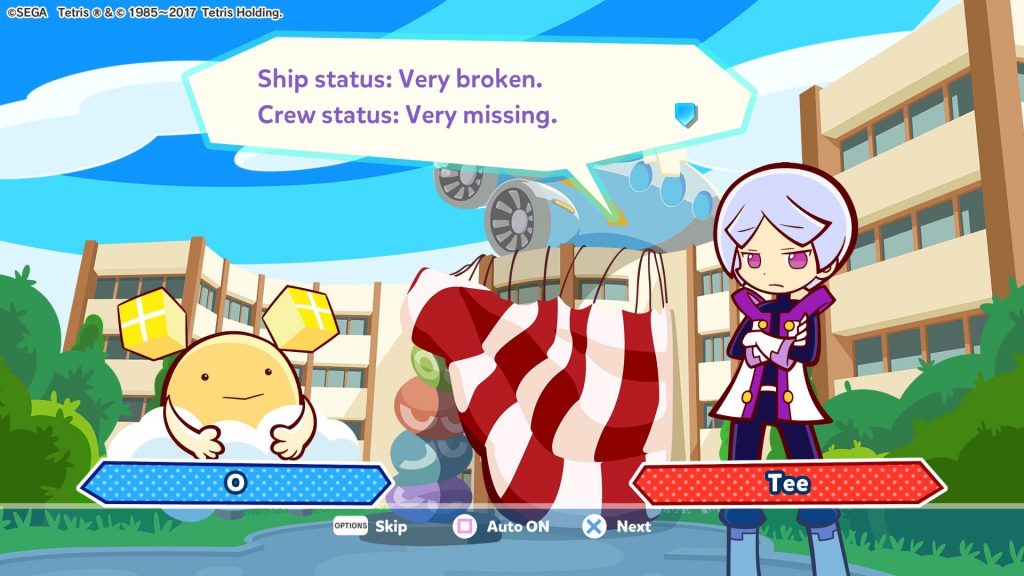 Puyo Puyo Tetris is a great party game and belongs in a living room with a couch full of people. The campaign mode felt way too long overall. I also had no incentive to unlock more characters and honestly wish I could mute the characters during gameplay. On the opposite end, unlocking Sonic-themed shapes, and other shapes made for entertaining visuals.

When playing online, no one seems to host a full room, so you will typically find yourself fighting the same individual in 1 on 1 Versus mode. The best recipe for this game is to find some friends online or in a living room. 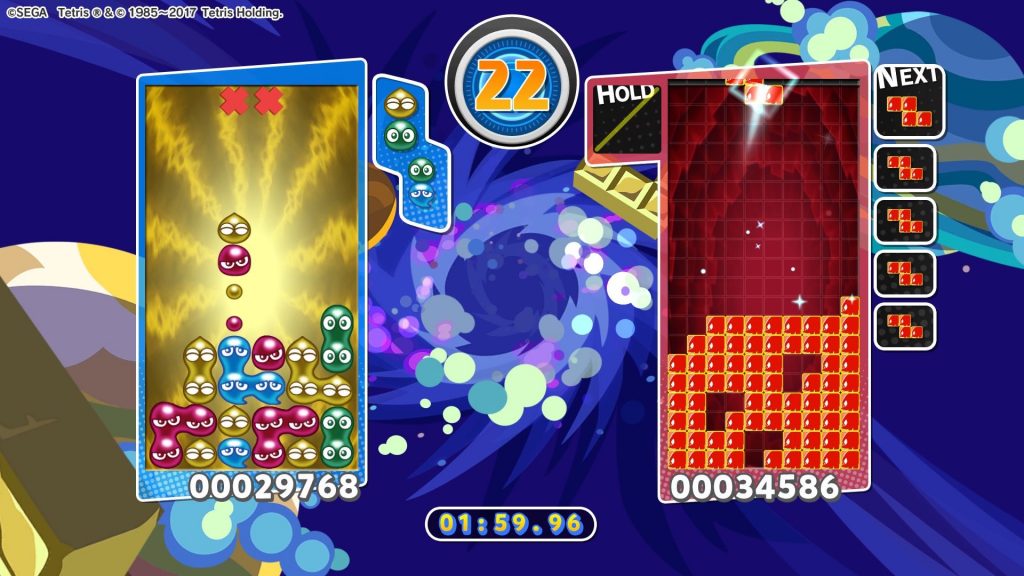 Campaign aside, PPT is a great puzzle game for newcomers to either universe and longtime fans of both or just one side. This is a game that will see some legs in my living room for years to come. PPT has a great marriage of quick matches, or addictive atmosphere that can last for hours. Even if the online mode dies down, the fact that every mode can be enjoyed by a group will keep this game in consoles for a long time.

– Puyo Puyo Tetris is better than Tetris Ultimate or Dr. Robotnik’s Mean Bean Machine, but not as good as Puyo Pop Fever or The Next Tetris

– If you get Addicted to this game, definitely check out Puyo Pop Fever

– Buy/Rent/Avoid: As it goes for only $30 on PS4 or $40 on Nintendo Switch, and even if you don’t have puzzle buddies around, this is still a hefty game for that price tag

– I may be suffering from Tetris Effect now, but I’m OK with that. 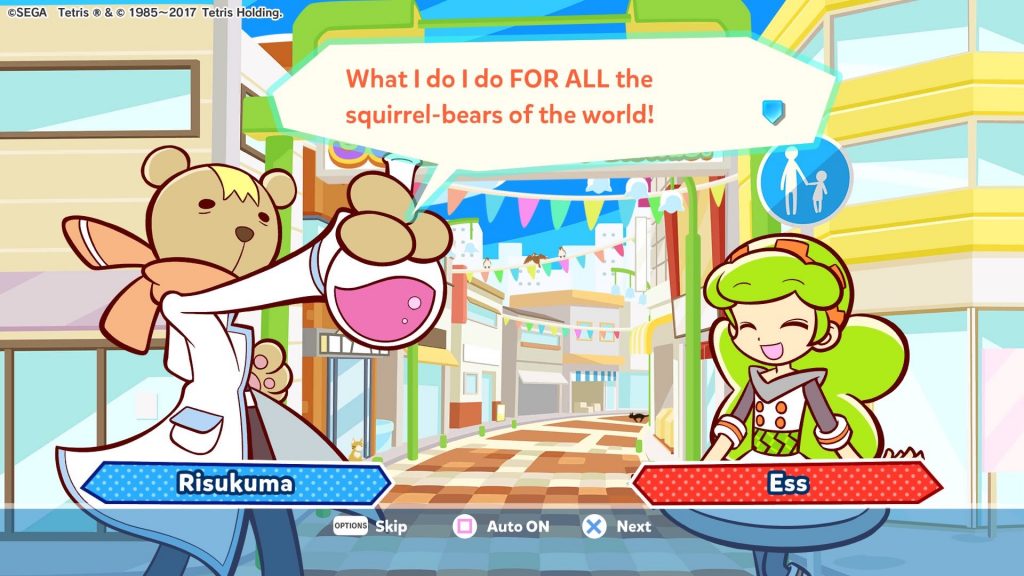