Have you ever had a great idea, but in the end your idea turned out to be a really bad one? This unfortunate scenario happened to Incredible Technologies when they decided to port their arcade game Time Killers to the Sega Genesis. This game is broken on many levels, and it seems like a rushed job (even though it took nearly 4 years to port). I could talk about that, believe me I could talk about the problems this game has for days, but that would make for a very boring feature. Instead I’m going to narrow my scope and focus on the few interesting ideas this game presents and how horribly they failed.

Intuitively the head button is not between the arm buttons.

The controls are the first disappointment players of this game will notice. The idea was to make every button control some part of a fighter’s body. Does that sound familiar? That’s because that’s essentially the control scheme of Tekken, except this game came out in arcades 2 years before Tekken. For some reason Incredible Technologies also decided no less than 5 buttons would be necessary to play Time Killers instead of the standard 4 or 6. Imagine how well that translates to a Genesis controller. Apparently it requires the 6-button controller to be played, probably because there’s no possible way to play with only 3 buttons. So if you bought this game and didn’t have a 6-button controller you’re screwed. Well, actually I guess that would be a good thing, except for the money you lost that could’ve been spent on a good game.

Once you get used to how the controls are mapped on the actual controller, the problem becomes how poorly the controls have been adapted for console play. The special move system the game has is not at all suited for playing with a controller. Here is an example of a combo: left, down-left, down, down-right, right + x + y. If you don’t hit the x-button and the y-button at the same time you hit right, or if you also hit the z-button on accident your combo isn’t going to work. Some require that you press all of the attack buttons at once, but that’s nearly impossible to do with your thumb. On top of all this the controls are somewhat sluggish and it makes it very hard to actually pull off your special move. When I played I found that I almost never tried to pull off special moves, it was easier to win by button-mashing. The developers should have changed the button inputs from the arcade version to make it more console-friendly, especially since they waited 4 years to port this to the Genesis.

This game was delayed for so long because, basically, the developers wanted to avoid being victims of the backlash going on in the early 90’s against the ultra-violent Mortal Kombat and similarly violent fighting games. That makes sense because this game shamelessly aimed to sell copies based on the fact it was bloodier than MK. At least the developers are kind of admitting this is an MK clone. The “appeal” of this game is that at any point during a fight you can cut off your opponent’s arms or head, and if you do get the head it’s an instant round victory for you. If you think that sounds cheap, that’s because it is cheap. In some matches arms were flying off like they were barely held on in the first place, others I was in the lead until my head was cut off unexpectedly. Most of the time the head thing was pretty fair, but almost every round I lost an arm or two. This mechanic could have been worked in so it didn’t feel like it was based solely on random chance. Then, they could have taken out the part where you regenerate after every round and make you or your opponent fight without an arm, or arms (decapitation would still be instant death, obviously), thus making dismemberment a significant and game-changing event. But they didn’t do that and the result is a gimmicky game. 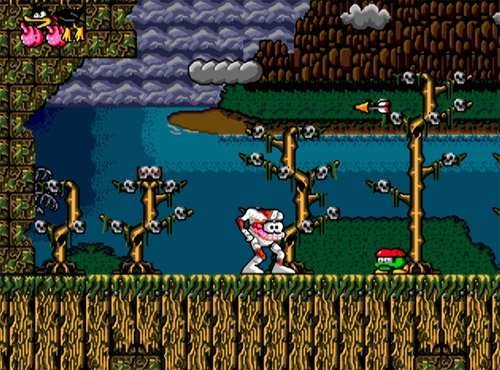 I couldn't get a screen of a decapitation, so here's Chuck D. Head.

Finally we have the story of the game. It’s slightly reminiscent of Eternal Champions: this guy, Death, gathers some of the fiercest warriors of all time to battle, because apparently they’re death’s greatest enemies, and the victor challenges Death himself to either become immortal or else Death will reclaim control of “all that is”. So only the compiling of fighters from different time periods is similar to Eternal Champions, but that’s a pretty important aspect of the games story. Much like Eternal Champions all the characters have some crazy back story that function as an accessory to the plot, and they all contain some similarity that brings them together. In this game it’s that they were powerful group fighters who overcame some mass-murdering evil entity (and that pisses Death off) and none of them are ever heard from again (because Death tricks them into fighting each other). Yeah, the story isn’t too enthralling; Death seems to be pretty easily thwarted, so even if he does win I’m not scared. This comes straight from the Time Killers’ handbook, available here: “As Plague was about to eviscerate [Rancid] with his razor-sharp spiked gauntlet, Rancid regained consciousness and kicked Plague squarely in the groin.” So that’s it, then. Aim for the groin and you’ll be fine. One pet peeve I have is that half of the fighters come from the future. The developers really couldn’t find 8 powerful warriors that existed before 1992? I guess it shows imagination on their part, but seriously? 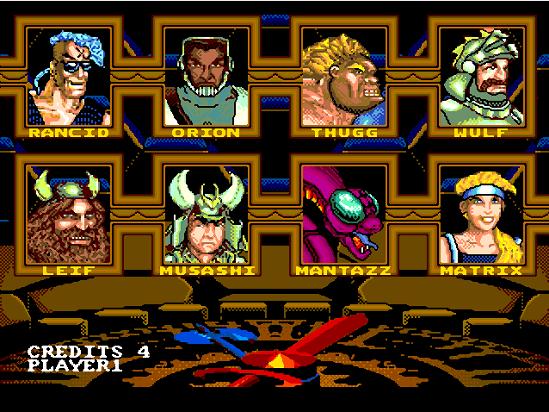 Here are your epic warriors.

Now I’m not saying this game copied Eternal Champions because that’s impossible—Eternal Champions was released after Time Killers in the arcades. What I’m saying is this game was massively outdone by another game (are you noticing a theme here?). Just like its controls, and even its violence, if it’s in Time Killers, there is another game out there that does it better. The developers probably thought that they were launching a gaming revolution, or at least that they were succeeding in some way, but their game turned out to be a disaster. In the 4 years they took to release this for the Genesis they could have done so much. There is no excuse for this game existing in the state it’s in and there really isn’t any reason anyone should ever play it.

Roll up and get ready for Sega Amusements' Milk Jug Toss

New arcade rhythm game, Maimai, may come to the West