DO NOT READ THIS ARTICLE UNTIL YOU’VE WATCHED THIS VIDEO.

OK.  Sorry about that.  I didn’t want to coerce you into watching one of the most startling videogame intros in Sega history, but when I decided that the Genesis X-Men would be the focus of this week’s article, I knew that there was no other way to introduce it than with the earsplitting, bowel-loosening chord with which the developers chose to assault their players upon first booting up the game.  It’s as if Western Technologies were grabbing us by the shoulders and screaming, “THIS IS SERIOUS SHIT, MAN!”  Several years later, grownup gamers are now stricken with waves of unexplained post traumatic stress, brought on by the game’s declaration that it does not fuck around.  For anyone who’s been privy to X-Men’s charms, that statement is unequivocally true. 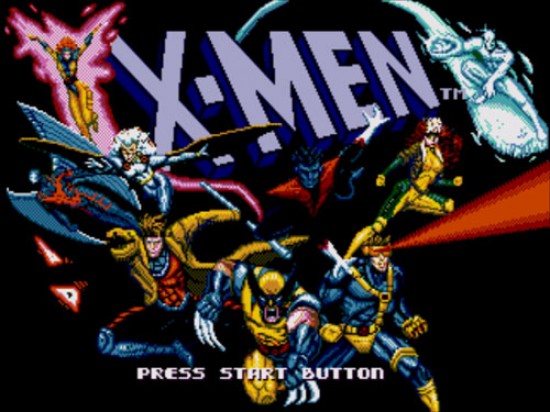 Developed by Western Technologies and published by Sega in 1993, X-Men drops you in the shoes of four of the most famous members of Professor Xavier’s school of mutants – Wolverine, Cyclops, Gambit and Nightcrawler– in an action platformer that spans eight stages of staple environments of the series.  The game supports 2 player co-op, as well as the ability to switch characters on the fly.

The game’s lean but surprisingly interesting story is not based on any particular comic book arc, but this lack of narrative roots doesn’t hurt the experience at all.  Instead, it allows for a completely fresh, simple, game-friendly storyline whose secrets are gradually revealed as the game progresses.  Your character starts off in Xavier’s training facility, which is basically an overarching “safe room” that serves as a neutral area in between each stage.  Each scenario takes you out of this safe room and thrusts you into one of many classic X-Men environments, from the Savage Lands to Mojo’s technophilic lair.  At first, your character assumes that these simulations are part of the ordinary routine, but as the danger and difficulty of these challenges increases, it becomes apparent that Professor Xavier is not putting you through the wringer; rather a malevolent force has hijacked the system and is trying to put an end to you and your X-Men brethren.  The name of that force?  Magneto, of course.  By revealing these details to the player bit by bit, the game actually does a decent job of pulling you along and keeping you interested, even as the insane difficulty and occasionally frustrating play mechanics threaten to ruin the experience.

Some of the best story moments of the game manage to set it apart as something very unique, especially back in the days when post-modernism or self-reference just wasn’t all that present in games of the time.  Sure, these ideas weren’t executed all that well, but the thought behind them was so original that they ended up sticking in the minds of gamers for years to come.  The most infamous of these moments comes at the end of Mojo’s Crunch.  Once you’ve managed to kill that laughing bastard, you are prompted to “reset the computer” in order to prevent a virus from being uploaded.  This is where you sit and stare at your TV in frantic confusion as a counter ticks away in front of you.  What the hell?  What…Where’s….RESET WHAT?!  You hang your head in despair, just about defeated from the relentless trials this game has thrown at you.  Then you notice the little red light of your Genesis.  Next to it, a pill shaped button emblazoned with that word:  “Reset.”  Hesitating ever so slightly, you reach forward and gingerly push the button.  When you release, the screen goes black…  Then, you see the words, “Produced by or under license from Sega Enterprise, Ltd.”

You have reset the entire game.  Apparently, you’ve held the reset button for too long.

Yeah, this was the cause of frustration for so many people back in the day, but I remain a huge supporter of it.  When Psycho Mantis forced you to change your controller ports to prevent mind control in Metal Gear Solid, the game was celebrated by critics as being a bastion of self-reference and ingenious originality.  Well, to those people I submit X-Men for the Genesis.  Sure, it came with the risk of losing your game, but forcing you to play by actually screwing with your console added a whole new level of immersion to gaming.  Take that, Kojima. 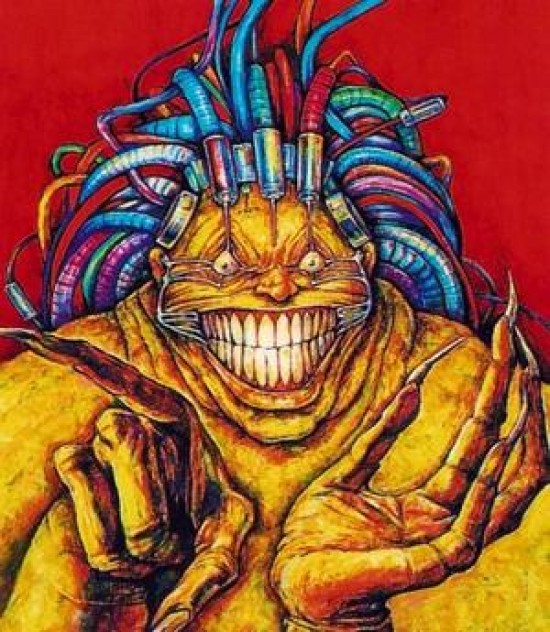 But this is not to say that X-Men for the Genesis is flawless.  Not by any means.

When I was a kid, I wouldn’t allow myself to dislike anything about this game.  Nightcrawler was my jam, and any game that allowed me to play as him deserved my love and devotion, no questions asked.  Even as I played through the first two levels over and over again, unable to progress because of unfair game design, I remained blinded by my love for the characters I was seeing onscreen.  Nightcrawler was in the game, goddamn it, and that’s all that mattered.  Now that I pick it up again, I find it a hell of a lot easier to flip off my TV for the most glaring flaws that refuse to go away.   Every time I miss a platform because of Nightcrawler’s agonizingly janky teleporting mechanic, or every time I spend minutes at a time jumping over an impenetrable Juggernaut, waiting for him to kill himself, I have to ask myself why I was so in love with this game in the first place.  Perhaps the most frustrating amongst these problems is the game’s complete lack of checkpoints.  This drives the already unforgiving difficulty through the roof, a flaw seen all too often in early Genesis/Master System titles.

Another weakness that pulls the experience down further is the agonizingly boring sound design. The sounds of punches and character deaths carry all the audio oomph that comes with flicking a sheet of paper.   Dying enemies disappear with little audible fanfare.  Even jumping and landing sounds painfully drab and repetitive.  It’s odd that a game based on a comic book, a medium so known for its embellished sound effects, is so lacking in audio flavor.   I will grant that this was an early title, so the issues with Sega’s lesser sound chip make the blandness a bit more acceptable.  The music is much more passable, at times approaching catchy in its loud, techno-rock style.  The very best of this stuff comes at the title and intro screens, utilizing a simulated guitar sound that reminds me very much of the classic theme from the awesome mid-nineties cartoon. 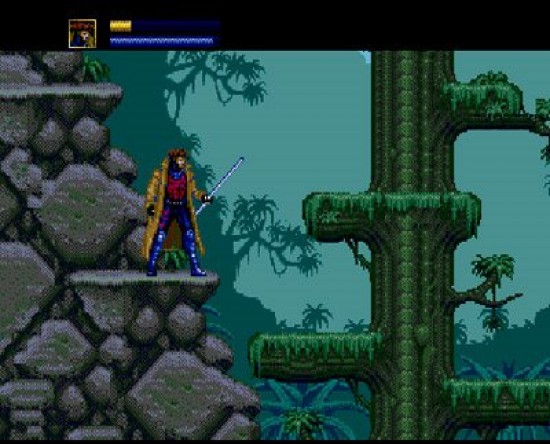 Gambit in Legend of the Hidden Temple

Even with the aforementioned flaws dragging at every corner of the X-Men experience, there are still a handful of gameplay elements that help to save it from completely drowning in its mediocrity.  One is the innovative character switching system.  Being able to switch between Gambit, Nightcrawler, Wolverine and Cyclops on the fly is incredibly fun, and allows for some creativity in how the player chooses to play the game.  Even with the somewhat minimal diversity between the characters’ fighting style, it feels rather satisfying switching back and forth to utilize certain abilities to maximize your chances of completing a level.  The mutant power meter serves as an effective tool to moderate the switching mechanic, as the depleting power forces you to conserve your energy, and to consider just what character should go out into the fray next.

Another very satisfying element of the game is its dedication the X-Men series.  Marvel is known for having a bevy of interesting secondary characters, and this game has many of them occasionally stepping in to save your character with screen-crossing assist moves.  While not as clever or obscure as the ones found in Maximum Carnage, these assists are extremely useful in a game as unforgiving as this one.  Angel, Storm, Jean Grey, Rogue, and Iceman all come to the rescue, providing a little extra fan service and momentarily pulling the player out of the depths of the game’s relentless difficulty. 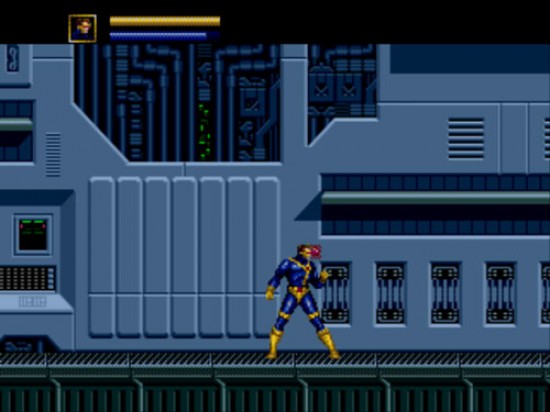 You might be surprised to hear that I still adore this game.  Sure, this might be because of my diehard pair of retrogoggles, but that shouldn’t stop anyone from giving it a try.  Despite the frustrating difficulty and iffy game mechanics, it somehow remains fun and creative enough to keep me interested throughout just about the entire experience.  I will warn you that fans of the comics are much more likely to fight their way through the pain, as the game offers enough classic series environments, situations, and characters to make any X-Men fanboy clamor into their X-Men footies and grab a controller.    Just make sure that you play it with a friend at your side, or the level select code in hand, because playing through by yourself is a chore.

So really, this one is fit for the spandex, but only if you plan to play crosslegged on the floor in your X-Men footie pajamas.  Or if you like Nightcrawler.  Cause he’s the shit.