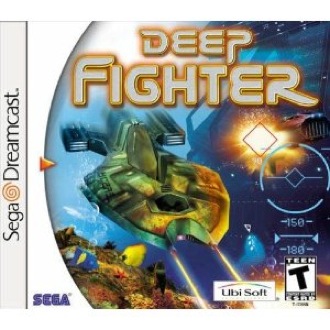 Imagine Ecco the Dolphin, the calmness of the water, the fun of swimming, the caverns to explore.  Now transplant Ecco into a 3D world and replace him with a submarine filled to the brim with weapons and gadgets.  Sounds like Ecco the Dolphin just got awesome.  Deep Fighter, released for the Dreamcast by Ubisoft in 2000, is an action packed, and at times relaxing, wade through a sea of stunning graphics and fun game play that adds to the Sega Addicts’ unofficial week of water.

You are thrust into the role of Moray-2, a new submarine pilot graduate fresh from the Academy.  You are assigned to the Moray division for patrolling and general underwater tasks.  As you work you way up the ladder, your duties will become more rewarding and more challenging.  Each mission is better than the last and all have an exclusive style.  They take time with the story and the effort pays off as you believe even the more ludicrous twists later on.  And the best part is that the story gives ample reasons to go cruising around in submarines. 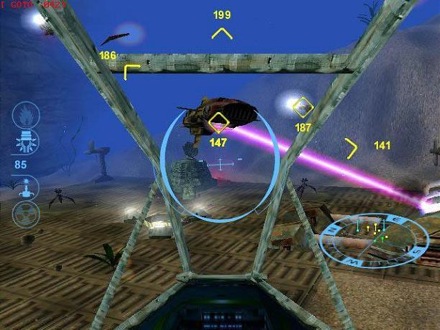 Controlling the submarine is mostly a joy.  Piloting through the water can be relaxing, especially in between missions when all you have to do is go from point A to point B.  Velocity and speed can be felt as you glide over underwater mountains and through caverns.  When only water is in view, there is a calm serenity felt, even as you travel to blow up enemy fighters.  Sometimes though, piloting the ship can become the most frustrating aspect of the game.

You’ll press forward, but it will tilt sideways and drift and often pin you against walls.  Your ship can swing wildly back and forth.  This may be the work of tides or some sort of water mechanics, but there is no explanation for why you submarine suddenly become inoperable.  This especially hinders towing missions were you are thrust into a third person view and your aiming reticle is rendered useless.  When “Attack Position”is engaged, you are only able to move along the x and y axes, which is useless in the fight against a giant mosquito.  Overall, the ships control fine but could have used a little more TLC in a few brief areas of the game.  Each submarine you unlock handles differently as well. 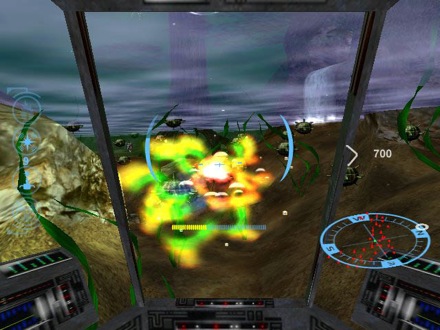 New submarines can be unlocked as you progress.  Each has unique controls, powers and statistics.  Some subs can travel great depths, others have better defense, one has boosting ability for speed, another is stealth, and one can even walk on land.  Each submarine’s distinctive handling makes for a varied play experience with each ship being used to reach new areas and handle certain missions.

Missions are a sundry of styles with lots of thought put into keeping things fresh and fun.  Even the ways missions are presented are different.  Collection, escort, exploration, boss battles, rescue, you won’t repeat a type of mission.   Maybe you do, but either new areas or having fun distracted me from I recognizing any receptiveness.  My favorite was when the English Admiral gave me a secret mission to destroy a jellyfish nest.  It felt wrong to kill these jellyfish, but the Admiral stressed how it would keep our people safe.  On my way to the nest I passed a cargo ship and did my best to avoid it lest it find out my duty.  The morality of the game became very murky then, and immensely fascinating.  Once I passed through a narrow cave and into their amber world.  I destroyed the jellyfish hive.  This only caused a huge cavern to open into the main area and the mining machinery was swarmed with the acidic jellyfish, thus making the previous pest a much greater threat.  I was left stunned as they ravaged our oil drill and pestered other fish. 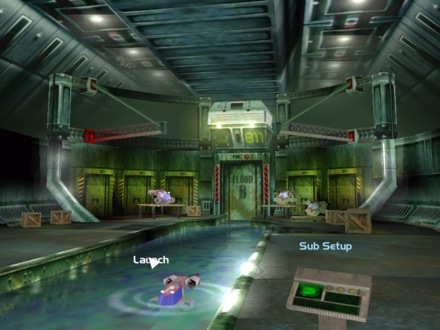 The graphics are gorgeous, simply put.  The aquatic environment lends itself beautifully to the Dreamcast.  When buildings and formations fade in from the background, you believe it’s from the murky and dark water.  As you reverse in your ship, bubbles and ripples fill the screen.  The details filling the areas make it feel like a living, gill-breathing world.  Crabs, spiders, jellyfish, and several varieties of fish, including the dreaded sharp-tooth fish, are only a few of the aqua inhabitants (listing any more treads into spoiler territory).  Nature is balanced with industrial equipment.  Mountains tower over your home base as the skeleton of a new mothership is being built, giant trees shadow waterfalls, Electric eels light up sunken hallways in a massive submarine, and oil spewing mining equipment blackens the sea (This game predicted the BP spill, I’ll say it).  Even the Full Motion Video looks good compared to most.

Hands down the best part of the game is the Full Motion Video with real actors!  What must be said first is that the Admiral is a very good actor (or maybe his thick English accent covers it).  Unfortunately, the rest of the cast doesn’t quite have the Admiral’s talent, the worst ones being the people who do not speak but sit like bored lumps.  If I were the director of these segments, I would have had a field day.  The scene in question is the Admiral describing new baby mines and how they blow up acidic jellyfish very well.  My direction: “Cut.  Admiral great job, you make those baby mines sound like real whoppers and fun as heck!  Razz, you don’t need to mug so much, but I like your energy.  As for the rest of you, look like you care!  You’re Deep Fighters!  Your Admiral is telling you about a new weapon that will make your jobs a lot easier and a lot more fun!  Now I wanna see some passion behind those eyes!  Let’s go again!” 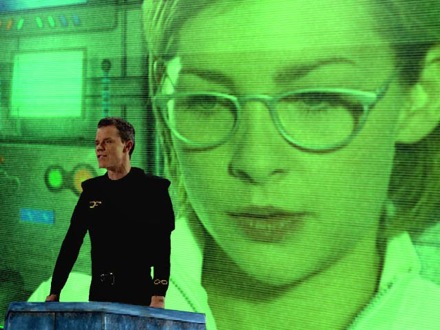 One cool touch is whenever the Admiral receives an incoming message, he puts his hand to his ear and a headset appears from thin air, giving the setting an air of highly advanced technology.  This effect is achieved in a similar technique to how bras are added to the film Showgirls when shown on VH1: painted onto the screen.   But unlike Showgirls, the effect comes off slick and barely noticeable (whereas in Showgirls on VH1 it’s totally noticeable and, “Amazing” -Chad Concelmo).  One odd touch is that everyone prays to a god named Kee, as in “Thank Kee” and “Kee must be with me today!”  It is unsettling that games add new god for there characters to worship.  Maybe it’s to add to the mythos of their universe.  Or maybe it’s to avoid controversy by avoiding their characters from having to say God.  But it isn’t like this is a church simulation.  The characters don’t have to reference God, its more used to pepper dialogue.  This is a small detail but one that irked me every time I heard it.   Luckily, Deep Fighter as a whole is not galling, but very enjoyable.

Deep Fighter is a fun game with an open world, mission based structure in an underwater habitat that’s an ideal setting for the Dreamcast.  The variety of submarines and missions will have you smiling during the entirety of your experience.

Deep Fighter goes deep into our hearts and earns an A-

The Dreamcast Marathon 7 AM (Pacific) update