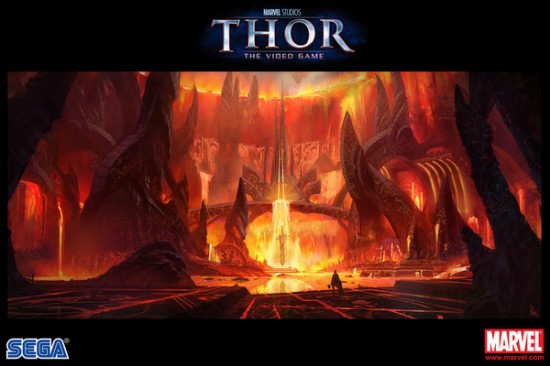 I’d give my left leg to reside in San Diego right now.  This year’s Comic-Con looks like it was one hell of a blow-out, with awesome developments for movies like Green Lantern and Don’t Be Afraid of the Dark, games like Marvel Vs Capcom 3 and Street Fighter x Tekken (or Tekken x Street Fighter, whichever you prefer), and of course, the opportunity to get my hands on those new Sonic toys.  Damn I hate my East Coast right now.  Boston, what the hell?

Well here’s yet another intriguing development that popped up on the convention floor.  Sega revealed a teaser trailer for their upcoming Thor game, along with a couple very tantalizing pieces of concept art.   The teaser is just what you’d expect:  Epic words spoken by a gravelly announcer and engraved on a hammer, then an image of The Son of Asgard looking out across a massive, craterous landscape. The end.  It looks like they’re getting the scope right, at least.

The concept art is much more telling.   These included several detailed illustrations of a game environments like Thor’s homeland of Asgard, the molten kingdom of Muspelheim, the frozen land of Niflheim, and the lush Vanaheim.  There were also a couple very cool looking creature designs, including one of Surtur, ruler of Muspelheim.

I know that concept art is one of the hardest pieces of evidence on which to judge the future of a game, but I gotta say these things are pretty promising.  The size of these environments looks staggering, and some of the design choices look very appropriate.  Only time will tell how well this actually transfers to the game.  We all know that concept art is never the best indicator of the final product.  God I hope it’s is playable. Shut up, I can dream, can’t I?

Comics Alliance has an expansive gallery of this new Thor game trailer and art.  Check it out. 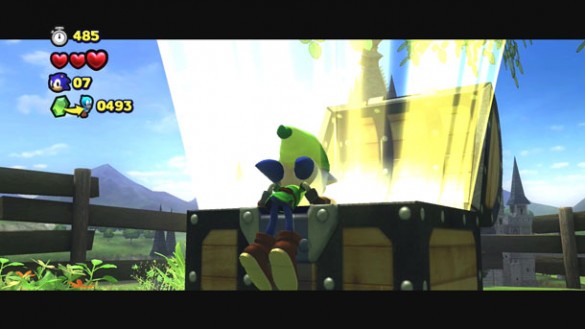