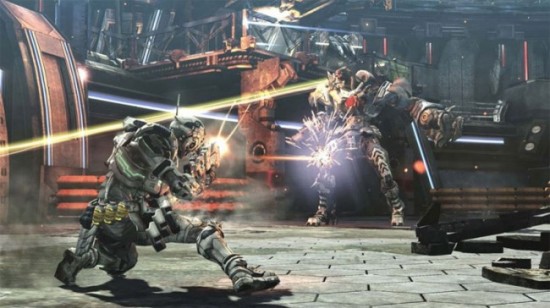 As you’d expect from any fast-paced shooter of the same breed, Vanquish will provide both “Casual Automatic” and an unlockable “God Hard” difficulty modes to sate the appetites of the less experienced and the pro gamers respectively.

Though I’m sure most of us would shrug it off, project director Shinji Mikami does his best to make the Casual Automatic Mode sound kind of interesting,

Before we started work on it, I can’t say that I had high hopes; however, once we got it up and running, I was pleasantly surprised to see that I was wrong. Once you get your target on the enemy, the rest is easy as pie. I’m sure saying it that way makes it sound totally uninteresting, but when you actually give it a shot, the tempo it gives the game play will make you jump up and say, ‘Woohoo!’

I love how they use “Automatic” to describe a lot of casual difficulty modes lately.  It’s like the game is basically telling the player to put down the controller and let it take care of itself.  From the sound of it, though, Mikami’s take on this could mean a more arcadey, pick-up-and-play experience. Let’s just hope the cheering that he’s talking about won’t be akin to “woohooing” while watching an exciting, non-interactive television show.

Vanquish looks better than any action film this year