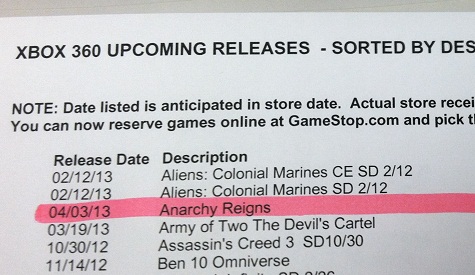 News just in from our under cover Sega Addicts agent Scott Morrison: According to official GameStop documentation, Anarchy Reigns will be available for pre-order with a release date of April 3rd 2013, as shown in the professionally taken image above.

The international version of the brawler by Platinum Games was originally set for release in Western territories this year, later being pushed back to ‘Q1 2013? by Sega themselves.

Where have GameStop gotten this information? We don’t know. Is the release date set in stone? Probably not. Anarchy Reign for only $30?! I know rite!

We’ll keep you updated with any further information as we get it. Be sure to hit the jump for a sexy high resolution image of the bit of GameStop paper. Cheers to Mr. Morrison for the intel.