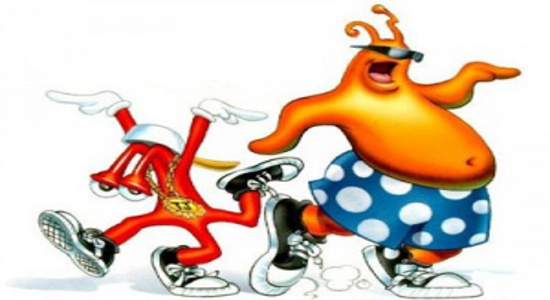 Whimsical and challenging rarely go hand in hand because realistically, they sit on opposite polar ends of how things are crafted in this medium. For instance, Modern Warfare 2 and Bioshock, both possessing their own capriciousness are oft seen as simply shooters as opposed to what their narratives possess. Modern Warfare 2 played on ‘Easy’ is equivocal to watching Die Hard, The A-Team or any other summer blockbuster while Bioshock on a similar difficulty allows for the appreciation of the Art Deco aesthetic that permeates throughout the course of the experience. However, when played on their highest difficulty, the quirky atmospheres take a backseat to the challenges facing the player. Often there is very little balance to this, but when executed properly, the game has the capacity to become a classic. 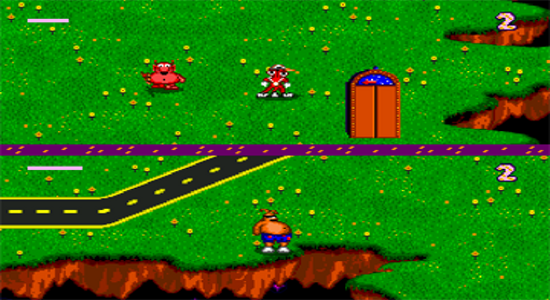 So is the case with Toejam and Earl, which originally appeared on the Sega Genesis and subsequently became a testament to the era in which the console inhabited. Sitting down with the game today allows players to hearken back to a time when original ideas more often than not were in surplus to the technology needed to bring them to life. Looking at the sheer ridiculousness of the mechanics, enemies, environment and narrative, this becomes all too clear. Before the ‘Start’ button is even pressed, the wickedly humorous narrative comes to light in the form of the opening cartoon.

Rendered in 16-bit graphics, it’s almost odd to remember that this was the best graphics available on the console at the time, but nevertheless it accomplishes the goal beyond a shadow of a doubt. Two aliens, one stocky, three-legged, backwards hat wearing and red-skinned while another is taller, portly and wears nothing but shades, sneakers and shorts – Toejam and Earl expressed qualities that fell somewhere between Marky Mark and Big E. When placed next to the major characters of the day – Mario and Sonic – without a doubt, they weren’t what gamers usually saw. Crashing on Earth, they’re marooned until they can find the pieces of their ship; reassemble it and escape back home to Funkatron.

Seriously, if this entire story doesn’t strike you as cool, there has to be something wrong.

Starting on a small island, players assume the role of one of the two aliens as they begin their search for the pieces to their ship. Taking a top-down perspective of a 2D world, it never feels clunky or wrong to the player, but it definitely has elements of a dungeon-crawling game intermeshed with early 1990s California slang. While each level is randomly generated each time you play in addition to the locale of the various ship pieces, this consistently offers not only a challenge but a vast amount of variety when placed next to more linear games that appeared in the same era.

Additionally, the game’s satirical take on the various personalities resident to Earth not only has a vicious edge to it, but is actually pretty hilarious and spot on more often than not. There’s a mad dentist with a drill who pursues players and bellows out a grim cackle with each attack, Ice Cream trucks that haphazardly terrorize the levels and mother’s haphazardly pushing shopping carts among other various characters. But, it’s the overall personality that is embodied in the game that gives it an overall laudable quality combined with the potential for a new enjoyably difficult challenge with each playthrough.

Still, to this game both Toejam & Earl are cult successes, despite Sega’s belief that the series has proven to be a commercial failure. Nevertheless, the game is fun and will definitely ask you to put up or shut up with items like angel wings, tomatoes and of course, the ever beloved rocket skates, which were always dangerous given the players propensity to fall off a level, landing on the previous one. However, just hopping the next elevator would make things right.

But for all the problems I usually have with many of the games I write in this feature, my only one with Toejam and Earl really is the difficulty. The fact that you can make it to the very last level and the game will suddenly decide to go from relatively normal to rape and pillage in less than ten seconds. But thankfully, the game has enough whimsicality about it to keep players coming back. And usually, they’ll bring a friend – because getting off this strange little planet wouldn’t be fun if you always had to do it alone.