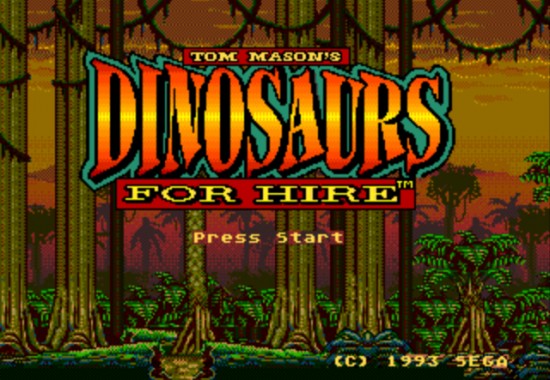 I dare you to consider those phrases without getting a boner.  Like the chocolate and peanut butter, these two elements of totally awesome just sound like they’re made for each other.  So how the hell did I manage to avoid Tom Mason’s Dinosaurs for Hire when I was a kid?  I spent most of my childhood obsessed with anthropomorphized animal superheroes, from the good (Teenage Mutant Ninja Turtles) to the bad (Street Sharks) to the WTF (Biker Mice from Mars).  What’s more, I spent years convinced that I wanted to grow up to be a paleontologist, just like my hero, Alan Grant.  Really, I just wanted to threaten some fat kid with a raptor claw, feigning that I was spilling his intestines after he said my favorite dinosaur looked like a 6-foot turkey.  But I digress.  It simply wasn’t right that I had never given this game a shot before, and so as penance, I have decided to make it this week’s superhero feature.  Yes, this counts. 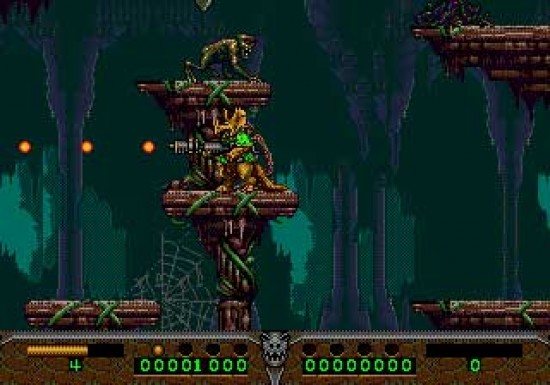 Based on a comic book of the same name, Dinosaurs for Hire has you and a friend choosing between three man-dinos (a leather jacket-wearing T-Rex, a dignified, Hawaiian-shirt loving Triceratops, and an eye-patch-sporting wild card Stegosaurus), in your quest across stage after turret-filled stage of standard shoot-em-up gameplay.  You only have one gun and one melee attack, but in classic shooter fashion, you can pick up power-ups to increase the size of your blast, as well as the number of bullet streams your gun is churning out.  At the end of each level, you face a boss, which is more often than not some type of poorly-animated mechanical animal, my favorite being a giant Minotaur that hangs off of a skyscraper, King Kong style.

So yeah, Dinosaurs For Hire’s gunning/platforming gameplay is pretty generic.  While playing through the first couple stages, I was bombarded with flashbacks of Contra and a thousand knockoffs that utilize the same exact play mechanics.  Luckily, it’s always a bit of mindless fun to run from point A to point B, laying on the shoot button, clearing the stage of enemies with your massive gun, so even the most bland and repetitive of shooters can still provide their little burst of entertainment.  And, honestly, there’s nothing quite like being an 8-foot Stegosaurus mowing down scores of people with your gigantic blaster and your massive, armored tail.

The onset of repetition is also staved off by the game’s painfully corny sense of humor.   When you first choose your character, you are treated to a scrolling bio that describes his attitude, dress style, his favorite book, movie, favorite quotations, etc etc.  Some highlights include Jurassic Park as Archie’s most recent read, “Terminator III (he’s hoping)” as one of Reese’s favorite movies, and “Air Dinos” as Lorenzo’s favorite shoe.  Sheer TMNT-aping hilarity.  Once you get over the blasphemy that is herbivores listing cheeseburgers as their favorite food, you select your character and start the game.

DFH’s very first moments provide another instance of gut-busting (read: painfully unfunny) humor.  The game opens on a massive lizard scaling the Hoover Dam.   At the very top, he runs into you and your gun, and a small, incredibly easy battle ensues.  Once you’ve managed to defeat the creature, a new bit of music plays while the credits start to roll.  Just as you start to think, “that’s it?” the credits stop and rewind off the screen, and a pterodactyl floats on to inform you, “Whoa!  Slight problem with your Genesis’ Blast Processing Unit!  Psych!!  Anyways, the REAL game starts here.  Good luck!  You’ll need it…” At this point, you are rolling on the floor, shaking in fits of laughter, absolutely stunned by the postmodern genius of this game. Sarcasm aside, I do really dig that they actually mentioned Blast Processing by name.  I always love it when an in-game reference helps to define a title as distinctly Sega.  I just wish the joke sucked a little less ass.

Once you start to dig into the REAL game, you’ll discover that the level design is a tad less generic than the gameplay itself.  You’ll be doing a ton of vertical platforming to get to your destination, and sometimes the setups they throw at you can prove surprisingly varied and extremely challenging.  While DFH’s difficulty doesn’t reach the levels that so many other Sega classics use to drown their players, it certainly knows how to make you earn your victory.  Levels are filled to the brim with respawning enemies, turrets from all angles, and stage-based hazards that are bound to repeatedly catch you off-guard.  This is all made even more aggravating by a handful of classic 16-bit shooter clichés, the first of which being a complete lack of checkpoints.  This doesn’t really matter in the shorter early stages, but as you get deeper and deeper, the length you have to repeatedly travel becomes more and more noticeable, especially in the stages where your ultimate goal is to platform your way to the very top of the environment.  If that wasn’t enough to drive you crazy, falling from too great a height results in an instant death, so you will be dying and restarting quite a bit.

The clichés don’t stop at level design either.  The environments are all the same tropes you’ve seen a million times before in other Genesis run-and-gun games.  The obligatory sewer stage, train roof stage, skyscraper stage, and factory stage are all present, and none of them are executed particularly well.  As you might expect, this half-assed attention to detail also extends to the game’s lack of narrative progression.  There’s never even an attempt to explain how your dino managed to travel from a skyscraper to Hollywood to Japan in his shooting rampage.   That intrusive pterodactyl manages to use his irritating quips to loosely tie stages together, but there’s really no other story to speak of.  This isn’t really something you’d tend to hold against a mindless shooter like this one, but I do hold it against a game based on a lesser-known comic book franchise.  This was an opportunity to expand the series’ fanbase, and some form of narrative could at least have garnered some future interest in the characters.

Despite all of its flaws and complete lack of originality, I’d still say that I enjoyed my brief experience with Dinosaurs for Hire.  The old “hold down A and run” type of gameplay is not without its satisfying moments, even if that satisfaction is accomplished with your brain completely switched off.  The game’s substantial platforming helps to keep things fresh and challenging, and the feeling of running around as an undersized T-Rex with a gun will never lose it’s appeal.  It’s just a shame that so much of that concept’s potential was wasted on underwhelming bosses, standard shooting gameplay, and some cheap 16-bit gameplay mechanics.