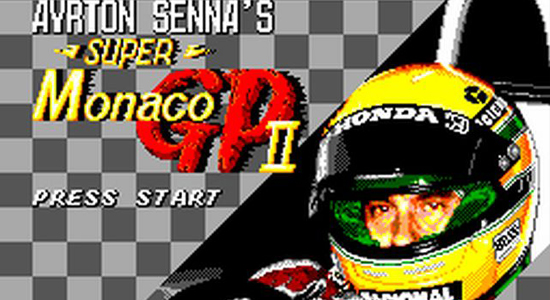 I’m baaaaaaaa~aaaaaaack! Did ya miss me? Actually, no, don’t answer that. My heart can’t bear the resounding “NOOOOOOOOOOO!”.

Anyways, good little trip I had for those wondering, aside from not being able to sleep, and it being terribly overcrowded there. Managed to play a bit of Hydro Thunder (still having a love affair with it) and another game I plan on featuring in the very near future.

But enough about the future, or my vacation. Let’s focus on what I’ve got for ya’ll today, shall we?

You might remember me mentioning Ayrton Senna at the beginning of the last MegaDriving. Some (including myself) call him the greatest Formula 1 driver to ever take the green flag, and if you’ve ever seen a race he was in, you’d be inclined to agree. In his 10 years competing at the highest level of motorsport in the world before his tragic death in 1994, he took home three world championships, 41 wins, 80 podium finishes, and 65 pole positions (including the pole for his very last race), and became a national hero in his native Brazil (not only for his accomplishments on the track, but off track as well).

In other words, he was damn good, and damn popular. And when it came to sports games in the early 90s, that was criteria enough for Senna to join the likes of Michael Jordan, Deion Sanders, and Evander Holyfield as someone to get their very own game. And just like the latter two, he went with our favorite company, Sega. 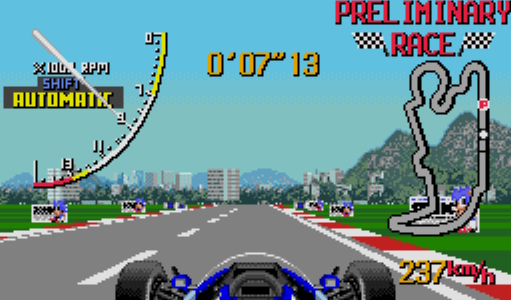 Developed as a sequel to Sega’s arcade and Master System classic, Super Monaco GP, Ayrton Senna’s Super Monaco GP II (referred to from here on out as SMGP2 because that’s a bloody long title to write over and over again) was released in ’92 on the Game Gear, Master System, and Genesis, after Senna’s third F1 title and at the peak of his popularity.

It had three modes, Practice, Senna GP (your basic “single race” mode), and World Championship, which is exactly what it says on the tin. Championship had two modes, Beginner and Master. Beginner was a basic championship season mode, using tracks based off of the 1991 F1 season. Master, however, didn’t really make the field too much stronger, but it certainly made the season more interesting, with team changes and rival races, which allowed you to take another driver’s car (relegating them to your old decrepit ride), should you beat them in consecutive races. Definitely not something you’ll see in real life F1, but it definitely makes the game more interesting. 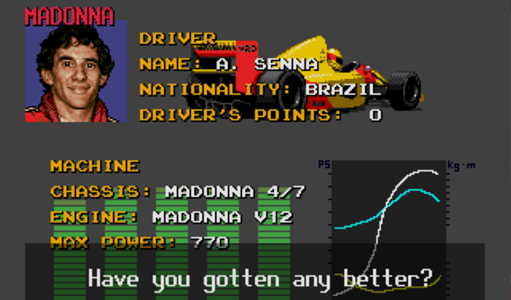 The game itself was very… Hit or miss, to say the least. Sure, it looked pretty good, and the tracks, while maybe not faithful in looks, were very realistic in terms of layout when compared to their real life counterparts. But the racing itself was very bipolar. When by yourself on the track, it’s pretty reasonable in terms of control. But when you’re surrounded by other cars, I dare you to not make contact and completely ruin your race.

Seriously. The AI drivers give you no quarter, and even the slightest bit of contact slows you to a crawl, whether you initiate it or not. And if you even so much as let off in the corners for more than a second, you’re gonna get freighttrained unless you’ve got a pretty sizable lead. For a game that boasts “the most realistic driving physics”, that ain’t very realistic. I know I whined about Virtua Racing being very unforgiving last article, but this might actually be worse! Just, so frustrating…

All in all, this didn’t work very well. Electronic Gaming Monthly, the same magazine that gave its predecessor a 9.5, gave this a 6.25, quite the drop. And even though I’ve become quite the fanboy for Sir Senna as of late, I have to give it a thumbs down. 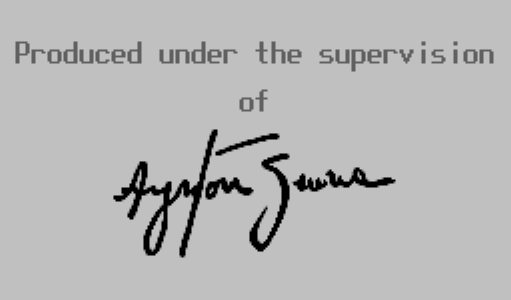 And there you go. Two articles in a row with a negative review. Don’t worry, I’ve got something that’ll change this trend in mind for next week. In the mean time, leave any and all feedback here, or in the forum thread. Thanks for reading!