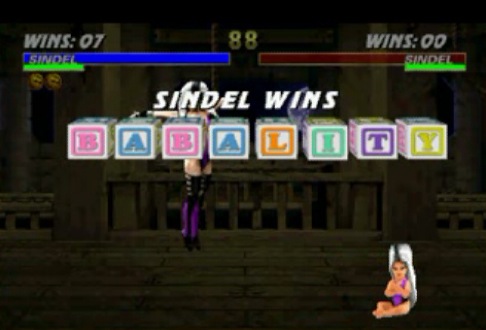 In replaying Mortal Combat 3 over the week, I wasn’t struck by the violence, the blood, or even Sheeva’s clevage.  I was floored by how nice and pleasant the game can be.  After brutally beating your opponent you can give them a gift via friendship or even show them mercy and give them a second chance.  Everyone deserves a second chance, heck I’ve had a few, and MK3 reinforces the good nature in gamers by delivering pleasant gifts such as shadow puppets, bubblegum, and even a joyful faced snowman.  However, the cutest of the cute is clearly the babalities.  Chubby faces in cute little outfits, what’s not to love!  I’ve decided to go through each babality and give each baby a grade of cuteness.

Who is the cutest Mortal Kombat Kiddie?  Hit More to find out.

Shang Tsung, final boss from the first game, makes an adorable baby in the third game.  The long hair and suspenders paired with the  eye shadow makes for a baby Anne Geddes would have no problem taking some cute (see: weird) photos of.  The only thing holding him back are his yellow pants.  What’d you do baby, pee your pants.  No way am I holding a piss baby. Grade B-

Sindel wasn’t exactly a cutie pie with her Bride of Frankenstein hairdo.  But then again, Clint Howard isn’t a prized peach exactly, but he was the cutest frigging kid ever in Gentle Ben.  The freaky poof is about as adorable, looking like a baby Snooki on Halloween.  But when Halloween’s over, its time to take off the costume.  Sindel change her look, and I’m not sure this would be a hit around a Midwest dinner table come Christmas time.  Grade C

Jax sits there, giving just enough sass to make him seem like a baby baller.  The tiny metal arms are a nice touch, but what’s with the outfit?  Have you ever seen a baby wearing pants and not a shirt?  Dumb Baby.  Grade C-

Now this is what I’m talking bout.  Baby Kano knows all cute babies wear shirts and diapers.  The red and black really works for me and combined with the metal sling.  The kicker is the metal faceplate.  Cyborg baby?  Sign me up! Grade A

Maybe grading Liu Kang right after Kano isn’t fair, but that how the cards were dealt.  There’s something about a baby with a full head of hair that freaks me out.  The red and black is appreciated, but the pants/no shirt combo is lameo, dumb baby.  Liu Kang Baby makes me angry for some reason.  If my best friend had him as a child and asked me to be the godfather, I’d say “No way Jose.”  My best friend, Jose, would be devestaed.  You’re lucky you have a head band, dumb baby.  Grade C+

Sonya Blade is giving off way too much sass considering she’s wearing.  Vomit green is not a flattering look on anyone.  Put it on a baby and it makes me think she vomited all over herself.  Long hair, still freaky.   And a sweat band.  Babies don’t need to work out.  Sonya is sending a bad message to the youth of the world.  Grade F

Striker is adorable with this hat turned sidways.  And he’s holding his little hands in front of him?  The blue and white tee is pretty fun and I could see that easily being sold in Target.  Striker a pint sized fashionista?  Who knew?  Grade A-

Smoke, Cyrax, and Sektor can all be lumped together because they’re all the same save a color swap. They pretty much look exactly like there adult versions.   The next person you see, imagine they look like they do now, except tiny.  Scary.  Just because they’re robots doesn’t mean they get a pass.  Grade D

Baby Sub Zero would be a cute baby in his old costume.  But his new costume sucks.  It sucks even harder on a baby.  Two blue strips do not make for an outfit.  This baby must be freezing.  Grade D+

Nightwolf is cute as pie.  The light blue pants, brown moccasins, and black vest are a cute outfit as is, but then add a blue headband with feathers and red war paint, and you got your self a baby that’s ready for the Thanksgiving pageant.  Someone pass this baby some turkey.  Grade A

A baby with four arms?!?!? This baby should never have been born.  Grade D

Kung Lao’s vest, belt, and wristband combo would nab him a high grade.  But his giant hat is just too big and covers his eyes.  And everyone know a baby’s eyes are the window’s into a baby’s soul.  No soul, no go.  Grad C

Unfortunately we have to end on baby Kabal.  First of all, forest green and black are so early 90’s.  Where do you think are, an Earth Day celebratory bbq?  That mask is hideous.  Baby Kabal, don’t you know that ugly babies are still cute in an ironic way?  Lose the mask, get a cotton jumper, then we’ll talk.  Grade D-

Clearly Nightwolf and Kano are heads of the class.  But if I had to choose just one baby, the clear winner is Kano.  He’s a cyborg baby for crying out loud!  Who do you think makes the cutest baby?