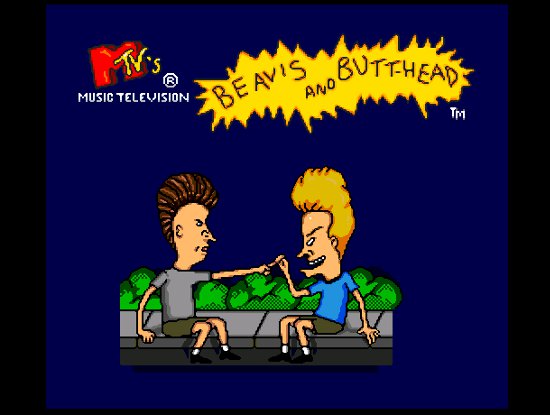 I never really watched the Beavis and Butt-head shows growing up. That seems to be for the best. Maybe the show was more enjoyable back when it was socially relevant, but somehow I doubt that. To be fair it has its moments, but overall the low-brow humour is a turn-off for me. It’s also very heavily rooted in pop culture from the 90’s, so it’s not always the easiest thing to follow. This feature isn’t about the show though; it’s about a game based on the show. So what happens when you take a bad show and make it into a video game? Well, you get a bad game. Hit the jump to find out just how bad I’m talking.

I like to start by talking about the first terrible thing that I notice when playing a game. This game stops me from being able to do that because it all hits you at once. Everything that could be bad in a game is bad in this game. Except the controls; you can move around fairly easily, the buttons work the way they’re supposed to, and nothing feels laggy or delayed. But having good controls doesn’t come close to saving this game. I don’t think anything could possibly save this game.

I guess we’ll start with the story. Basically what happens is Beavis and Butt-head find out that there’s a Gwar concert coming to town, so they buy tickets for it. Unfortunately tragedy strikes and your tickets are eaten by a neighbourhood dog. The dog pukes the tickets back up, but old man Anderson runs them over with his lawn mower. This sends pieces of the tickets flying into random locations all over town. Now it’s up to you to find all the pieces to put the tickets back together. How did any of this happen? The dog in the game looks like a little poodle. There is no way it could have got the tickets from Beavis and Butt-head. Furthermore, what kind of supersonic grass shooting device is on this lawn mower? If it can fire a piece of paper clear across town into the mall, why are there not pieces of grass all over town as well? 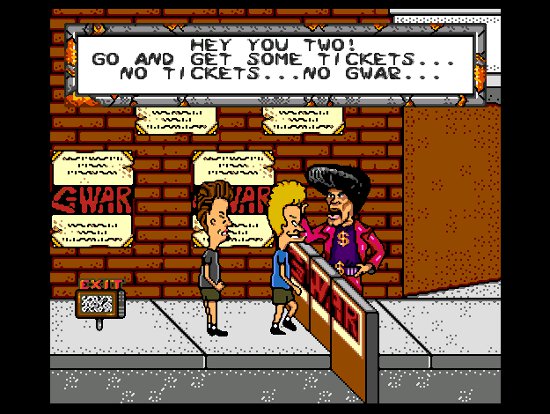 Heh heh, hey Butt-head, what if we, like, buy more tickets?

While this scene plays out you also get the treat of listening to some of the finest voice work in a video game ever. Basically the quality is terrible, and on top of that there are only about 6 or 7 different phrases in the game, but lots and lots of talking. After playing this game you will be tempted to strike people on the streets for saying “this sucks”, “we’re there, dude”, “alright, Gwar” or “change it”. There’s also a lot of burping and farting, just to class up the whole experience. In fact, that’s how you attack people. Yes, I killed several people by burping at them. It gets old very fast to listen to people pass this much gas. Even for people who like low-brow humour this must be over the top.

So once you get past the story and mute your T.V. the game play rears its ugly head and starts to suck. You’re thrown into Beavis’ or Butt-head’s living room for some reason with no indication of what you’re supposed to be doing. You can walk into a bedroom and all around the living room, but you can’t seem to go outside. Intuitively, you go from level to level by changing channels on the T.V. Of course you need to grab the remote to do this, but the game doesn’t like to differentiate between things that you can and can’t pick up, nor does it like to give you direction. Basically this game plays like an adventure game with people who try to kill you. It all revolves around getting item A and taking it to point B to trigger event C. Sometimes event C is getting money, sometimes it’s getting a ticket piece, but all of the time it’s a pain in the ass. 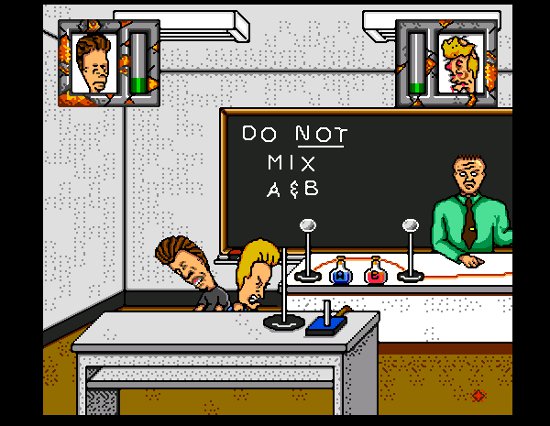 Hey Butt-head, the writer guy just, like, said something about A and B and its, like, on the blackboard heh hehhhhh.

Take this instance for example and think about whether it makes sense to you. At Burger World you have to go to the dumpster to pick up a dead rat. Then you have to go inside, place the rat and some fries in the deep fryer, wait until it gives you fries, and then give the rat/fry mix to a dude in line. He gives you 50 cents for this. Luckily he also throws up, and in his puke is one of your ticket pieces! Fucking what? Somehow I have trouble believing that a man who eats paper off of someone’s lawn would throw up from eating a deep-fried rat. Or maybe it was shot into his mouth across town like what happened with the mall.

If you write off all of this nonsense as a strange product of low-brow comedy, Generation X and video game logic the core game is still terrible. The most ridiculous crap flies at you for no clear reason. In the mall high-speed shopping carts come at you, while at the burger joint you’re bombarded by skateboards and bowling balls. Contextually it kind of makes sense for those things to be there, but why is someone standing just off screen firing them at you? Furthermore everyone in town has it out against these guys. They must all be in gangs too because they all look the same. You have a guy with oil, some security guard guy and some pissed off rich girl. Everyone attacks you without provocation in addition to the projectiles flying at you. It’s not really that hard to stay alive, but it’s a huge pain in the ass. Everything respawns once you leave the screen, so you can never really be safe. 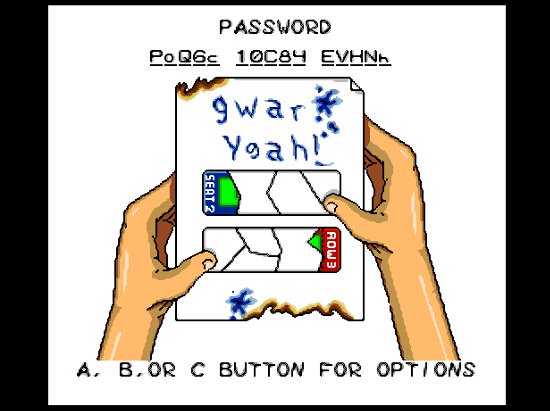 Overall the game isn’t terribly broken, it’s just not fun to play. It’s not fun to have to search everywhere for a bunch of random objects then try to figure out what to do with them. It’s even less fun when you have to do this while being bombarded by hazards and enemies. If you don’t have any emotional investment in Beavis and Butt-head you won’t be inspired to keep playing this game. The game refuses to give you a reason to play it other than the fact it has a licence attached. The game is a quick cash-in that isn’t worth your time.

P.S. Thank you to Matt Jay for recommending this game way back in July. See, Sega-addicts, your input is actually important to me! 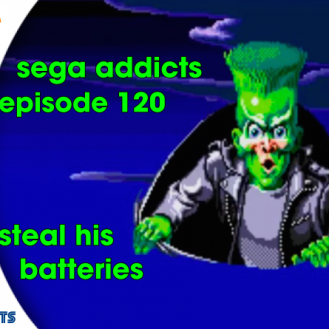