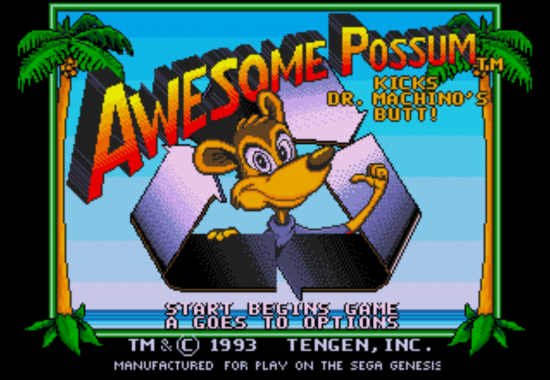 Sonic the Hedgehog as a game and as a character is a response to Mario. For years people had been playing as a pudgy, slow human and it was about time someone mixed things up. While Sonic 1 isn’t even that great a game, it was incredibly successful. This had almost nothing to do with the quality of the game and everything to do with the uniqueness of the character and the speed of the game. In the brave new world of 16-bit gaming people wanted fast and flashy video games. With the success of Sonic, there would naturally be imitators.

Many companies quickly squirted out cheap copies of Sonic. There was a constant stream of smart-assed, super fast land mammals and outside of their common origin they all shared one facet. They sucked.

While most of the mascot ripoffs from the 90’s were equally awful one sticks out to me more than any other. It’s not Aero the Acrobat, Rocky Rodent or even Bubsy. Today I’m going to talk to you about Awesome Possum.

Hell, let’s just start by dissecting the main title screen. The font is an obvious nod to Indiana Jones. It even has a neat little subtitle, “Kicks Dr. Machino’s Butt.” Well that just covers all of your bases, doesn’t it? They’re certainly not taking any chances with the villain. Tengen really couldn’t have set him just a liiitle bit farther from Dr. Robotnik? And including the word ‘butt’ tells me he has attitude. I mean, how was I supposed to make that assumption myself? Only a fool would trust the audience to infer anything about a character. And if you weren’t sure yet, when Possum pops out he straight up TELLS you, “I’m awesome!” How could you not believe those coked out eyes. Someone on that much coke can’t control their filter system and is constantly spurting out truths. That’s not all he says. 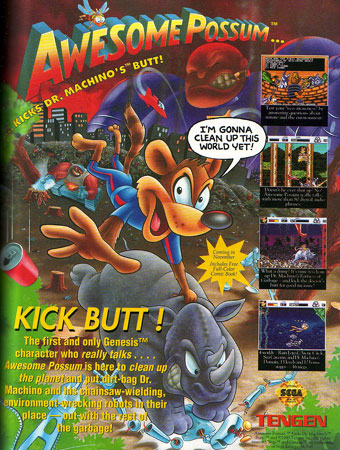 This is an ad for the game that appeared in magazines around Awesome Possum’s release. Check out the caption. “The first and only Genesis character who really talks.” There’s no way I’d get tired of the same 3 or 4 garbled sayings being shoved through the Genesis’s sound system like a sausage grinder.

Speaking of insulting the players’ intelligence, check that out. Most games just go with ‘Press Start’ but press start to what? I can’t tell you how many times I turned off a game right at the menu screen because I was afraid what the start button might do. Awesome Possum isn’t afraid to waste any precious pixels to telegraph what may seem like an incredibly obvious function shared almost universally by every game ever. That’s incredibly brave considering the game’s message. Yeah, that’s a recycling symbol he’s popping out of. This explains where the money to make the game came from. I sure hope they didn’t stuff it with heavy-handed commentary and messages. 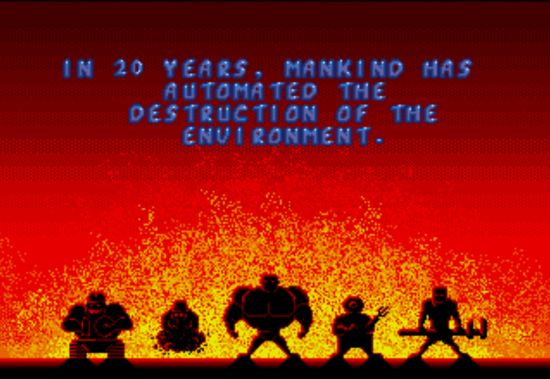 Anyway, throw some palm trees and a nice ocean-scape in there for good measure. This shows us that he’s a cool dude who hangs out in cool places like Hawaii or Tahiti. Both of those places have palm trees and are cool. 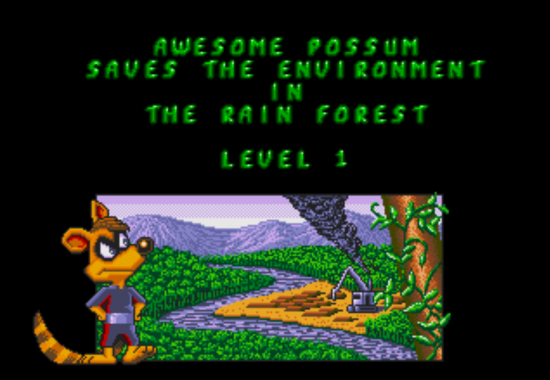 Let’s get started. Check out the attitude on this guy. I can’t wait to play it. I’m so excited I didn’t even notice that he looks completely different than in the title screen.

Remember what I just said about getting tired of Possum talking? That happened about 5 seconds in. This little bastard won’t shut the hell up! He’s yammering nonstop with sayings like, “Oh boy!” and “Wow, that was incredible!” even when nothing interesting at all has happened. Sometimes he seems to congratulate himself for being attacked by a chainsaw-wielding robot. I guess that IS kind of cool, but not the way Possum seems to thing it is.

The graphics look like a Game Gear game. An ugly one. They’re obviously trying to ape Sonic’s environments but completely missed what made those work. Instead of simplistic, colorful stages, Awesome Possum just has a mish mash of brown and green tones. And the Sonic ripping off doesn’t stop there. Literally everything about this game is directly taken from Sonic. 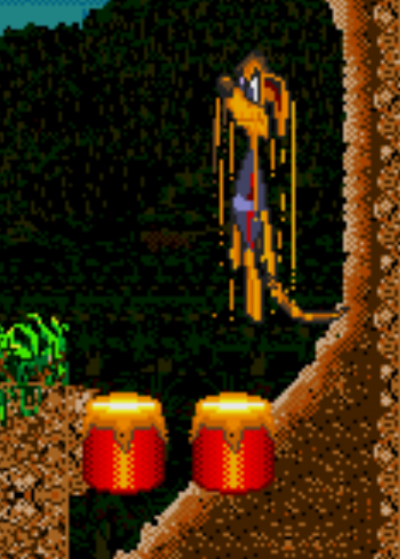 Instead of springs we have drums. 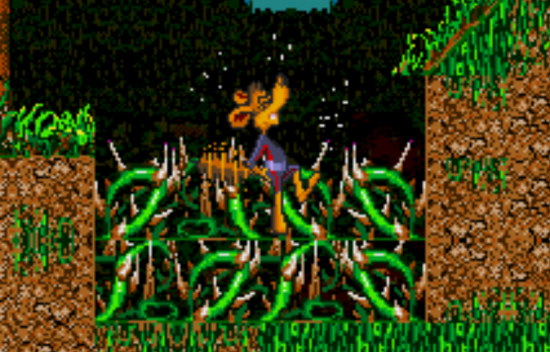 He even freakin’ spins when he jumps or goes fast.

This could all be forgiven if the game played well. And it sure doesn’t. Awesome Possum slides around on any surface like he’s running on ice and wearing skates made of butter. The lack of traction is meant to make the game feel fast and loose like Sonic but instead just feels loose like a tequila squirt the day after your friend’s bachelorette party. It also makes you wonder if you went down on the stripper but that’s a whole different thing. On top of this the hit detection is AWFUL. Hitting something on purpose is incredibly difficult. If you’re trying to do something specific like kill an enemy or jump on a spring/drum you’ll be trying 10 times.

The hit detection and sluggish, unresponsive controls give the enemies a huge advantage and Possum drops like a fly over and over again. When a game already has such a frustrating title screen, you want it to play well.

Screw it. I’m done with this game. You can consider this a review of the title screen and 2/3 of the first level. I refuse to go any further. Awesome Possum Kicks Dr. Machino’s Butt is one of the worst games I have ever played.