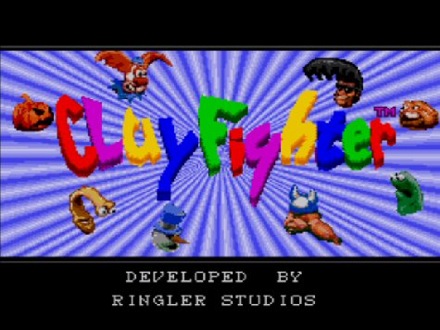 This week, I decided to look into nostalgia and review the beginnings of a series I love.  Clayfighter, developed by Visual Concepts Ringler Studios and released by Interplay, was not the game of my childhood.  I played Clayfighter: Tournament Edition and Clayfighter 2, both games that were improved and much less glitchy than the original.  When I downloaded Clayfighter for the Virtual Console on Wii, I had no idea what I was getting into.

The story is threadbare and hilarious.  All the fighters have one goal in mind; to be king of the circus.  That’s it.  I love it.   The twenty seconds of story got me in the mood to really cream some clay.

Do Clayfighter’s fights live up to its visual style?  Hit more to find out.

Fighting is horrible.  Combos do not exist.  Jumps are floaty.  Attacks do not feel tight to button input.  You cannot defend properly.  It’s not button mashing, but fights boil down to slap fights.   Special moves don’t help to break monotony and aren’t at all useful.   It is simply not fun to participate in the fights.  More enjoyment cannot be had by increasing speed or difficulty.  Watching your character fail around, nearly helpless to counter or defend against jump attacks is quite depressing.  A lot of these glitch issues were addressed in the Tournament Edition, and I wish that was released instead.  But, what we have here is a failure to activate any sort of stimulation in one’s brain besides frustration.  The lack of distinctive animations doesn’t win the game any brownie points either. 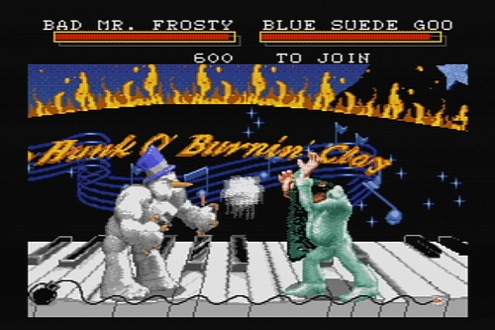 For most characters animations for varying strengths of attack are the same but slower for more powerful hits and faster for quick attacks.  Sameness grates the player, washing away what little patience is left after experiencing the game play.   It’s unfortunate because the character models and style are fantastic and loveable.

The look of the game, from stages to fighters, is a brilliant use of clay that separates this fighter from any other.  Background stages are absurd, fitting perfectly into the world.  The golden statues of Tiny’s coliseum Bad Mr. Frosty’s penguin friends, and a random lava river flowing through Bonker’s play space all inform the characters and intrigue players.  Sometimes I spent more time looking at the little details than I spent on fights, a much needed distraction.  Characters are hit, bodies getting smushed and splatter about; generating the best humor from the games clay related gags.  The color, texture, and forms of the clay make these characters more memorable than most of them aught to be.  The most iconic character is Bad Mr. Frosty.  Taking a snowman and giving him a frown must have spoken to gamers’ inner child, the one who would stick a carrot and two coals not on their frozen creations face, but on and around the privates area.  Other character have there own lovable traits as well, like how Blue Suede Goo uses his pompadour to block or Tiny’s ridiculously distorted face.    But I want to take time for a closer look at everyone’s favorite characters, The Blob, and see why he (or she?) is the most beloved.

The Blob: Literally a blob of clay, shaping himself (herself?) into various weapons such as a boot, a saw blade, boxing gloves, etc.  What really makes The Blob a great choice are his eyebrows.  The emotions, rage, pride, whimsy, etc, that are expressed from this lump put him head and shoulders above the rest of the pack.  No small feat considering he lacks head and shoulders.  His animations are also unique for every move, a sign that the developers knew they were working on something special.  His moves were powerful as well, the boot kick having a long reach that deals high damage. 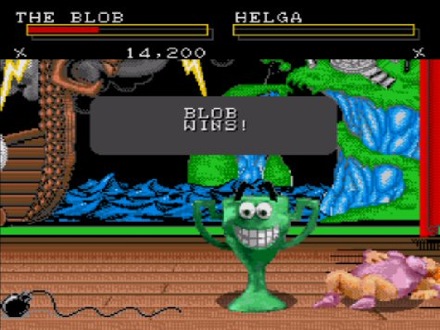 It’s strange that the one character that could have come off across as uninspired is held in such high regards by fans of the series.  Perhaps because the lack of distinct features, players can layer there own ideals and feelings, filling an empty shell with more heart than can be found in all the other characters combined and making a connection with  the audience that some games could only dream of.

The music of Clayfighter tries to be wacky and fun but fails, boiling down to repetitive goofy sounds that appeal to the youngest of children maybe.  The announcer is the best part of the sound design, giving it his all introducing Blue Suede Goo and Helga before their inevitably dull battle.  Whoever voiced the announcer can rest easy, knowing his day’s work was well done and ranks up the announcer from Ready 2 Rumble and most Capcom fighting games. 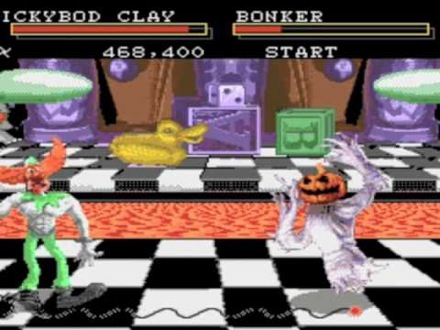 When you final turn off Clayfighter, your rose tinted glasses will have been cracked to a million pieces.  It’ll shake the foundation of a once beloved series, making you question why you ever played any Clayfighter in the first place.  But as many of our reactions to childhood loves is an overreaction.  The game doesn’t play well at all, but has many redeemable features and was a stepping-stone to better days.  We all need to go a little easier on our youth, but it doesn’t mean we should revisit it.

Golden Axe and Altered Beast were almost in a remake together