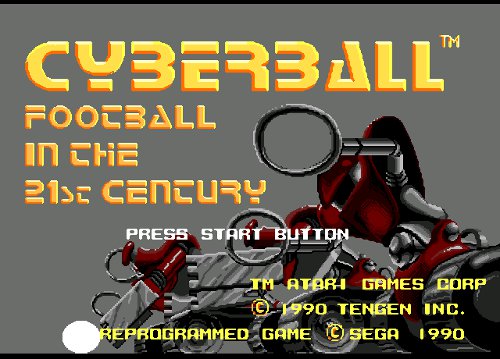 If you see this image, turn off your Genesis, it’s a trap.

Before I begin, I want to point out that I played only a few matches in this game. I lost 36 – 8 and then 23 – 0, then I threw down my controller, stopped the game, and yelled more than a few words that I could never say in a public place. I’m by no means a fan of sports games, and typically I don’t enjoy them even when they are actually good at what they do. But this game is just so horrendous that I may never partake in physical activity again. Read on to find out what’s so bad about CyberBall for the Sega Genesis.

This game bills itself as “Football in the 21st Century,” probably because it’s played entirely by robots and at the time the 21st Century seemed far off. I don’t see how robot football could possibly be more enjoyable than human-played football, but whatever; I guess I’m too old-fashioned for this game. Also, is anyone working on football robot technology? Is the government about to deem football too dangerous for humans to play? I don’t understand how a scenario could ever arise where a country decides to abandon the national heroes of professional sports in favour of overly expensive, nameless, faceless robots.

In addition to this, they also decided the rules that they’ve played the game under for a hundred years just won’t do any more. There are now 6 downs, it takes half the field to get a first down, there are 6 periods of 3 minutes, kind of. Time barely runs down when you’re actually playing; it mostly runs down when you’re trying to pick a play, which is hell in and of its self. I think there’s a way to kick a field goal, but no one ever really does that, and you don’t seem to be able to choose a play for that. 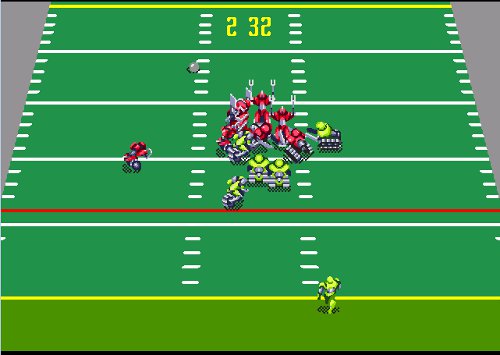 But yes, choosing a play. Good luck with that. If you don’t know anything about football, like me, you will have no clue what the hell you’re supposed to do. Furthermore, you get about 5 – 10 seconds to figure something out. Basically, unless you have something planned out already, you’re going to end up choosing something at random because you have to. Also there doesn’t seem to be anyway to back out after you’ve chosen an option. For instance, if you pick Pass, but none of the plays appeal to you, you can’t back out. What makes things worse is you don’t always get the same 4 plays, so it’s very possible that this could happen to you, in fact this has happened to me several times, and I only played 2 matches.

So say you pick a play and you think you actually know what’s going on, then you have to deal with the A.I. To sum it up: your team’s A.I. is garbage, the opponent’s is fantastic. I don’t know if I just picked a terrible team or if the game is just really imbalanced, but there was never an offensive play where my defence didn’t fail me. The reason that I lost so miserably in both games was because I rarely moved the ball forward. Miraculously in one play in the first game I made a pass (a feat that is nearly impossible) and I ran it all the way in. This never happened again, at least not for me. Every time I was on defence it seemed like the quarter-back was impossible to reach, until he threw a perfect pass half-way across the field to an open player who then would run the ball safely into the end-zone. Unlike every other team-based sports game I’ve ever played, it seems to be impossible to change which player you are controlling after the ball is given to the QB, so basically it’s up to the computer players to play defence if you’re not close to the runner. Even more basically: you’re fucked. 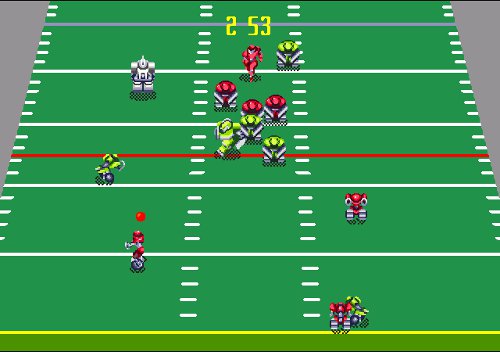 I took this a bit late, but basically 3 defenders boxed in the quarterback, making it impossible for me to rush him in time.

Knowing that you’re not in control of anything in the game is a very frustrating feeling. It’s even more frustrating to be punished when the computer players on your team are the ones failing you. Even by sports-game standards this game is not fun. Why do the rules have to be so different? Why is everything about the game so unintuitive? Why did I bother to play a second game of this shit? And CyberBall – what’s cyber about robots? This should be called RoboBall or AndroidBall, anything but Cyberball. I think it’s trying to do something different, but sometimes it’s better to just go with the flow. Everything this game tries to do differently sucks and feels like a waste of time. I can’t imagine ever being good at this game, and I don’t really want to think about playing it ever again. It doesn’t even have anything to do with Halloween!