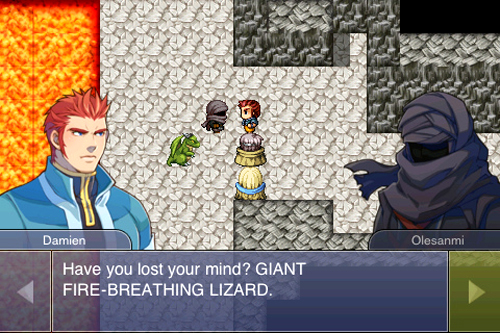 SSRN Games released their iPhone RPG, Ash, today on the App Store. For the price of $4.99 you’ll receive a brand new RPG that looks like the 16-bit SEGA Genesis RPGs you remember. According to the SSRN Games:

In a tribute to the 16-bit “golden age” of gaming, Ash for the iPhone/iPod touch invites players to relive the turn-based RPGs of the past, fusing nostalgic gameplay elements with modern innovation. By combining an engaging story, lush visuals licensed from Enterbrain, and a user interface designed natively for iOS devices, SRRN Games has produced an experience unlike anything on the App Store.

The game will be roughly 15 hours long and the developers state that they have improved upon some of the dated mechanics commonly found in older RPGs. I’m interested in checking this game out as 15 hours is a good length for me to be able to play an RPG and I’d like to see how the “engaging” story plays out.