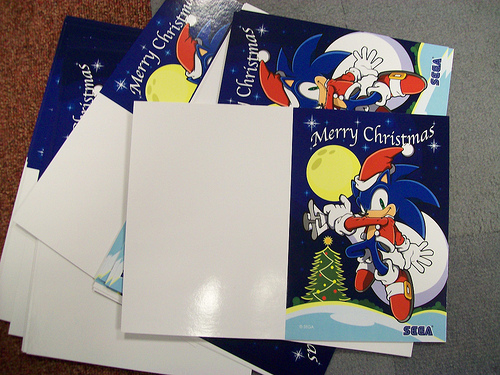 Hello and welcome to that thing what I do every week. Except from last week, for some absurd reason that didn’t get posted. My guess is it was too controversial for the internet, which is really saying something. Anyway, here at Sega Addicts Towers I have decided that since the next time you’ll read this article Christmas will be long gone, I might as well make this week Xmas themed. It’s basically the same article but with more snow imagined onto it. Well what are you waiting for? Hit the jump and let the festivities begin!

Festive Stevie Grant- writer of Top 10 Worst and Reviews of Games I Haven’t Played: I haven’t played much this week… unless you count getting and beating Cave Story Wii in one night. Then yes I did play something. I’ve actually been on an indie game kick lately. Also I got the X-Men arcade game on XBLA, loved it as a kid, still love it now.

What with the second humble indie bundle being released (it goes like this, no DRM, pay what you want, helps charity, get 5 amazing indie games). Get it.

So I played that and decided to check out Revenge of the Titans on it. I spent a couple of minutes on it and the next thing I knew it was hours later. I guess I like tower defence games now. Anyway that’s it from me this week. I’m gonna play the Christmas level from Banjo-Kazooie. Sigh, all those childhood memories.. MERRY CHRISTMAS EVERYONE!

Yuletide Brett Hatfield- Community Manager and writer of Megadriving:
Gran Turismo 5. If you were expecting something else, I feel so sorry for you. Plan on dusting off Final Fantasy VIII later tonight as well.

Alex Barbatsis the Snowman- Writer of Retro Reviews and Freaky Fridays:
I got lilt line for WiiWare and its pretty sweet. A dubstep line racer? Whatever man, check out the demo. Also, I’ve sunk about 7 hours into Game Dev Story on android. Holy crap does time fly by. My most successful game was Creepy Keep, an adventure game. Get game dev story.

Ho Ho Ho! It’s Alexander Sargeant!- Writer of Retro Reviews:
Culdcept DS, which incredibly is published by Sega and therefore ACTUALLY RELEVANT! There’s a fan-translation for it which is great because sadly the 360 iteration never made it to the UK. It’s still irritatingly difficult, but there’s something weirdly compelling about a cross between monopoly and card-duelling. Also, if you’ve played Birth By Sleep and went through that command board mini-game, that’s essentially how Culdcept functions, only if each command you laid down was a creature the other player had to battle with his to avoid paying the toll. Like all board game conversions, the AI is a cheating bastard.

Summon Night Twin Age, which is a cutesy diablo-style game localised by Atlus. It’s actually really fun, and has some great sprite work. Not quite enough powers to stay constantly interesting, but great to just blast through a dungeon given a quiet half-hour. It’s also one of the few games in the series that ever made it overseas, which will make sense when you realise the main publisher is Namco Bandai. Seriously guys, just let someone else localise all your back catalogue if you wont do it yourself.

Rant over! That’ll do me thanks. Have a great Christmas all of y’all!

Josh Newey the Red-Nosed Sega Addict- Writer of With Great Power Comes Great Games and Underappreciated Gems:
I almost showered my computer monitor with cheerios when I learned that EA was having a massive $.99 sale on their iPhone/iPad/iPod Touch/iToaster games. I snatched up NFS: Hot Pursuit (the original remains one of my favorite PS titles), Mirror’s Edge (Way better than its big brother on the console… Heh. Big Brother, how appropriate), R-Type (It’s R-Type. What do you want? It’s fun as hell), and the terrible port of RE4 that’s had me curious for quite some time now (just don’t buy it). All for $5 bucks. Sometimes I hate iPhones for being so fucking awesome.

My number has also been called on Goozex for my copy of Vanquish… And I immediately regret the decision. I was so bummed that I now have to give it up that I immediately popped it into my PS3 and started playing through the challenges and a handful of my favorite missions on God Hard mode. Vanquish is easily my favorite Sega game of the year, so I am now kicking myself for agreeing to give it away. Dammit.

Pat ‘The Christmas Miracle’ Reddick- Community Manager/ Writer of Forum News and Not-so Classics:
I’ve been playing mostly decent advergames lately for a thing I’m going to. I almost played a random Virtual On game in an arcade but all I had was a $20 and I didn’t want to exchange it for like 75 tokens. It’s been another terrible week to sum it up.

Andrew ‘Noel’ Galbraith Writer of Contemporary Alternatives and Miscoded Confidence:
I spent my week messing with The Club on the 360 for my latest Miscoded Confidence along with getting my hands on Oregon Trail and Doodlejump for the iPhone, which has since rendered the damn things battery dead on multiple occasions.

Tom Kyzivat Christ- Artist and Podcast Co-host:
I played bits and pieces of the Genesis Collection (mostly Sonic 3) and Super Street Fighter 4 with Mike. I’m maintaining about a 40% win ratio, which isn’t too bad considering I use Guy all the time. He’s devilish hard to master, but I’m determined!!!

Ol’ St. Kris Knigge- Reviewer and Podcast Co-host:
I played “Be an ass and forget about the podcast this week to go see a preview showing of Tron Legacy in 3D.” I really regret it, especially since Tron was just okay. Not even two Jeff Bridgeses could make it a great movie, whereas hanging with the cast and talking Capcom is always amazing. Sorry guys. Also, Valkyria 2 and 3 and Vampire Savior. Those were better.

Alex Riggen Claus- Editor in Chief and Podcast Host:
I’m still playing through Fable 2 and Shenmue. I’m right at the end of both of them and even though I’ve heard that Fable 3 is no where near as good as the second game I’m pretty sure I’m going to have to pick it up soon. My time with Fable 2 has been very well spent.

Replaying Shenmue has been fun as well but my disks seem to be a little scratched or something as been experiencing a lot of freezing lately. Especially while on the second disk. Luckily, I’ve made it to the third disk now and haven’t been having trouble but I think I might need to look into getting another copy before mine becomes completely unplayable.

Lovely. How festive! Why not read this whole article out loud on Christmas? Your family will love it bitch fuck cunt grandma you are so sexy. Yeah read it all out, even that!

But first tell us what festive (or not festive) Christmas games you’ve been playing in the snow (or preferably indoors). Just write it in the comments section. Please, it’s the only thing I want for Christmas! And remember, a comment id for life, not just for Christmas.

Have a good one kids and don’t rape your parents. It’s Christmas for fucks sake.