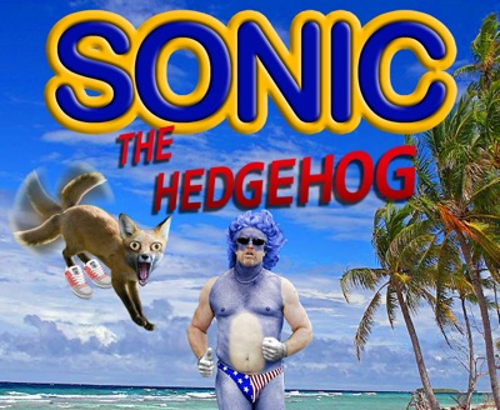 Hey friends! I’m too amazingly stressed right now to write a funny intro to this what will make you laugh so hard you’ll probably shit yourself or whatever you do. Hit the jump to read what we’ve been playing, bitches.

Stevie Grant- Writer of Top 10 Worst and Boss Attack:
I beat series 1 of Sam and Max and have started series 2. So far it’s even funnier than all of the firsts episodes put together. And that’s saying something. I also played some Dino Run SE which is super addictive. Oh! And Megaman: The Wily Wars. Obviously. Now if you’ll excuse me I need to go shout at some foreigners. See ya next week. Or at the end of this article. Whatever.

Kris Knigge- Reviewer and Podcast Co-host:
The Dishwasher: Vampire Smile is really, really good. It’s like the 3D Ninja Gaiden games in 2D (which incidentally would play nothing like the 2D Ninja Gaiden games), with a healthy serving of The Crow’s visual style. There’s a weapon in the game called the “Violence Hammer” that is essentially a cinderblock wrapped in barbed wire on a pole. 11/10.

I also played some Moon Diver. It’s like Strider, except without any of the challenge, creativity, responsiveness, or fun. With a little taste of Dynasty Warriors on the side.

Alexander Sargeant- Writer of Retro Reviews:
Played Moon Diver. Kris is absolutely right, I have nothing to add besides the game is impossible solo.

Strania, a remarkably solid Shump from G.Rev on XBLA for just 800 Gold Soveriegns.A lot of people have compared it to Einhander but that’s a bit of a stretch. It’s a classically styled vert-shooter with some really chunky models, total bastard bosses and a pretty interesting weapon score/ranking system. It’s also nice to have a chain-system in a shmup that has a really low cap, so it’s really just about using it at the right time, rather than trying to master and entire run of the game.

Legend of Heroes: Trail of the Sky/Skies…something. Fun RPG with some really well written characters. Very early in, but I’m enjoying the hangout so far. Feels like the first time I discovered Popolocrois. Also some 3DS fun with Samurai Warriors. Not the best in the series, but it’s an okay little handheld version and I really like being able to order/switch control with other generals on the map. It’s pretty much the game for ‘I want to play a Musou game on my 3DS’. It serves that purpose specifically.

Ar Tonelico 3, which is.. something. I really like it, as the rhythm of the battle-system is fun, and there’s a lot of variety in the Reyvateil now. The sexualisation of every charater is -there-, and I’m not going to tell you whether it’s tasteless or not. That’s just something you expose yourself to and say ‘Yep, I’m okay with this’ or not. It is however a game where a girl accidentally turns people into cake, so perhaps don’t think too seriously on anything. Probably the best part is that the Vanguard fighter characters have a single huge super-move each, and in the name of fairness they seem to strip down to their skivvies too, causing Hikiari Gojo to wield a large laser gun dressed in nought but a loincloth. It gave me a good laugh.

John Doherty- Writer of Take Cover:
I finished Mass Effect 2 earlier this week. All I have to say is wow. I haven’t enjoyed a Bioware game as much since my first play through of KoToR. The shooting is tight, and the ammo types have been streamlined over Mass Effect 1. I think it’s probably my favorite 3rd person shooter. I’m almost done with my second play through already. Other than that I have been playing Portrait of Ruin while I’m on the go. That game is damn hard. It’s been testing my patience all week.

Stan Spurgiesz- Writer of Night of the Living Console:
With everyone upgrading to the 3DS, I have been taking advantage of the reduced prices within the DS library. I scored both Sega Superstars Tennis and Puyo Pop Fever for under $10.

I am loving Sega Superstars Tennis. I have heard many criticize it as being a watered down version of Virtua Tennis with Sega characters. Thankfully the mission mode feels like a wonderful throwback to Sega’s rich history. In addition, destroying House of the Dead zombies with tennis balls feels quite gratifying. My only gripe is lack of online multiplayer.

I have also been loving Puyo Pop Fever. Like all Puyo Pop games, the DS iteration is addicting and a blast to play. Like with Sega Superstars Tennis, online play would have been excellent feature.

Josh Newey – Writer of With Great Power Comes Great Games and Underappreciated Gems:
I finally received my 3DS in the mail this past week, and ever since then I’ve been fiddling quite a bit with that. After much deliberation and ho-hum hype, I finally caved and bought Super Street Fighter IV 3D Edition as an intro game. It’s Street Fighter IV, so of course it’s great. The more I dig into it, the more impressed I am with the bevy of interesting new features they’ve added, especially the new perspective. Maybe I’m still drooling over the novelty of it all (something I never thought I’d do with 3D), but something about that new look is just magnetic for me. On the down side, my biggest problem with the game is just how much they seem to be catering to my type of fighter player (the terrible type). I appreciate what Capcom is trying to do with the one-touch combos, but using them is just such a cop-out. As with the simplified control scheme on Tatsunoko Vs Capcom or MVC3, I feel like I’m cheating any time I use an ultra combo. They are ultra because it takes such work to pull them off. Without the task of execution beleaguering us, how will we teach ourselves to actually play?

Also, Augmented Reality is the future of games. When I can take a picture of a Mii on my desk, draw a bloody knife in front of him, cover him in gore and add a speech bubble that reads, “SOON,” I think it’s safe to say that our medium has made it. Videogames.

Tom Kyzivat- Artist and Podcast Co-host:
Just more Marvel vs Capcom 3. Capcom is really good at making games that are extremely fun but also the most frustrating thing in the world. Mike and I still get quite animated when playing, and swear words abound! Mike actually won the first part of a MvC3 tournament last weekend (the local round), and the state finals were this week. Unfortunately he lost his second match, but he had fun. Go Mike!

Alex Riggen- Editor in Chief and Podcast Host:
I’m back into Panzer Dragoon Saga and attempting to finish the game off. I believe I only have a few hours to go and I’m looking forward to adding Panzer Dragoon Saga to my list of completed games (smiley face). I’m not a huge fan of the fourth disk as a lot of it takes place in a giant maze-like tower but it’s still pretty fun.

And that was it! In other news it was Mr.Kyzivat’s birthday recently (today)! So that is good. Sorry for being grumpy in the intro to this. I’ll be in top form next week (or worse). Anyway tell me what you have been playing in the comments and I’ll see you next week. Woo.