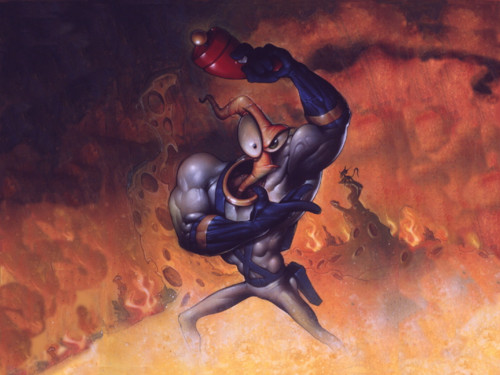 Earthworm Jim. The soil he did crawl. Earthworm Jim. A super suit did fall. You see Jim was just a dirt eating, chewing length of worm flesh. But all that came to a crash and gave him lots of power. For all of you who don’t know, Earthworm Jim is a groovy guy who rockets through the sky. I think he’s mighty fine and a hero for all time.

Yet despite his big great muscles and his really big ray gun, Jim is still an earthworm but then he’s the only one. With a super suit to make him really super strong. Jim can be a winner if you only hit the jump!

Man that theme song was great. But alas this is not about the Earthworm Jim show but indeed the game. And let’s not forget, the game did create all of the crazy villains we all know and love from the Earthworm Jim universe. So let’s start this thing with of course talking about the very first boss, shall we?

The first boss of the game is actually the least memorable. I mean he wasn’t in the show or the sequels so I guess the fish spewing Chuck just got left in the dust. Too bad as in any other game he would have stood out, but in Earthworm Jim, a game all about crazy bad buys and villains, he’s kind of boring. And yes I am using the word ‘boring’ to describe a hill-billy who throws up fish and dumps jump on you with a giant magnet. Then again he is the first boss. Hell even the mini boss of New Junk City (a dancing robot crash can) is more interesting than him. Basically, he’d be a cool and quirky villain in any other game, then a game populated by better and even funnier bosses. 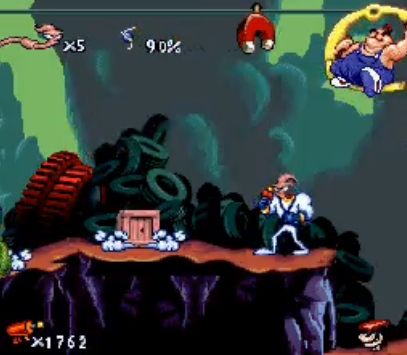 Now that we’ve got him out of the way I can talk about my favourite all time Earthworm Jim baddie: Evil the Cat. Evil is the boss and ruler of Heck (basically Hell). A level so dastardly, it includes demons lawyers and an evil snowman mini-boss. But it’s the main villains I’m looking at and Evil the Cat is one of the best. For the first part of the boss battle, you are just a worm out of reach of your suit. As the fiend fires flaming rocks towards you I’m left to wonder why he doesn’t just get in the suit himself since he has it. It can’t be that hard to kill a worm. After this section, you regain your suit and have you kill him 9 times. Get it? Maybe I’m projecting here but in terms of quirky design, he really is my favourite. Maybe this is the influence of the show again but he just seems cool this his level, just standing away in the background, watching you suffer through the intense difficulty.

Bob the Goldfish is the next boss and probably has the hardest stage in the entire game. Fucking glass submarines. Gets me every time. Either way, the best thing about Bob is that he actually isn’t a boss. Instead the ‘epic battle’ you get is a small scene of you knocking over his fish bowl. The end. Best boss ever. 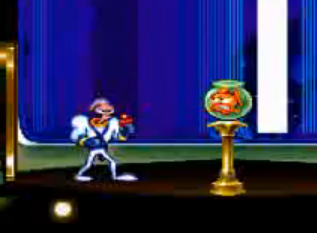 One of my other favourite bosses in this game (and there are so many) is Professor Monkey-for-a-head. Or depending on how you see it ‘Monkey Professor for a head’. You basically get what his name suggests but the strange thing is, he actually isn’t the main boss of this level. Despite being a major player in the story (the professor made the suit) the end boss of this stage is actually a robot chicken. His latter fight actually takes place while falling. This could have been cool but it’s so irritating to get him to run into his own bombs. I rarely see him mentioned in any given conversation about the game but I guess the Professor and his weird monkey head just steals the limelight in this level.

I honestly feel bad that I can’t just talk about all these bosses for a billion hours each but I like to think of this feature as kind of a ‘best of’ bosses so I’ll just have to give out some honourable mentions here. One of those mentions being Major Mucus whose levels infuriate me to no end. Seriously, I like the idea but once you have to fight him for a third time in a row he just gets a bit annoying. The other is an organ thing who appears in the penultimate level and just jumps around and spits at you. Definitely one of the easiest bosses in this game (although that’s not saying much).

I would talk about the last boss here, but honestly it’s kind of lame. All you have to do is keep shooting at her until she dies. It’s very easy. If it wasn’t for he fact that she was gross and called ‘Queen Pulsating, Bloated, Festering, Sweaty, Pus-filled, Malformed, Slug-for-a-Butt’ I doubt she’d be remembered either. However the fact that the entire last level is her body is pretty gross and a nice visual gag. 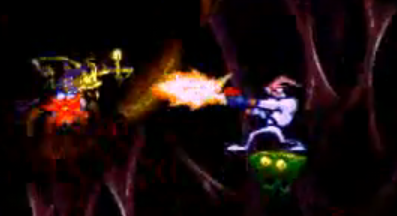 But let’s face it, she’s not the main villain of the game. The real bad guy (well maybe not but whateves) is the evil space crow who races you between each level, Psy-Crow. He isn’t actually a boss unless you fail at the level Andy Asteroids at any point in the game. And seeing how Andy Asteroids goes from hard to ‘kicking a baby’ hard, you will probably have to fight him. And hoe does this epic boss battle go down? You whip him a couple of times and he flies away to bother you another day. Lame.

So I’ve pretty much just been saying all these boss battles are lame and in all honesty, they kind of are. Definitely the best thing about them is the animation and sense of character you get from their designs, and really that still makes a fine boss by me. Earthworm Jim is all about quirky bosses, but when it comes down to it, fighting them is either super simple or frustratingly hard. However, the personality makes them by far with some of the best looking bad guys and villains of the 16 bit era. And if for some reason you haven’t checked this game out you definitely owe it to yourself to experience their character.