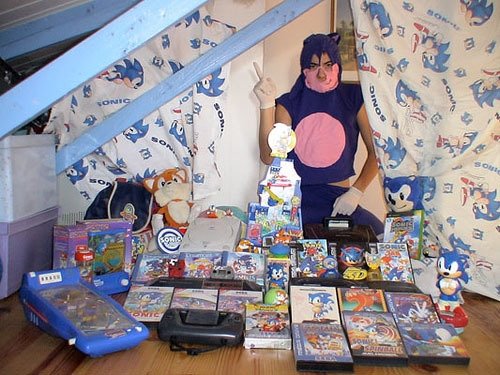 Hello guys and welcome to another Tuesday instalment of this thing where none of us talk about anything relating to Sega at all. That’s right it’s ‘what we’ve been playing’! Hooray. Amazing! Brilliant! This is all just filler! Woooooooooooooooooooooooooooooooooo!

Yeah, hit the jump to read what we’ve been playing, you sexy beast.

Stevie Grant- Writer of Top 10 Worst and Boss Attack:
I’ve been playing Bionic Commando Rearmed 2, and Castlevania Harmony of Despair. Pretty fun games, even though I can’t beat the fucking rocket level of the former game. Fucking bullshit arm manoeuvres. I also played some Vectorman and realized I’m surprisingly good at that game. But not that much mind you, I was playing on ‘lame’ mode. That’s me for this week. Have a good one and don’t die, please.

Alexander Sargeant- Writer of Retro Reviews:
As I mentioned Eien no Aselia in a previous GOTW and it turned out to be licensed like Osadai, I have no other option but to believe JAST USA are reading all of my posts here in order to choose what to aquire next.

On that note, I’ve been playing Majikoi, which is one of the best visual novels I’ve read in a while. Most of it is comedy hang-out at school, but there’s a really enjoyable close-knit kind of friendship that you find yourself a part of which is oddly refreshing despite surely being a cliche. It helps that they’re all hot-blooded badasses, so there’s plenty of people challenging each other constantly to duels. Currently only one route is translated though which is a little sad, but the game is ridiculously lengthy, I’ve been reading it for about three nights in a row, and I’ve only just managed to get past the prologue.

Bloody brilliant, and I think LeLouch voices a robot in it. That aside, Finished Dead Space 2 and Mindjack. Both pretty much as good as you’d expect of either of them. Also replaying SMT: Nocturne, because it’s the best dungeon crawler ever made. There’s so little interaction with other people, and the plot isn’t oozing out of every moment, and yet it’s an utterly compelling adventure that balances accomplishments on equal measures of preparation, moment-to-moment tactics and sheer luck.

That and Adventures of Cendy, which is a Zelda-like on the genesis, which is a lot better than its obscurity would have me believe.

Josh Newey – Writer of With Great Power Comes Great Games and Underappreciated Gems:
I finally got my copy of Dead Space 2 Collector’s Edition in the mail this past Friday. Ordered a pizza, picked up a six pack, turned out the lights, and played through the entire game right then and there. All in all, I quite adored it. The action set pieces are mind boggling, and a couple chapters will probably sit in my mind as some of the most disturbing moments in gaming. That school, for instance, will stick with me for quite a while.

That said, I seem to be the only person who can’t shake the feeling that something’s a little… off. Maybe I’m just being pessimistic, but I just didn’t experience the same thrill that the first game delivered. The action-oriented elements of the game definitely make for a more empowering, less stressful experience, for sure. But is that always such a good thing? The element I’ve always adored about horror games is its stand-out MO of stripping its players of power. With these new badass-Isaac set pieces, I started to find it incredibly difficult to succumb to the environment’s attempts to frighten me. No matter what, I’m Isaac Clark, bitch. You can’t bring me down. No matter how much ammo I am denied, no matter how many Necromorphs smash through the ceiling panels, I can’t seem to feel threatened. As a true horror fanatic, this really took something away for me. Adding a voice for Isaac was surprisingly unobtrusive, but once again, it helped to deplete one of the most appealing elements of the original title – immersion. Seeing him as a fully-fleshed out identity helps to make the game even more cinematic, stripping away much of his anonymous appeal, and thus my ability to place myself in his shoes. That difference has always made horror games a unique experience, separate from the displaced and preset experience of a horror film. I miss that.

I hate to be a whiner. I did honestly enjoy the game through and through. I’m just ready to see a character actually have to struggle to survive.

Pat Reddick- Community Manager/ Writer of Forum News and Not-so Classics:
Well this week didn’t quite turn out how I was hoping, so I haven’t started Condemned yet. I did play quite a little bit of Sonic Adventure though. I really don’t know what to make of the game. It’s much much better than Sonic 2006–much better–but it still pales in comparison to what I want from a Sonic game. To be honest I have no idea why Sega feels the need to re-release this damn game every chance they get. Playing it actually makes me more upset about the disappointment that is the upcoming Dreamcast collection. Who really gives a shit about the bass fishing game? Honestly? And Crazy Taxi is as ubiquitous as SA, except now without the music everyone is used to. Space Channel 5 Part 2 isn’t interesting enough for me to warrant a buy, so it makes me wonder who is actually going to buy this collection. Anyway, I’m through ranting about that.

I also played Dragon Quest IX a lot. Dragon Quest games are weird because I find that at any moment I can go from loving it to hating it, and vice versa. I don’t thing there’s ever been a game that evokes such mixed feelings from me, except maybe Dragon Quest V. It’s weird, Dragon Quest V came out in 1992 (in Japan), and DQIX came out in 2009 (again, Japan), yet I feel like not that much has really changed between the two games. I can’t understand how the hell this series is still around. DQV was a huge grindfest, and from what I hear so is every other game up until DQVIII. DQIX is not really that bad, but come on, it’s taken 17 years for them to figure it out? And while we’re bitching about Square Enix, why the hell do they keep re-releasing the worst Final Fantasy games? Fuck FFI, II, III, IV and give us god damn V, VI, and VII. Or better yet finish some of the new ones you’re working on that are probably just going to suck anyway!
I’m pretty stressed out, can you tell?

Tom Kyzivat- Artist and Podcast Co-host:
I dusted off some old chestnuts this week: Marvel vs. Capcom 2 with Mike (I had a lot of trouble adjusting to the Xbox controller rather than the Dreamcast–that’s my excuse for losing more than I won) and some good ol’ fashioned Power Stone 2! So, in summation, I played two of the best/most aggrivating games ever created.

Alex Riggen- Editor in Chief and Podcast Host:
My gaming week is exactly the same as last week’s. The Witcher and Final Fantasy 9. That is all.

And that was that! Another short one writing this one as I have a bunch of stuff to do and that. But you can make up for the shortness of this one by telling me what you’ve been playing in the comments! And make it lengthy folks!

So yeah, see you next Tuesday or possibly sooner if I can be bothered.