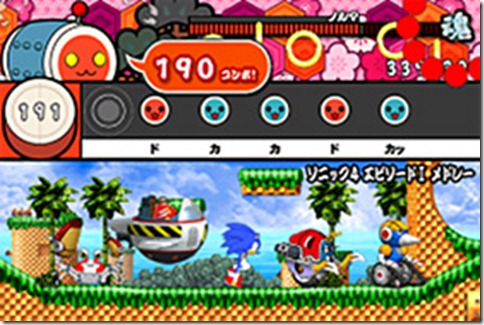 Sonic’s list of cameo appearances is about to grow even larger.  Namco and Sega have announced today that they will release Sonic DLC for the iOS drumming game Taiko no Tatsujin. The DLC will include the medley from Sonic 4 along with four other unconfirmed songs.  While you tap to the rhythm, you can spot Sonic, Eggman, and a posse of robots located at the bottom of the screen.  The game is free while the Sonic DLC will cost $7.40. A release date has not been announced.

Other then the Sonic 4 medley, what other tunes would you like to see appear within the DLC?