Well, this is part five of my retrospective. As I already announced, I watched the first movie-adaptation of The House of the Dead videogame franchise. Yes, this is the Uwe Boll movie. Never heard of him? Well, hit the jump to find out why he is infamous…

So, Uwe Boll is a director from Germany, who, funnily enough, has a doctorate in literature and his list of publications suggests he did it with a focus on media. For this movie he was the Director and producer, which leaves the writing position open for the astonishing number of four (!) different people. Among them can be found Marc A. Altman who also did the script for the movie adaptation of ‘Dead or Alive’. Enough said.

The movie opens with a narration of a character that is the last survivor of the tragedy. So, he’s telling us the story in a retrospective, already taking away any kind of suspense by telling the watchers that he will be the only one surviving. Counterproductive? Yes! I know this is a move done by a lot of directors, but the problem is that it doesn’t really work if you spoil your entire movie by already giving all the information away right in the beginning. The way this is done here, any kind of build up or suspense is already lost right out of the gate. Impressive!

After an intro full of scenes from the games, blurred by something a 5 year old could achieve with photoshop, our main cast of characters is introduced to us. Now, one of the most basic moviemaking rules is ‘Show, don’t tell’. This movie completely disregards that and gives us another narration describing the characters and their relationships with each other. This would be alright if they were only marginally interesting, but unfortunately, they aren’t: They are stupid, their dialogue is atrocious and you can’t sympathize with any of them. That’s pretty bad considering this is a zombie movie and you have to be able to identify with at least one of these characters. But nope, bland characters and a bad introduction it is! Way to kill the mood in the first five minutes…

It’s also just before that scene on the boat, where the only memorable character, Captain Kirk is encountered. Why is he memorable? Well, partly because he has a stupid name and partly because he’s got the single good line of the whole movie. More on that later though.

Remember when I called the characters bland? Yeah, this isn’t only due to a lackluster script, that isn’t able to convey any sense of individuality. The actors themselves are pretty bad either, since they only seem to comprehend the two extremes of their job: Under- and overacting. While the group of four party-goes is constantly underperforming and monotone, characters like the Captains mate are so overdone, it’s almost funny.

So they take off with the boat in order to get to the island as I stand up in order to go to the fridge and get myself a fresh and nice beer. Do I stop the movie? No, why would I? So, I come back to it and see that Kirk is being followed by the police and his ex-wife. Those are not two different entities in this movie, so don’t be confused. She gets dropped of at the other site of the island, which is pretty stupid since that gives Kirk enough time to bury his smuggler-ware. Oh well, logic. Speaking of which, the rave at the island is sponsored by Sega. Well, that’s only the second worst business decision they’ve ever taken after launching the Sega Saturn the same day as E3 back in the days…

Anyway, after some wandering around, the Scooby-Gang finds the rave-party to be completely abandoned. Well, no problem, one half is going to look around in the woods for the others and the other two try to have sex. But what’s that? The lovemaking has to be interrupted because he has to take a piss and she gets killed by zombies while he is off-screen? HILARIOUS!

Oh, did I just mention this movie has zombies? Yes, it has! At least they got one part of the title right, although they need way too long to introduce them and when they do, there is absolutely no build-up behind it. Outside of that, there are no similarities to the games whatsoever. Sure they sprinkle in some scenes from the games, but that doesn’t make any kind of sense in terms of narrative. From this point on, my memories of the movie get a bit blurry, which might have something to do with the huge amounts of Luxembourgish beer I had drunk at that point. Although to be fair, I don’t need much

So they encounter other survivors of the rave, including the guy from the beginning/end of the movie who survives this tragedy and an Asian woman that I swear hasn’t got a single line in the whole movie I could think off. She could have been mute as well. The other guy has a camera. That’s all I know about him, since he shows them the footage of the zombie attack and that’s pretty much all he does. Meanwhile, Kirk gets attacked by zombies on his boat, after his friend has already disappeared. He’s not surprised at all by the attacking zombies and we get our first action scene. Here we can see another problem with this movie: While terrible actors and script can still make for a memorable B-movie experience as long as the action is entertaining, this movie just simply fails at delivering here too. First of all, the music choices for all the action scenes make no sense at all. Instead of going for suspense or cheesiness, the techno-soundtrack is without any kind of character and just comes off as being cheap. Then, the scenes are way too long and badly choreographed, thus becoming worse by every single minute they take. Seeing Kirk shooting one Zombie after another without any kind of reaction in his mimic is just downright boring. No tension, no pacing, nothing!

Speaking of emotionless, the blonde girl is zombified and shot in front of her boyfriend and nobody really reacts to that. Everyone seems to be ok with her cruel death, even her boyfriend doesn’t show any kind of reaction. Clear sign of Valium abuse by the entire cast, if you ask me. They arrive at the beach only to find Kirk’s boat to be under attack. So they do the only sensible thing and try to swim over there, right through the zombie infested water. Naturally, they get attacked, but Kirk does his best in fending off the zombies, thus preventing Darwinism to fulfill it’s purpose, and delivers the one line worth mentioning. After that, hey try to reach the house which was build by a bold Spanish convict from the middle ages who’s also a mad scientist who builds zombies.

I just wrote that. 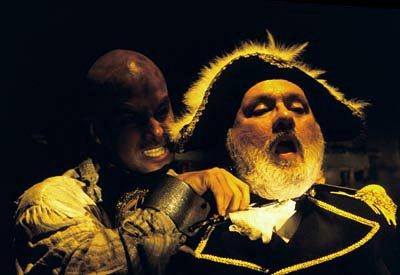 As they arrive at the House, they get attacked by Zombies and an overly long, really boring fight sequence with some terrible music pops up. This goes on for 7 minutes or an eternity, depending on your alcoholic consumption at that point, and some characters get killed in the process. Since nobody cares about them, in leave no impact whatsoever. After some short romance, that comes out of nowhere, Kirk limbs outside and blows himself up, taking some zombies with him. That would have been more heroic if it wouldn’t have destroyed the door that kept the Zombies outside of the House.

Now it literally is a house of the dead. Oh Snap!

So, the remaining characters head deeper into the mansion and discover the experiments that were going on here. They get killed off one after another until the survivor and that other woman survive, they fight against the Spanish guy who wants their body parts really bad. Wait, what? He had an entire island full of ravers to get body parts from, why does he need those… ah, screw it, give me another beer!

So they fight, the woman gets stabbed in the tits, but her boob magic or something lets her stand up one more time to give the finishing blow and then she falls down again, presumably dead. Then the AMS (yes, the one from the games) flies in in order to rescue them. It is then revealed that the survivor’s name is Curien. What a lame attempt to tie it to the games…

Does this sound confusing, terrible and just filthy? Well, that’s because it is! It’s a horrible movie, with bad acting, a horrenduous script, silly plot and bad action scenes. It’s terrible and nobody should sit through this sober. Or drunk. Like, at all. Just stay away from it altogether.

The sad thing is, that House of the Dead Overkill makes for a better movie than this. With a little bit of creative thinking and some imagination, these movie makers could have done something great with the franchise. Instead, we get a bad Zombie movie that has barely anything to do with the games that is no fun at all. It’s not even so bad it’s good, it’s just bad in every way. I felt bad after watching this.

Well, next week, I’m going to watch the second movie. It can’t get any worse, right?