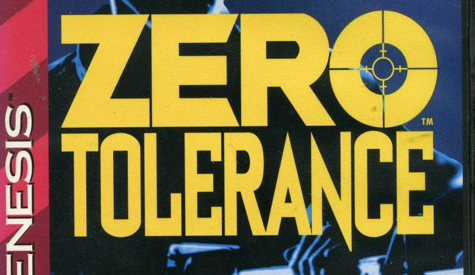 The crosshair signifies that you mean business

With all the focus this holiday on the big shooters, I thought I would go back and enjoy one of the early underdog shooters of the Sega Genesis days: Zero Tolerance.

Earth space station Europe-1 is under attack by aliens, and as a marine team of five you must engage Europe-1 and prevent the aliens from landing the space station on planet Earth.  Riveting stuff!

Mission Control, we have a problem

You can choose from one of five characters to begin the game, each with a different weapon layout: Soba, who is an incredible marksman with a handgun and body armor. “Psycho,” is the explosive expert with timed mines and grenades.  JJ Wolf, who is the Medic beginning simply with a shotgun.  “Weasel,” the martial arts expert who only begins with a handgun, and Basse the electronics expert who has enemy radar and a smart rifle.

The heads-up display of Zero Tolerance is somewhat congested at first glance, which can only lead to the assumption the game would not process at a playable speed if the actual gameplay composed the entire screen.  In the center is the screen of action, to the left of said screen is an enemy counter, and on the right side is a health counter.  Across the top of the screen is the weapon selection, and the bottom of the screen is composed of radar and the chosen soldier’s ID card (in case you forget who you are).

Why are the walls bleeding?

Beginning on Space Station Europe-1, Zero Tolerance pits you into the action with the first door you walk through.  Enemy soldiers alert you of their presence with a grunting noise before they begin firing blindly.  A few well-placed shots will eliminate the enemy quickly enough, or if you play like me you will continue to shoot their bodies just to watch them fly across hallways.

The goal of each level is simple: eliminate all the enemies and progress to the elevator.  Some levels may only hold 22 enemies, while others will hold upwards of 60 to 70 enemies.  Whether or not every enemy is killed, the elevator remains accessible.  The only downside to avoiding complete annihilation of enemies is that the enemy counter will not represent the actual floor or level currently being played.

Arguably the cutest aliens in the game are the crab aliens, which make an adorable scuttling noise and then an ear-piercing screech once they are killed. 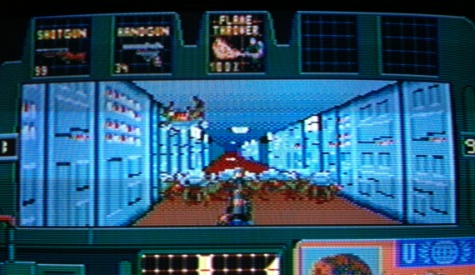 The game is split up into four sections, with a boss in-between each section.  These bosses are giant mechanized menaces, which can be taken down with a few well-placed rockets, or the ever-popular tactic of running into the room and quickly firing a few shots before retreating (rinse and repeat).

The final set of enemies look like giant beetles with velociraptor claws.  Ironically, they are the easiest enemies to kill because they rely on hand-to-hand combat as opposed to the majority of gun-toting soldiers and robots.

The most unique feature of Zero Tolerance was by far the co-op multiplayer, which required a LINK CABLE.  I did not stutter.  Accolade created a link cable for the Sega Genesis, which was essentially a double-female-ended controller cable.  Even more amazing was the fact that you could acquire one of these gems in 1994 FOR FREE by simply mailing away to Accolade. 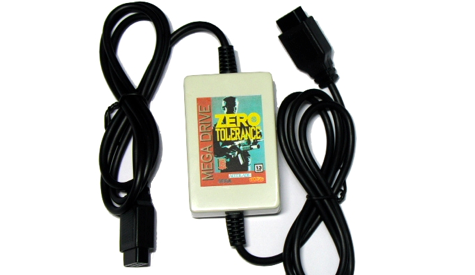 The one and only Link Cable for Sega Genesis

The downside of co-op is that your partner appears as the same colored dot that enemies do on the radar, and look exactly like an enemy soldier.  However, if you are playing this game cooperatively then you are clearly in the same room as your partner, and can see their screen without having to worry about whether or not you just put them down (although this will happen in firefights).

Overall, Zero Tolerance was ahead of the crowd by being the first FPS on a console, and the only game on the Genesis to use a link cable.  TechnoPop has even decided to release the game and the unpublished sequel, Beyond Zero Tolerance to public domain.

Between blasting and punching aliens, throwing grenades at crazed dogs, and putting out fires with your trusty extinguisher, Zero Tolerance is one game that every first-person-shooter, sci-fi, and Genesis fan needs to play.  The small screen of action detracts from what could have been the ultimate FPS experience on the Genesis, but co-op play is a worthwhile venture. B+