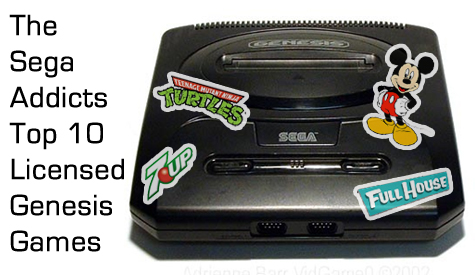 In the past few generations of consoles, licensed games have become something of a joke. They’re not only often uninspired but the development is also often rushed so the publisher can time the game’s release with when the license’s popularity is at its highest. The result is an unpolished buggy game that tries to play like a bigger budget game that does everything better leaving the game suitable for only those with an intense love of the license and even they will probably be disappointed.

That was not always the case however. The Genesis era had tons of great licensed games released for the system. Sure, there were still some terrible licensed products but there were also plenty of licensed games that were some of the best games on the console.

The following list is our favorite licensed games on the Genesis. Hit the jump to read more. 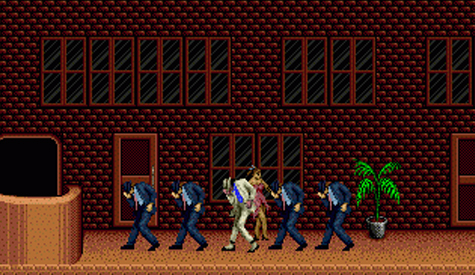 Flake: In 1990 a Shinobi-esque beat ’em up featuring the King of Pop came out and it was…pretty average. What saved the game from the fate shared by most licensed games was ingenious use of Michael Jackson’s image and music.

As MJ you go through each level saving children, dancing enemies to death, kicking the crap out of everything you see, and grabbing your scrotum (foreshadowing the legal trouble to come?) all in anticipation of a monkey who will lead you to a boss fight where you may or may not have been turned into a Turbo Charged Killer Robot in order to save the world!

21 years later, Michael Jackson’s Moonwalker remains one of those rare examples of a licensed game whose shortcomings were almost entirely mitigated by a clever and zany use of the trademarked material. 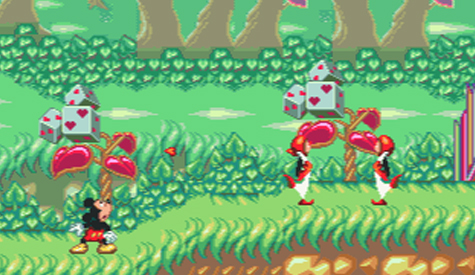 Scott Morrison: World of Illusion starring Mickey Mouse and Donald Duck is a captivating side-scrolling adventure for the Sega Genesis. As with most Disney games, the story begins as an accidental trip into a magical world, which allows for unexplained ridiculousness to ensue. Playing as either Mickey or Donald, you make your way through different worlds ranging from forests, and canyons, to candy and office supplies. Each character’s story differs slightly with varying short levels but overall their main levels are similar. The game does shine with a co-op mode in which players must assist each other to progress in situations such as reaching higher ground with a see-saw type catapult, a mine car powered in the same fashion, or simply by Mickey helping Donald pull his large feathered butt through a narrow path. To keep from appearing violent, Donald and Mickey have magic capes to wipe against enemies and turn them into helpless forms of their former selves such as turning enemy forest soldiers into peaceful flowers. The music and colorful atmosphere in each level give the game its vibrant appeal, with the candy-inspired level being my favorite as I feel it has the most personality. That’s not to say that watching a shrunken Mickey and Donald bounce around on staplers while fighting stationary doesn’t have its appeal as well. World of Illusion can be a quick romp through beautiful landscapes in co-op if you are familiar with the game while the single player game is a significantly longer experience. Regardless, World of Illusion is definitely one of the more enjoyable co-op games on the Sega Genesis. 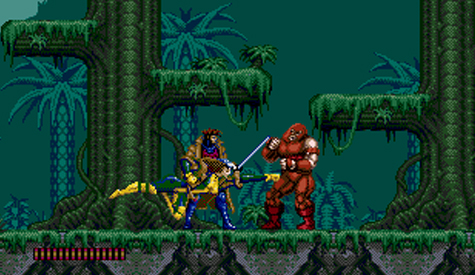 Tom Kyzivat: Swept up in the comic book craze of the 90s, it was easy to have an affinity for comic games, but X-Men stood out as a very well-put-together title, independent of its license. Interesting levels taken from the comic, the option to play as a variety of the coolest X-Men characters on the scene, special attacks based on their powers, and a 2-player capability made this a game I went back to many times. 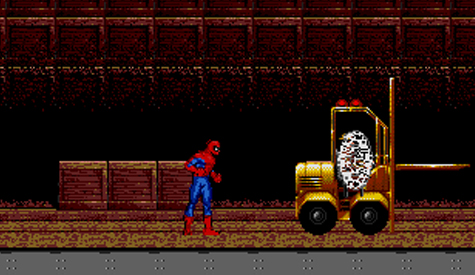 Tom Kyzivat: Definitely not as good as its Sega CD counterpart, which pretty much improved upon everything, but still a classic nonetheless. For a dorky kid growing up in the 90s, this is everything you could hope for from a Spider-Man Genesis game: good web-swinging mechanics, a bunch of cool villains, a decent story, and pretty solid graphics. Truly a game for true believers! 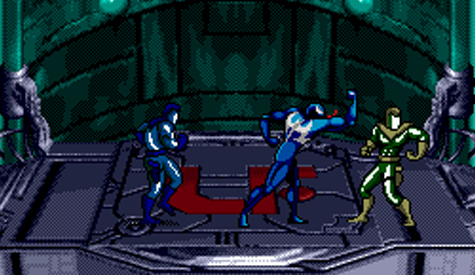 Alex Riggen: Separation Anxiety was a sort of sequel to Maximum Carnage and plays pretty similarly as a beat ‘em up with the Spider-man license. You won’t find anything new to the genre here but the ability to play as both Spider-man and Venom with cameos from other characters from the license was extremely fun. While Maximum Carnage always felt like a slightly better game visually and gameplay wise, Separation Anxiety added the all-important two player mode which no beat ‘em up should be without. 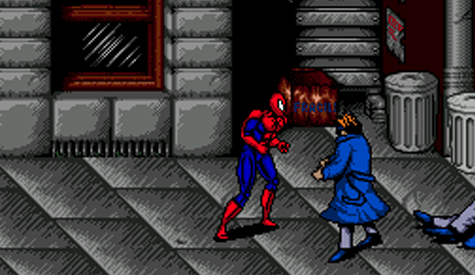 Josh Newey: Based on the graphic novel of the same name, this is the perfect game for any Marvel fan, big or small. Of course, Maximum Carnage’s main draw is that you can play as both Venom and Spider-man, but what really makes it special is its faithful, almost slavish dedication to its source material. There aren’t all that many licensed games that embrace their universe as willingly as this one, digging out obscure and exciting characters that one would never have expected to see on his or her TV screen. How many games offer assist moves from unsung heroes like Cloak and Dagger, Deathlok, or Morbius?The game got a fair amount of flack for refusing players the option to play co-op as Spider-man and Venom together, but people who say that are missing the bigger picture. What we have here is a rare single player beat-em-up that switches players between the hero and the villain in between areas, forcing them to learn and adapt to two separate ways to play within the same campaign. Really, no Spider-man fan ought to miss this one. Throw in a sound track by spoof rockers Green Jelly and a feisty blood-red cartridge, and you’ve got one licensed Genesis game that does not deserve to be ignored. 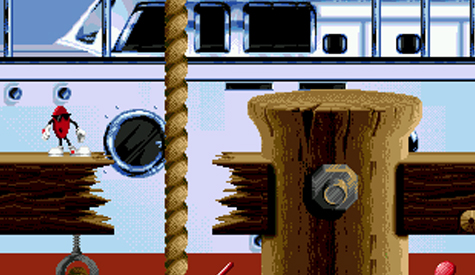 John Doherty: Who would ever think that a game about a soda mascot would not only be one of the great license games on the Genesis, but one of the best games on the console altogether. Cool Spot features everything an amazing game needs. It has beautiful art, inspired level designs, some of the best music on the Genesis, and a charm unlike any other platformer I think I’ve seen before. You play as Cool Spot, the full of ‘tude 7-UP mascot from the nineties. He is on a mission to save other spots from, well, I’m not entirely sure. You travel to some pretty amazing places as well, everything from the beach to a toy train set. There isn’t much else to say about this one. It’s a gem from the time when being a license game wasn’t a death sentence. 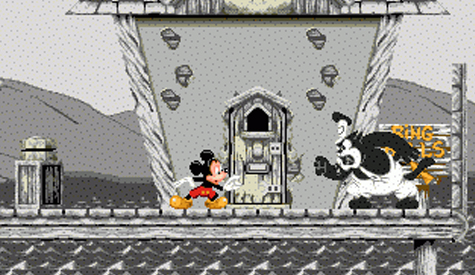 Sven Wohl: Mickey Mania is one of the few Sega Mega Drive games that I have returned to regularly after I got later systems. This is still amazing to me since I never really liked Disney licenses. I especially had a huge disconnect with the Mickey Mouse franchise. This game however marks the one big exception I have for that franchise. This is partially due to the fact that this game does not rely on its license or charm alone (even though there is quite a lot of charm in this specific game). It’s the gameplay that still holds up to this day: simple, yet well-made jump ‘n run mechanics, paired with unique level designs and very fascinating settings, coming straight from various animations starring the world famous mouse. The graphics are still amazing, especially if you take the hardware’s limitations into account. It fascinates me how well this game still holds up, which is why it holds such a high spot in this list. 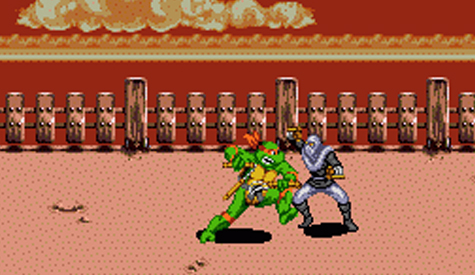 Mike Kyzivat: Home consoles goal, especially in the 80’s and 90’s, was to reproduce the arcade experience at home, and very few games could do this in that age, with arcade hardware always beating the home market, but with The Hyper Stone Heist, not only did we get a home version of the arcade game Turtles in time (albiet with silght tweeks) but it had good graphics when compared to the arcade version and the gameplay was spot on. But it doesn’t end there the developers decided to add several levels that were not in the arcade version. So this is one of those rare games that not only is a great license, but a great port of the arcade experience. 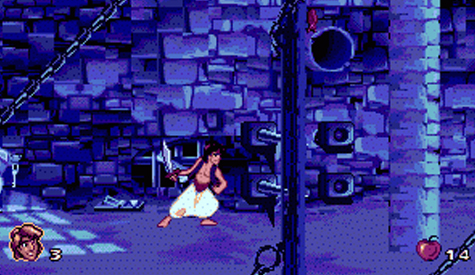 Josh Newey: Eavesdrop on any conversation about platformers for long enough and you are bound to eventually overhear feverish, elated whispers about the magic of Aladdin for the Genesis. This game doesn’t merely stand out as the model example of what licensed titles are capable of. Instead, it remains to this day one of the very best must-have games that has ever graced our beloved 16 bit system. Every inch of Aladdin is just oozing with humor, attention to detail, and an overall sense of craftsmanship that has rarely been paralleled in modern licensed titles. The visuals are fluid and never cease to amaze, featuring gorgeously detailed animations designed by people who actually worked on the film. The music is impeccably recreated, making for some of the catchiest diddies to ever grace the console, even with an inferior sound chip. The gameplay, while endlessly entertaining, is notoriously challenging, and still holds up today as a worthy adversary in the 2D action platforming genre. As you might expect, an SNES Aladdin was also released, but the Genesis title offers so much more in terms of personality, flair and character that it remains steadfast in gamers’ minds, held well above almost any other licensed game, let alone the paint-by-numbers affair that was its SNES counterpart.