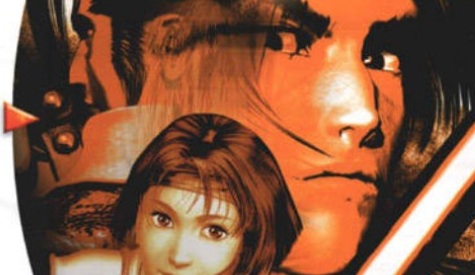 In a lot of ways, Soul Calibur for the Sega Dreamcast was the realization of Sega’s ultimate promise: Arcade quality experiences in the comfort of your own home. Soul Calibur delivered on this promise and more. With the recent release of Soul Calibur V and the re-release of Soul Calibur on the iOS, it is time to take a another look at the game that surpassed expectation, set the standards, and, ironically, set future entries up for failure.

Soul Calibur was released into arcade in the summer of 1998. I have no idea how many of you readers were lucky enough to be into the 1990’s arcade scene but this was a big deal. Before Soul Calibur hit, nothing with the same level of detail had ever existed before. Gamers today take the visuals they have for granted, expecting constant, incremental improvements as we march on towards the slopes of the uncanny valley. In the mid-90’s, we were totally unprepared for that graphical leap that came just before the turn of the century.

Here is an example: The picture on top is from one of my favorite arcade fighters of all time, Street Fighter EX2. Below is a screen shot from Soul Calibur. 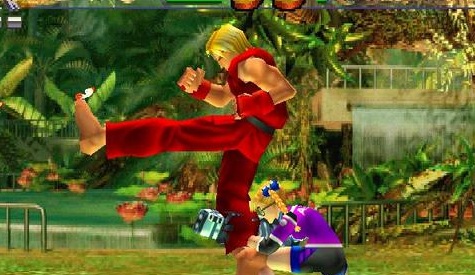 This should have been called Street Fighter 4. 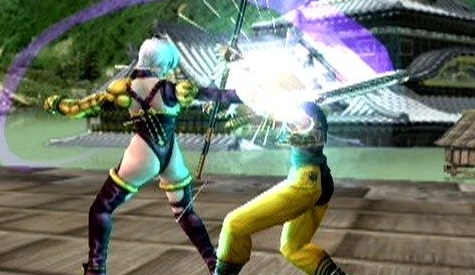 Obviously, screenshots never convey a game in motion but even here you can see several significant advances: The polygon count has shot up, clothing has distinct textures, and multiple light sources are shown. Feet do not look like rocks. The crazy thing? Street Fighter EX2 came to market in May of 1998. Soul Calibur arrived less than two months later. Progress, courtesy of the Sega Naomi.

In the arcades, jaws were dropping. Not since Rival School’s Tiffany had video game boobs been so in your face…and now they actually looked like boobs! Of course, we here at Sega Addicts are of the opinion that boobs are always better when Sega is involved. The good news is that Soul Calibur still looks great today. Any gamer with a Dreamcast and a VGA box will be able to enjoy it, even those who have cut their teeth on today’s insanely realistic graphics. Soul Calibur is one of those very few 3D fighters from the 90’s that can be shown to someone without having to defend the graphics. They were that good then; they are pretty damn good now.

Graphics were not the only trick in Namco’s bag. When Soul Calibur came to the Dreamcast, the end product was actually better than the source material from the arcades. Sega had long billed its game systems as being the arcade experience at home and then some but the difference in horsepower between home game consoles and arcade rigs meant that arcade ports were just watered down translations. Because Soul Calibur was developed for the Sega Naomi hardware, the transition was easy. After all, the Dreamcast is really just a Naomi with a little less RAM. In developing the game for the Dreamcast, Namco added a mission mode and unlockables to the game while making no compromises on the graphics or audio. The end result was billed as as “Better than arcade perfect” and was an acknowledgement that, sadly, home consoles were becoming the equal of arcades. It was the beginning of the end for arcade nuts like myself but we were able to deal: We were too busy playing Soul Calibur at home to be too existential about it. 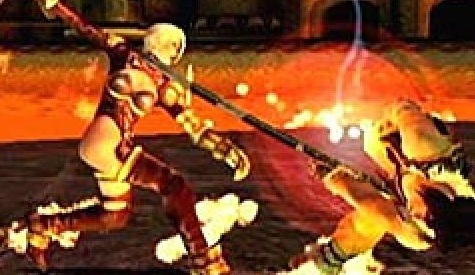 Another thing that Soul Calibur had going for it as it came to the Dreamcast was the controller. The stock Dreamcast controller is terrible for most fighters. The first thing anyone notices about my Dreamcast is the two Sega Saturn Model-2 controllers hooked up. However, when Soul Calibur is the game of the day, I dust off the standard controllers. There is simply something about Soul Calibur that works well with the Dreamcast controller – I will not pretend to be able to explain it other than to say that Soul Calibur feels right on Dreamcast style controllers (such as the Gamecube and Xbox game pads) and wrong on Playstation style controllers. Of course, this is all assuming you do not have a decent arcade stick. At any rate, the game is responsive and slick and the game does a great job of recognizing special move inputs, letting players focus on the action instead of having to be overly deliberate with the controls.

Of course, this is part of what I dread about the iOS release should I ever try it. All that silky smooth button input replaced with a touch screen? Hopefully another Addict will review that one!

Prior to Soul Calibur, 3D fighters generally eschewed that pesky 3rd dimension. You might dash along the Z-axis briefly but it was only used as an alternative to blocking; in most 3D fighters, the action was solely on the X and Y. Soul Calibur introduced the “8-way run”, allowing players full freedom to run around any which way you so pleased, all the while oriented to your opponent. This made it possible to counter and out flank, get behind your opponent, or just run the hell away if you needed to wait the clock out. 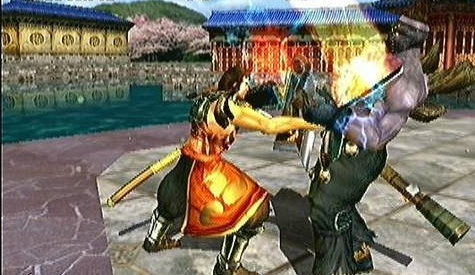 As a result of this new system, Soul Calibur took on a very distinctive fighting style. Virtua Fighter and Tekken used very specific button inputs to execute moves that, if they were more complicated than a couple punches, were highly scripted – the natural alternative to the Street Fighter approach. Soul Calibur, with attacks possible from every single direction, opted for a high aggressive fighting style where special moves are less important than intuitively predicting where the next strike will land on your character. Fights are often over in less than ten seconds and button mashing is a valid option. “Mastery” of the game, in the traditional sense, is possible but Soul Calibur is that rare fighter where everyone stands a chance of winning. It is not a technical fighter by any stretch of the imagination.

Today, the gameplay still stands up and it is not that far removed from what you will find on a shiny new Soul Calibur V disc. In a sense, that is Soul Calibur’s greatest problem: The original game was designed in such a way that there really is no way to expand but I digress; that’s an issue for another review.

If there is any area where I cringe a little bit, it is in the audio department. Assuming you remember the 90’s, you also remember how bad the vocal recordings were. We call this the “Megaman 8” effect, where, in an effort to stay under budget, a studio pays its voice actors (recruited from off the street) in sandwiches instead of money. Soul Calibur is not quite that bad but the combination of over-the-top dialogue combined with schizophrenic voices is enough to make you tap “start” repeatedly to get past the introductions as soon as possible. At least the music is good. I have never felt that Soul Calibur’s tunes were terribly memorable but the songs have a lot of energy, are suitably grandiose, and fit the setting very well.

Soul Calibur for the Dreamcast is a great game and it has aged very well. If you still have your VGA box handy, this game looks like a real winner even on today’s crazy advanced HD plasma whooziwatsit TV sets and the gameplay is just as solid as it ever was. If you have your friends over for a Dreamcast party, Soul Calibur needs to be on the schedule. You will enjoy the game, appreciate the graphics, and you can all laugh at the vocals.

House of the Dead Overkill: The Lost Reels, Puzzle Pirates and Godsrule all coming to Android