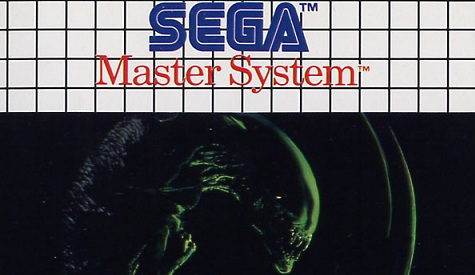 Here is a surprise for you, though: A game based off of that terrible movie was developed for the Sega Master System and it turned out pretty good.

In Alien 3 for the Master System, you guide a bald soldier (who I found out was Ripley after I died a couple of times) through maze-like levels in search of prisoners who are somehow floating helplessly in the air. Just like in the movie. As you guide your bald woman, you encounter various alien monsters who are fast, hard to predict, and can kill you pretty quickly. Your only defense is a weak machine gun with very limited ammunition. As a result, Alien 3 is a game where the controls are intuitive but the most successful play style does not become apparent until after you have been eaten a few times. Chasing down the aliens and killing them nets you no reward and instead puts you at risk for running out of ammunition when you need it the most. Instead you have to move carefully, conserve your special weapons, and take advantage of crawl spaces, ladders, and platforms to either avoid the aliens or to finish them off with as few shots as possible. All the while, the clock is counting down.

If all this sounds like it is more fun than the actual movie it was based on, there is a reason for that. The controls mostly do a great job of keeping things fun. Ripley moves fluidly through the game which is very important because the aliens tend to come out of nowhere, leaving you only a split second to react.

Speaking of the aliens, Probe (the developer), should be commended for the art assets present in this game. The aliens actually look like their big screen counter parts and were given enough frames of animation to suggest the same sort of stalking movement. Ripley is also incredibly well animated, with separate sprites for climbing, crawling, running, jumping, and pretty much everything else she does. This level of detail is rare for an 8 bit game, especially one developed by a third party. Alien 3 does have a few problems. The jumping is insane and it can be a real challenge to get through some of the platformy (that is a word, right?) bits without falling down into spinning turbine blades of death. Aiming at the aliens is harder than it should be since you cannot aim up and ahead of Ripley without also moving forward, straight into the thing that is trying to kill you. The music and sound effects are forgettable but, unlike many Master System titles, do not come across like nails on a chalk board.

I have not yet played Alien: Infestation but I hear it was pretty good. Sega’s upcoming Colonial Marines game also looks pretty nifty. Odds are, these are probably better than Alien 3 for the Sega Master System. That said, Alien 3 is a pleasant surprise and could be a real name to drop the next time you hear someone complaining about how all games based on movie licenses are terrible. Alien 3 is a well developed game with decent controls, great level design, and intuitive gameplay.

Ultimately, time spent playing Alien 3 for the Sega Master System is likely to be more rewarding than watching the actual movie.