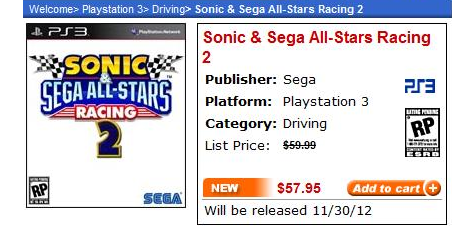 We’re all excited about the sequel to Sonic & SEGA All-Stars Racing which, as far as we can tell, is coming out late this year. But despite the confirmation, followed by speculation, followed by rumours surrounding the game, details are few and far between. However, a keen eye over at The Sonic Stadium found the game listed for a limited time on the website of online game retailer, eStarland.com.

The game was listed for release on the Xbox 360, PS3 and the Nintendo Wii only, with a release date of Nov 30th 2012 for all three versions. Each listing was accompanied by the following brief description:

“Sonic and friends go back to the track in the sequel to their 2010 kart racing outing.”

Needless to say, the listings have already been removed, and the accuracy of the juicy details is up for debate. But what say you, fellow Sega Addicts? Check out the source, and comment below.