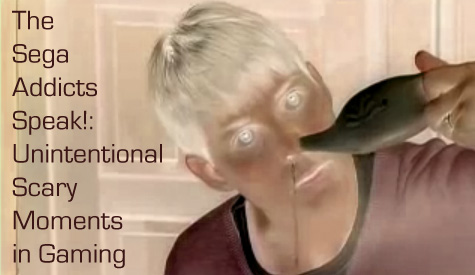 While there a thousands of games, movies, books and other media that are created specifically to terrify and scare people, many of them fall flat due to constantly trying too hard. In fact, some of my most intense memories of having been scared come from cartoons, movies and games that were designed to be “all-ages” and yet they had one specific moment or character that was extremely more scary than any horror game or movie ever was to me. We’ve decided to create a feature highlighting some moments from games on Sega consoles or create by Sega that still make it hard for us to fall asleep at night.

Hit the jump to read on and feel free to leave some of you unintentional scary stories in the comments below! 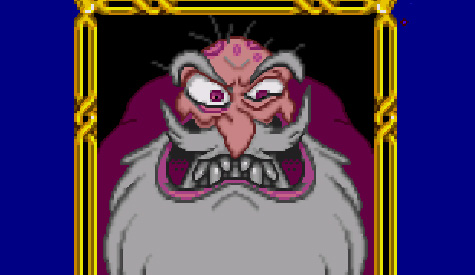 Michael Westgarth: Say ‘unintentionally scary games’ to me and I’ll immediately bark back ‘Aladdin!’ as a grimace erupts over my face. Many have fond memories of the Mega Drive classic Aladdin with many claiming it to be one of the best uses of a film licenses in games of that era. But for me and my little brother, Aladdin provided not one but two unforgettably terrifying screens that have remained etched into my mind to this very day.

The first, the dreaded ‘Game Over’ screen. Getting a game over was frustrating enough as a child, but Virgin Interactive had to go one step too far and make the experience downright traumatic by throwing up the biggest, scariest picture of the Jafar’s face imaginable along with a soul piecing cackle that made us shit our official Sonic the Hedgehog pyjamas the first time we saw it. So frighting it was that, if we were on our last life we would simply turn off the Mega Drive and admit defeat. Better to throw that last life into the wind rather than permanently staining our beloved pyjamas.

The nightmare didn’t end there, however, as another horror waited for the little boys and girls skilled enough to make it past the second level when, completely out of place, a tremendously eerie song would play followed by… His face. Ugh. AHH! TURN IT OFF WILLIAM! MAKE IT STOP!

Sorry there, I don’t know what just happened. Anyway, the face of a freakishly ghastly old man would appear and cause out bowels to empty once again.

Bear in mind that my brother and I were only wee, and Aladdin was the first game we ever got with our Mega Drive. We hadn’t even seen the damn film! Our fertile imaginations mixed with the insane graphics of a Mega Drive proved too much for us and resulted in a horrifying experience that will stay with us always.

Josh Newey: If you’re a ’90s kid like me, you’re still trying to scratch the aftertaste of Sega’s raucous Genesis marketing campaign off the roof of your mouth. Triumphant screaming, seizure-inducing lights, and angry, critical men on the TV were the bread and butter of Sega’s advertisers, and while we laugh at it now, you have to admit–it worked.

But one specific ad not only failed to infuse me with any sense of rebellion or Sega fan superiority–it literally had me bounding out of the living room, hands over my ears as its final moments inched ever closer, bringing with them that trademark guttural “SEGA” scream. No, it’s not the resonant, earsplitting and simplistic chant that flipped the ol’ fight-or-flight switch for me. This commercial was different, for accompanying that shout was the horrifying visage of a flight attendant, usually a calming presence carrying the promise of free drinks and peanuts, offering “coffee, tea,” and “SEGA!” as her eyes literally BULGED OUT OF HER FREAKIN’ SKULL.

Like the surreal boat ride in Willy Wonka and the Chocolate Factory, or the melting Christopher Lloyd in Who Framed Roger Rabbit, the true horror of this image came from the light-hearted, cartoonish tone of the commercial that preceded it. The commercial tells a whimsical farce of an aging Sega fan trying to play his Genesis on a plane using miles of extension cord and a full-sized TV. The moral of the story–get portable, MAN. The entire commercial is absolutely rancid with Looney Tunes-esque sound effects, an obnoxiously perky announcer, and over-the-top slapstick acting. Punctuating this gleefully silly set-up with a three-second image of a woman actually LUNGING at you with her eyes crawling out of your skull is not only terrifying, it’s horribly cruel and frankly, a bit misguided. Do you want me to laugh or cry, Sega? Well you’ve achieved both, you monsters.

I still get uneasy chills every time I watch that commercial. As a horror fanatic, let me tell you that pulling that off is no easy task these days. *Shudder* 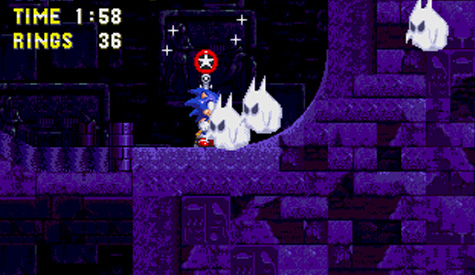 Micheal Westgarth: ‘Roll over Sonic, you’re old news, everyone knows that Knuckles is the coolest Echidna around, whatever that is.’ Was basically my mind set when I finally got my grubby little mitts on Sonic & Knuckles. I exclusively played as Knuckles for what seemed like years, which is about how long it took me to get past that infernal Battery Zone level. Oh yeah, I remember getting to the Sandopolis zone for the first time as if it were yesterday….

Cool, it’s like Egypt, which is like Stargate, and Stargate is cool. Cor blimey, look at that ace pyramid! I get to go into a pyramid for Act 2? Oh man, I’m totally excited! Oi, who turned out the lights then? Wait what’s that? Oh god, ghosts! Ah! AHH! WILLIAM! TURN IT OFF WILLIAM YOU BISCUIT!

Wow, I need to stop zoning out like that.

So yes, those spooky little ghosts appear out of no where and start mobbing you en masse. There’s no way to kill them, and they’ll just keep appearing until you’re good and dead. Needless to say, their completely unexpected appearance creeped me out to no end and I have felt a slight nervousness while playing that particular act ever since. Surely Sonic Team didn’t intend to scare the living daylights out of all the devout little Sonic fans, right? Right…? 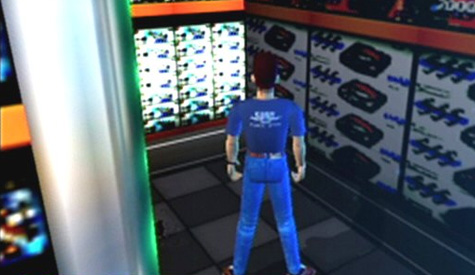 Alex Riggen: While advertised as a survival horror game, I doubt Blue Stinger accomplished much terror in anyone beyond the terrible voice acting and cutscenes. However, I did have one stress-inducing moment during my playthrough of the game back in the Dreamcast’s heyday. I was in one of the many brightly colored convenience stores and was getting pretty used to creatures hiding behind aisles and quickly eliminating them into a pile of bouncing coins. I approached an aisle and could see a shadow slowly moving around the corner. I ran around the corner ready to attach this not-so stealthy creature only to find that nothing was there. I spent the rest of the time exploring that convenience store on edge thinking this creature was going to jump out at the most unexpected time. I was wrong as he never did appear and all the shadow was was some type of visual glitch. Still it’s probably the most memorable moment I have of the game.

Dean’s Face Acting is back, features a lot of Blue Stinger!