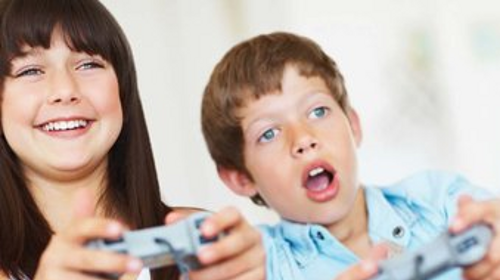 You know I was gonna put in a clip of Pauly Shore saying ‘buddy’ but couldn’t find a single clip on youtube. Internet, you have disappointed me. Well since you’ve been spared 2 seconds of Pauly Shore you can have the latest ‘What We Were Playing’ article instead! That’s right you get to read what the Sega Addicts were playing last week. And as always you can leave a comment and let us know what you’ve been dabbling in.

Michael Westgarth – News Editor:
I’ve spent more time this week introducing family members to games than I’ve spent actually playing them. That being said, my brothers and I huddled around the computer on Halloween to play Slender: The Eight Pages.

We played for about 15 minutes straight before actually running into the infamous Slenderman. We screamed like little girls, my mum came downstairs to see if were okay and the whole indecent was terribly embarrassing Needless to say I lost a night of sleep out of it. It’s a fantastic game and goes to show how far a little simplicity can go for horror games.

Stevie Grant – Features Editor:
Well I replayed Megaman 4 out of the blue (GET IT) again. As much as people like to diss that game I can’t help but think of it as the last of the great classic Megaman games. I just think it’s one of the more colourful of the them and it actually has some cool ideas. It even tries out an auto-scrolling stage! Granted it doesn’t really work but that’s besides the point. It at least tries some new things design wise and I can’t fault it for that.

Other than that?… err not much. I’ve been playing some stuff for review over at Press Pause Radio so look out for that in the future… PLLLLLLUUUUGGGGGGGGG!!!!

Scott Morrison – Site Writer:
I’ve been playing Doom 3: BFG Edition. The game contains Doom 1 and 2 as well, which I enjoy, but I bought it mainly to try Doom 3 since I never experienced it back in the original Xbox days. The game is actually a bit tense, and I’m only about 2 hours in, but I’m enjoying it so far. Doom 3 is not afraid to throw enemies behind you once you have killed all the ones in front, which makes for an uneasy atmosphere constantly, but this actually makes the game fun in my opinion. From what I understand, the original game had no flash light and I could not imagine playing without that ability, but I do see how much that would add to the atmosphere. I’m trying to fly through the game to check out all the extra stuff as well, but I keep finding myself reading every single e-mail and log I collect.

Even though the game claims to be “up-resed” in HD for current consoles, it still doesn’t look any better than the HD version of Beyond Good And Evil, and I actually find charm in that. Somehow the game feels relaxing to me even though it spooks me every five seconds with whispers of voices with no owners, enemies attacking me from behind, and the overall dark atmosphere. I’m looking forward to finishing the game and playing all the add-ons, and definitely feel like I’m getting my money’s worth so far.

Oh, and yes I am enjoying it more than Resident Evil 6. (I couldn’t help but jab it one more time, sorry

Flake – Site Writer:
Marvel vs Capcom Origins. Even if you folks have the Dreamcast version of Marvel vs Capcom, this game deserves a down load. This HD remix has re-kindled my love for what used to be my favorite fighting game of all time. It’s the definitive version of (what I think) was the peak of the Marvel / Capcom cross over games. And, as any good Sega Addicts should know, the Saturn release of Marvel Superheroes was a mess so it’s nice to have something closer to the arcade version finally.

Also dabbling with Valkryia Chronicles for the first time, courtesy of that sale we told you guys about a while back. I think that maybe my play style is more brutal than the creators intended for. The cel-shaded graphics just don’t seem to set up to depict my mad rush acrossthe battlefield in order to shoot my opponents point blank in the
head.

Kris Knigge – Podcast Co-Host:
Aside from some Dead Space 2 (which I actually think would be improved with some of RE6’s mobility options… More so than RE6 was), most of my gaming this week was on portables.

This week I tried some Monster Hunter Portable 2nd G with a friend. While my attempts to play the game on my own weren’t exactly fun, when you’re playing with someone who knows what they’re doing and can show you where to get the supplies (which are mostly in kanji I don’t recognize) that you need to build stuff things improve quite a bit.

On Vita, I played some Virtue’s Last Reward. If you have any stomach for the visual novel genre and like to do puzzles, this game is for you. Especially if you’ve previously played 999: 9 Hours, 9 Persons, 9 Doors. In fact, if you haven’t played that and own a DS, go play it, and THEN hunt down Virtue’s Last Reward. They’re both full of lies, betrayal, pseudoscience and grisly murder, and the localization is quite good for both of them. VLR’s voice work is pretty damn good too, particularly the adorably psychotic rabbit AI Zero III. All over the place in the best way.

I also played a little bit of Persona 4 Golden, got bored with the story, and went back to VLR. I need to give that game more time to impress me, but thus far, the atmosphere, characters, and tone all seem like downgrades from Persona 3. Chie’s new voice actress doesn’t make the experience any more pleasant.

And that’s this week’s What Were Been Playing! Sorry that these don’t have a set date yet but I’m still working this out. Maybe it should work out… AT THE GYM???

I’m sorry for that joke. Let me know what you’ve been playing in the comments!

Hatsune Miku: Project Mirai is complete, was in the works for quite some time