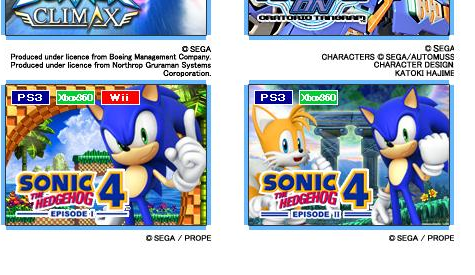 Archives.Sega.jp is a new website set up by Sega of Japan to archive all digital download releases and rereleases over the past decade or so. The website itself is pretty swish and worth a look despite being in complete Japanese. Users over at Sonic Scene have done just that and after some poking around have found that the site’s entries for both Sonic the Hedgehog 4 Episode I and Episode II state that the copyright for the games is held by Sega and Prope. Or at least it did, as at the time of writing this post, the same copyright information has been altered to display only Sega and in some places it has been removed entirely.

Prope is of course the development studio founded by Sonic creator Yuji Naka along with a group of ten Sonic Team members. While the listing may have hinted towards Prope and Yuji Naka’s involvement in both Sonic 4 games, it is likely to have been a simple mistake. But what do you think? Let us know in the comments section below!

This new Shinobi 3DS trailer shows off the challenge mode