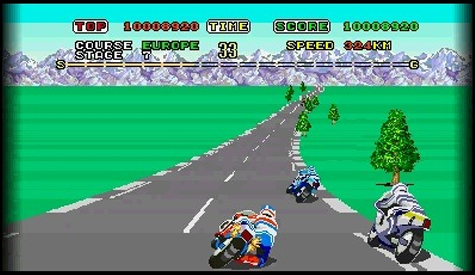 Sega has announced that a 3D version of their classic arcade game, Super Hang-On, will be released on March 27th on the 3DS eShop in Japan. For 600 yen ($6.25), players will get an enhanced version of the the motorcycle racer that includes 3D visuals, widescreen support, gyro sensor controls, replay save, mid-race saving, customizable difficulty and time limit, and the option to play either the ‘Mini Ride On Type’ or ‘Sit Down Type’ versions of the game (it sounds like the two versions of the arcade cabinet actually had slightly different settings on difficulty).

With the release of 3D Space Harrier and now this I’m getting pretty jealous of 3DS owners in Japan and some other countries. While we sit waiting for more Game Gear games to come out since the original three that launched all at once, many other territories are seeing some decent Sega releases. Plus, if the release of Space Harrier and Super Hang-On are leading up to the release of a 3D Outrun, I’m going to have to find a way to get Japanese eShop games on my 3DS. I have no other option.