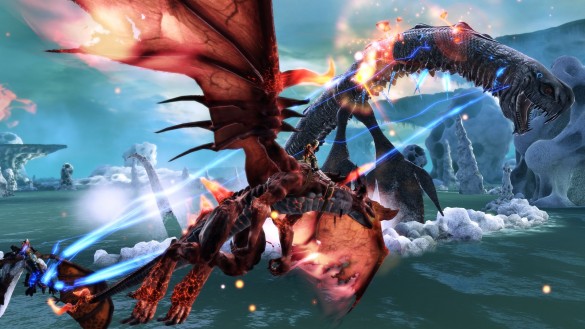 News of the Panzer Dragoon-inspired game, Crimson Dragon has been steadily trickling out before its launch this Friday for Xbox One. Recently, Siliconera interviewed director Yukio Futatsugi and learned of some added elements to the Xbox One version. Hit the jump to see some bits from the interview.

It was recently announced that the Xbox One version would switch from being a Kinect-only game, to using the controller, a relief for many. Along with this change, the game will look greatly different graphically, and also incorporate, “partner dragons,” as described by Futasugi.

Friends’ dragons are used as partner dragons in playing through the missions, providing advantage in battles. This feature was not implemented in the 360 version. Development of this feature is completely thanks to the new Live environment with Xbox One. Players can download dragons raised by other players from the cloud whenever they want, and play the game with those dragons.Players get to see dragons that other people have raised, which could be something they have never seen before. Also, experiencing the awesome powers of these dragons would motivate the player to raise his or her own dragon to that level. This naturally also leads to the player’s desire to earn bragging rights by raising dragons that would impress others.

Along with this, more RPG elements have been added to the Xbox One version than the 360 version.

To ensure that the game is fun to play for a long time, I added developmental elements. The dragon matures by gaining experience points in battles. Also, by giving the dragon various foods, it can learn different skills, and the skill you use can change the way you deal with the mission. As the dragon matures, it evolves, and changes in appearance. Dragons also have attributes, which in turn affect the dragon’s form. In the end, we have provided several secret-type dragons that are only obtainable by engaging in the developmental play.

So, it sounds like the Xbox One version will clearly be the superior of the two.

When asked for a release date for the 360 version, Futatsugi simply stated,

We do not have any news to share on an Xbox 360 version at this time.

And then I cried. But then I remembered that I can always check out the Windows Phone game that they released entitled, Crimson Dragon: Side Story.

Regardless, it’s good to hear some more news on this amazing-looking game. You can check out the rest of the interview at the source link. Anyone plan on grabbing it on Friday, or waiting for the 360 version?

Crimson Dragon: Side Story gives you a Panzer Dragoon "shmup" on your Windows Phone