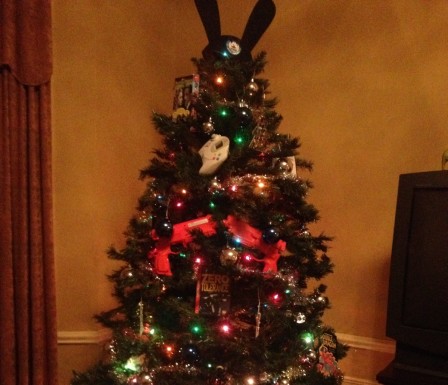 Yes, this is in my living room right now.

Some call Christmas the “most wonderful time of the year.” Most kids know it as the time of the year when they need to get their act together in hopes of getting that one toy or video game plastered all over TV, or their favorite mall. Now if I were talking about today’s kids, I would probably be referring to their favorite Call to the Medal of Battlefield 42: Kill all the Zombie Hookers Prestige Edition. But alas, I am referring to the glorious days of my youth: the 90s. Today I am content with a new pair or socks, or a gas station gift card, but as a kid all I wanted was anything and everything related to SEGA. I thought I would take this opportunity to stroll down memory lane and remember some of the best SEGA-related gifts that I acquired through out my youth. So without further ado, I bring you ScottyMo’s Top 10 Sega Gifts of Christmas Past.
10. Sonic the Hedgehog Plushie: 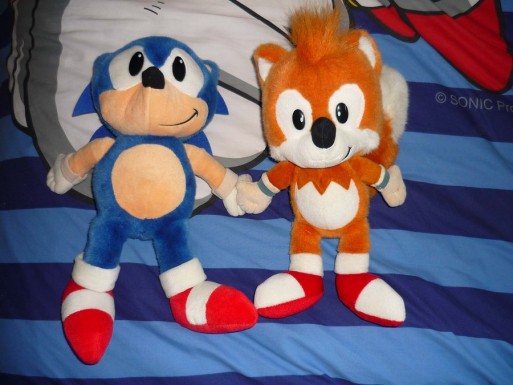 There was a time when Sonic had one friend: Tails. And the two of them were magically made into stuffed animals, which people now referred to as “plushies.” These plushies were an amazing thing to a child who thought the only way to win any really rad toys were in those ridiculous claw machines found at every single Ground Round Restaurant. I should point out that this was also a time before any Sonic action figures existed, so this was the only way to run around with your fastest friend outside of the game. And you can bet your red shoes that he went almost everywhere with a seven-year-old ScottyMo. 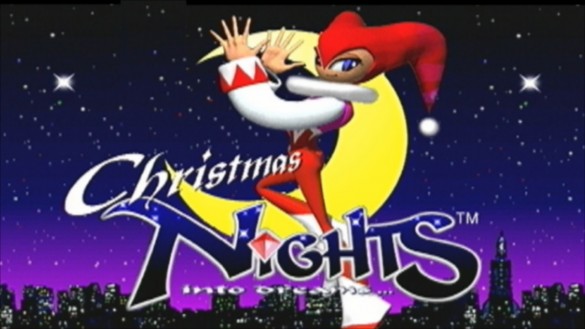 NiGHTS into Dreams is an amazing game itself, as any Sega fan will tell you. In a time before downloadable add-ons, and patches, Sega released a Christmas gift to fans in the form of a “demo disc,” entitled Christmas NiGHTS into Dreams. And what a hearty little disc it was! There were two redone levels from the original NiGHTS now covered in snow with, “Jingle Bells,” playing in the background, with recolored sprites, a new story, and a memory game that unlocked the infamous Sonic the Hedgehog into Dreams – Sonic’s first real foray into 3D. 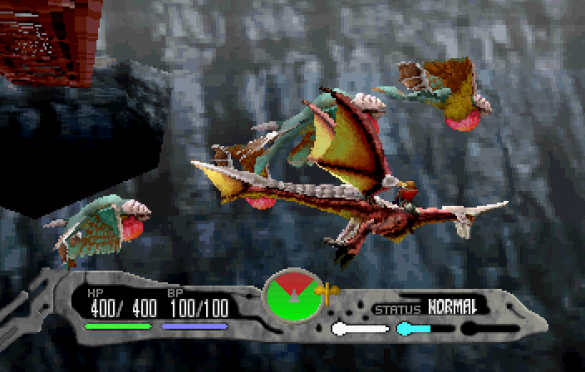 I know some people are going to get on my case for this not being the big Number 1, but let me elaborate. I loved the Panzer Dragoon series, so I simply knew this as the next game in the series. It wasn’t until years later that I sat down with the entire game through one summer and truly learned how amazing the game is. This was the only thing I asked Santa for in 1995, and to this day I remind him of how he delivered. My dad still takes pride in obtaining one of the rarest games for the Sega Saturn, because that’s really all he knows it as. And I’m ok with that. Side note: my dad still kicks butt at Virtua Cop, which we got the same year. 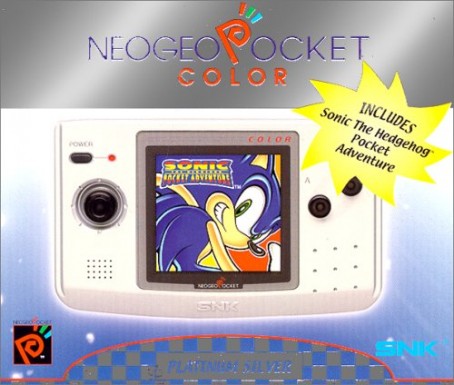 The first non-Sega manufactured system on which Sonic appeared: the Neo Geo Pocket Color. I only knew of this because of Sonic Pocket Adventure. My little brother and I both got one for Christmas. He got the bundle with SNK vs. Capcom, while I enjoyed Sonic Pocket Adventure, which was essentially a combination of level designs from Sonic the Hedgehog and Sonic the Hedgehog 2. As you progressed in the game you could also unlock puzzle peaces that eventually formed character artwork. While everyone else was playing their GameBoy Advances, I was playing my Neo Geo Pocket Color. I still have yet to try any of the crazy link-up ideas they had with the Dreamcast though.

Now we get into the real downloadable content. This really did amaze me, especially since Sonic Adventure released only 3 months prior to this add-on content. I’m not even sure how I originally found out about it unless it was through the Official Dreamcast Magazine. Yes, it was only two Christmas Trees thrown into Station Square, but it felt like a big deal back then. The coolest part about the trees was once you jumped on them they played the Boys II Men a capella version of, “Dreams Dreams” from Christmas NiGHTS. 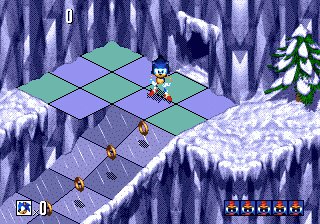 It wasn’t even the superior Sega Saturn version. I know a lot of people regard this as one of the worst Sonic games, but I honestly enjoyed it. I didn’t have a Sega Saturn when the game co-released on Sega Genesis and Sega Saturn, so I was stuck with the Genesis version. Albeit, there were no extraneous load times with the version Santa gave me. I loved playing through the Diamond Dust Zone while it was snowing outside my living room window. And since I was a foolish child, I thought this was the coolest looking Sonic game since it was in, “3D.” 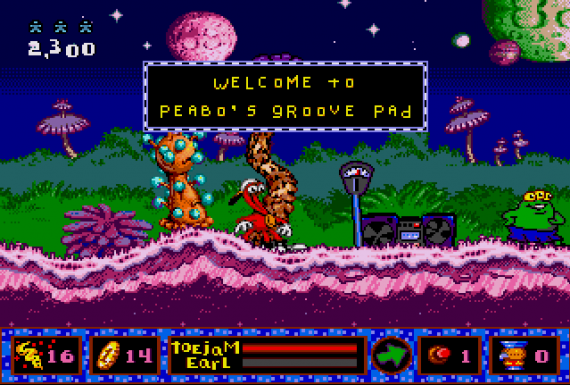 What’s funny is I remember this initially being a gift for my little brother. He received Funkotron, while I think I received Sonic Spinball. The best part about this game was that my mom absolutely loved Funkotron. So really my brother and I would take turns playing the game co-op with her. It was rare that our parents enjoyed video games, so who were we to stand in the way? (Especially since they bought them for us) Really though, some of the most co-op nonsensical fun was had with this game. I was ecstatic when Sega re-released the game, and actually played it with my mom last Christmas. 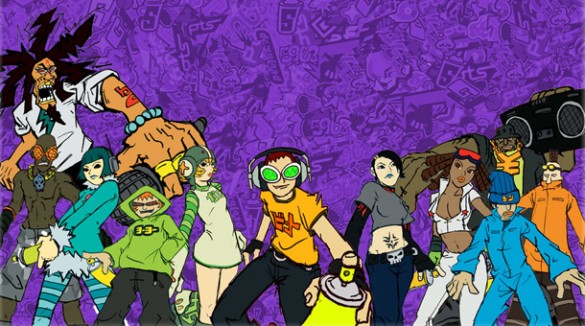 This game engulfed my Christmas break in the year 2000. Everything from the cell-shading, to the customized tags, to the amazing soundtrack kept me in the basement and away from the snowy wonderland or socializing. Who needs snowball fights, when you can have gang fights? Who needs ice skating when you’ve got rollerblading? Not me. I needed to save Japan from the man! I needed to show the streets of Shibuya that no dumb cops were gonna push me around. I also needed to paint as many phallic objects as possible on every single building. Don’t act like you didn’t do the same thing. 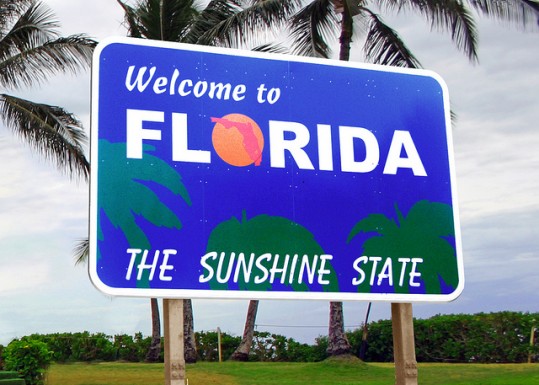 This one may seem odd, so I’ll elaborate. I have one person to thank for getting me into Sega: my childhood best friend, Tucker. In 1994, he moved to Florida, so I was left in Pennsylvania to play all those co-op Genesis games by myself or rarely with my little brother (or my mom as you read). No more unnecessarily violent Road Rash races, no more trading off in Desert Strike after destroying all the helpless civilian neighborhoods, no more blazing Sonic races, and most importantly no more Zero Tolerance co-op alien barbeques. How do you do that to a kid?

Well one Christmas, I only had one gift under the tree and it was a tiny box. I opened it to find a plane ticket to Florida. The absolute best surprise a kid could ask for was the ability to sit side-by-side with his best friend and play video games for hours on end. There’s still a photo somewhere of my reaction, which was an embarrassing dance in my PJ’s.

While visiting Tucker, we played enough Sega Saturn and Sega Genesis to make up for the lost year apart from each other. Not having a Saturn yet myself, I sat down with my Sega Nomad and Sonic 3D Blast while Tucker played his version on the Saturn (another reason the game has a special Christmas memory). We ran through countless races of Daytona USA, hundreds of battles in Virtua Fighter/Kids, and found plenty of time to light everything on fire in Mass Destruction. Those were such simpler times. And I have to say I definitely miss the sunny Christmas rather than the snowy ones in Pennsylvania.

I know, I know. At first you’re thinking, “What could possibly top a childhood memory like the one above?” Well, the console that started it all of course! The one and only: Sega Genesis. It probably goes without saying that my first game was Sonic the Hedgehog. With the Genesis, I also received World of Illusions and Quackshot. I think my mom bought Columns for herself, because it reminded her of the first video game she enjoyed: Tetris. I thought Sonic was the coolest dude on the planet, and everyone needed to know it. Regardless, I didn’t leave the living room all Christmas day. Come to think of it, there was rarely a Christmas after this one when I left the living room.

And there you have it! Those are all of the best Sega-related things that Santa gave me over the years. Granted most of the selections were games, they formed some wonderful memories and traditions, and nearly all of them still sit happily on a shelf, or in a shoebox tucked away for future generations. To this day, Sega will always be a part of my Christmas, and generally most other holidays. So, how about you, dear reader? How has Sega been involved in your holiday season? Feel free to tell us a story or two in the comments below or on the forums! And Happy Holidays!

It is the best time to start reading Sonic comics

Excuse me sir, there is a Sonic in your Twitter logo