We all have those little opinions we dare not voice. What if you thought Neighbours was ‘like Shakespeare, only sunnier’? Or that Bubsy 3D was ‘stunning … original…’ and a ‘sleeper hit’? We are all entitled to our opinions, right? Wrong. We are entitled to the opinions we can defend and here, in this new (ir)regular column you will find the Sega Addicts sit down in Contrarians’ Corner, defending the indefensible and unpopular alike. Hit the jump to discover if…

Virtua Striker is better than Opium and Chuck Norris.

When XBox One launched in Europe, its bundling with FIFA 14 emphasized the importance of football games to home consoles. Even the PC, with its work focus and associated back ache, manages to shoe-horn football into spreadsheets with the Sega published, Sports Interactive developed, Football Manager games. Yet the sport’s popularity in the home stands inversely proportional to its arcade presence. Beyond SNK’s Super Sidekicks series, few have deemed football worthy of capture in the arcade space, less so since sprites turned to polygons. Few that is, other than Sega, whose Virtua Striker series has been a stalwart of arcades since 1994. With such an enduring presence and a bizarre lack of competing titles, an impressive video game should be presumed. Yet, a quick trip to MetaCritic says one thing and one thing only about Virtua Striker: it’s a bad game.

Frankly, dear reader, the problem here lies not with Sega’s AM teams, but rather squarely at the hands that hold the joystick. You erroneously thought of Virtua Striker as a football game, an easy mistake to make given the green pitch, goalposts and the need for digital feet to connect with a virtual ball. However, football itself does not translate well to video games. A cursory glance at Jonathan Wilson’s excellent publication, Inverting the Pyramid, which tells the story of football’s tactics, reveals the myriad of ways in which one set of rules can be played, a veritable multitude that defies easy simulation in a video game. The raison d’être of Football Manager is to simulate tactics, giving the player a free hand to construct their team’s play style, yet the plethora of ‘cheat’ tactics, tactics developed legally in the game that the match engine cannot cope with, exemplify the difficulty of Sports Interactive’s task. 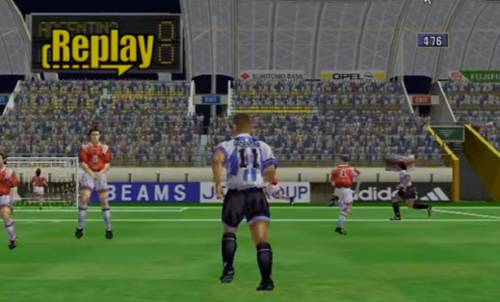 Spot the ball on this goal worth 476 points. Can you do better?

Sega’s AM2 and Amusement Vision thus had a decision to make. They could choose to create an incomplete simulation of as many styles of play as possible, or, as is the path most used in the home space, to make a game based on how the development team believe football should be played. This is why, given football’s current Spanish/Barcelona dominance, we see up-to-date games like FIFA 14 placing an emphasis on possession, tempo and short passing. The Gospel according to Saint Pep, if you will. Naturally, in the simpler, more agricultural time of the mid-90s, where a direct 4-4-2 with ‘tricky wingers’ was as natural as day and night, the same process took place. This resulted in an omnipotent long-ball in the FIFA games of the era, rendering any other play-style obsolete. This developer-led straitjacket sits at odds with football’s free-form essence, an essence which, as the world’s most popular sport, was widely understood by all who held a joystick. For years the football games that sell the most have felt empty, merely a reflexion in a muddied puddle of football’s true nature.

There was, however, a third option, to make a good arcade game, football’s baggage be damned.  This is the choice that was less made, more committed to with wedding rings, white dresses and a punch-up at the reception. In early iterations this ‘arcade interpretation’ even excluded some of the laws of the game, with offsides and cards deemed superfluous to the experience. This left Virtua Striker no more a football game than a Harryhausen skeleton was a person. Sure, it looks about right and with a bit of squinting it even moves right, yet the bones are merely the building blocks and clearly different from Todd Armstrong in his muscled cuirass and chiseled facial hair. Virtua Striker takes the bones of football and drapes over them not a flawed attempt at a simulation, but a benzedrine driven experience in the finest traditions of the arcade. An experience that seeks not to replicate the nuance and depth of the real sport, but rather to condense all the drama of 90 minutes into a slice of play worth ¥100. The excitement of football, the long incredulous shots, the wild haircuts, the frenzied challenges and the defence splitting passes are all present and crammed in with scant regard for real football. It is the soap opera when compared to real life; it is not football, it is Football Plus. 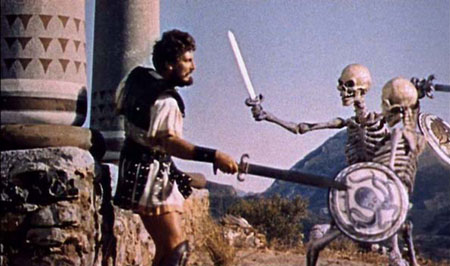 Just as two drunks swinging at each other in a pub car-park lacks the finesse, and fireballs, of Street Fighter, so too does Virtua Striker eschew reality in search of a game worthy of the arcades. Many of the criticisms of Virtua Striker make little sense given its arcade home. Reviews mention how Virtua Striker’s virtual players must go through several frames of animation before they can pass or shoot, making free-flowing football hard to achieve. However, this not only guarantees the drama of rapid turnovers and the generation of chances, but as a criticism it is akin to complaining that the hard-punch button in Street Fighter cannot simply be mashed to victory. Just as one must judge when to use an animation-heavy punch that leaves you open in fighting games, one must also determine when it is safe to pass to a player or pass into space. Failing to do this cedes possession as swiftly as a submissive cuckold surrenders his partner.

There is a mechanical depth to Virtua Striker, common in the DNA of all great arcade games. The simple act of maintaining possession, knowing when to play a ball into space, learning to curl even the most prosaic of passes, crossing with both high and low balls: all these feature reward repeat play as surely as a successful ultra-combo in any fighting game. Yet, with the Gamecube’s Virtua Striker 3, narrative depth was added with the ‘Road to the International Cup’ mode. Just as fighting games have changed to provide greater incentives for repeat play in the home space, think of Soul Calibur’s ‘Mission Mode’ or Street Fighter Alpha 3’s superb ‘World Tour’, so too Virtua Striker 3 engages in a level beyond its gameplay mechanics. Whilst not  Shenmue in soccer shorts, the team- and character-building reward the player and justify the transition from arcade to home, while unlockables round out the package for all physical releases.

The most recent version of Virtua Striker is 8 years old and exclusive to the arcades. Sad face.

Despite all this wonderful vertical depth, MetaCritic shows the GameCube version received a frosty 58%. Surely, the conundrum posed at the start of this article, why is Virtua Striker without competition, has a simple answer: no-one likes it. Why bother to compete in a sector devoid of critical acclaim or customer satisfaction? Yet, the longevity and presence of the series in both European and Japanese arcades tells a markedly different story. Virtua Striker stands alone, not because of flawed execution or a conceptual poverty, but, like Street Fighter 3, because it is simply peerless, regardless of popular recognition. Its laser focus rewards the player with layers of depth and a completeness of experience that is hard to better. Get a friend, dive in, and dare tell me I’m wrong.

Get your guild on in Spiral Knight's new expansion

Ask your Sonic Generations music questions at the Sega Blog