Damn it, Atlas, you’ve dropped the ball again! No, not Atlus, Atlas- you know, the Titan from Greek mythology who was condemned to hold the sky up for eternity? That guy. Wait- do you not know who he is? Pull up a seat then, friend, and let’s discuss some art and cultural history while destroying everything in our paths as we flee from God himself- you know, just to to keep things interesting. “That sounds… a bit excessive,” you might say, and you’re right- unless you’re talking about playing Rock of Ages 2: Bigger and Boulder, the sequel to the 2011 unexpected hit Rock of Ages that nobody saw coming. 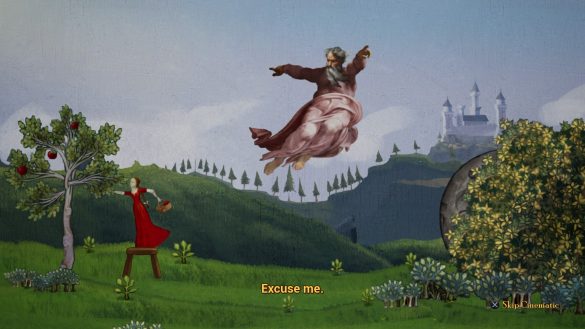 Let me just start by saying that if you enjoyed the general tone and vibe of the original Rock of Ages, you’ll be pleased to find that Rock of Ages 2: Bigger and Boulder is more of the same, down to the goofy little screams the bosses you fight let out when you break down their castle walls. The Monty Python-esque humor and art style enjoyably portrays the over-the-top and utterly ridiculous un-historical figures in a way that is often amusing, when it’s not outright prompting you to say, “What the…?” The outlandish portrayal of the characters means that even if you’re not a history nerd, you’d still probably get a kick out of watching your opponent’s antics shown in their brief introduction before each battle.

“What about these so-called un-historical figures,” you may ask? Even if they may be fun characters, aren’t they just the same ones as last time, or the war heroes you’d expect from a battle game?” Not at all! ACE Team managed to dig up even more relics of the past to squish with a giant rock with a goofy face carved on it. Some of the opponents you face off against in the campaign mode feel a bit out of place, such as the Baba Yaga. However, a vast majority of them felt like natural choices, such as William Wallace, “the 7-foot-tall Scotsman who consumes the British with flames from his eyes and bolts of lightning from his arse”; and Vincent Van Gogh as a unsettling paint-spitting spider creature that can detach his ears for the purpose of hunting you better. 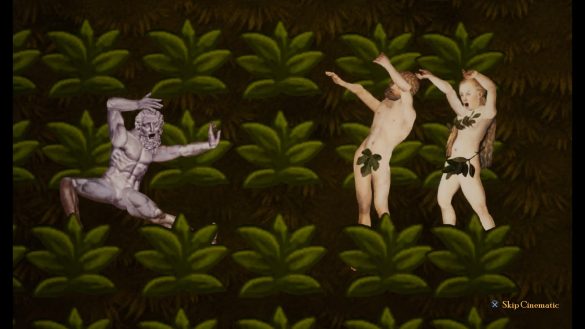 “Ok, Elle,” you might say, “I get it. The characters sound fun, but what the hell does the game play like?” Let’s try Super Monkey Ball but with tower defense and racing elements.

I’ll wait for that to sink in.

Got that in your mind? Great! Let’s break that down, then. The movement portions of the game control like Super Monkey Ball; you choose your boulder from the multitude of unlockable ones, each with different stats and effects, and roll it like a bat out of hell. Sounds easy, sure, until you consider the obstacle course laid out for you by your opponent, who’s planted all manner of walls, weapons, and traps in your path for the sole purpose of stopping you from reaching their castle. The battle goes both ways, though, as your opponent will also try to fight their way through the obstacles you place for them, thus the tower defense. With both of you rolling your boulders for each other’s castles, you’re locked in a desperate race to break down their castle before they can break down yours, because the loser gets flattened. 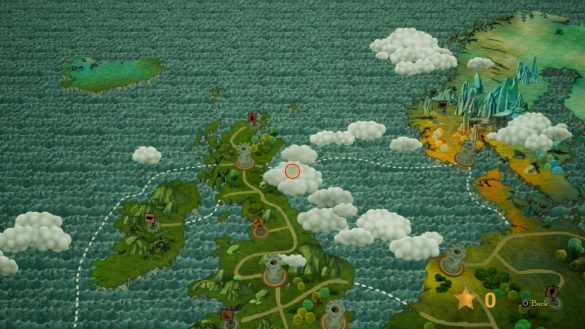 We can’t talk about the gameplay without touching on the bosses a bit, though, and with easily identifiable works of art and legends such as The Thinker, the Sphinx, and the Loch Ness Monster to defeat, there are plenty of surprises in store. Each boss fight promises a break from the standard gameplay, and there seems to be just the right amount of battles between bosses to keep it from getting too monotonous. Some boss fights are pretty straightforward, like the Loch Ness Monster’s boss fight, which plays like kind of like a 3D game of Frogger and has you jumping between ships, whales, and rocks to reach the boss to strike it. Others? Not so much, at least not to me. I definitely had some issues at first figuring out what exactly I was supposed to do during some of the fights, but once I did, I admittedly chastised myself a bit for missing something that was so obvious.  This was, of course, in addition to some of the odd bugs or glitches I came across in my time with the game, but there were surprisingly few, and none of them were too bad or in any way game-breaking, so I often found myself laughing about it for a few minutes before moving on instead of being annoyed. 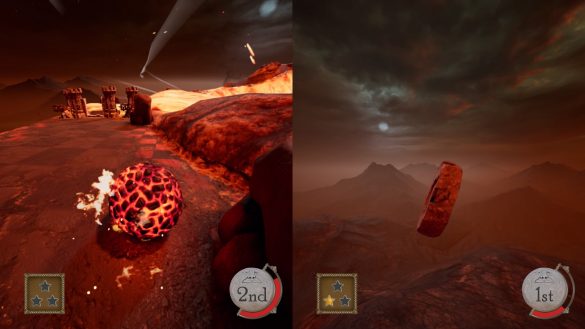 A big key to winning most battles, in any case, is to perfect a combination of obstacles that makes your opponent’s life as miserable as possible as they try to make their way to you. That probably sounds pretty great to the more sadistic or strategy-minded individuals out there, but I bet it would sound even better if I told you that Rock of Ages 2 introduces an up-to-4-player multiplayer mode, both local and online, so now you can make your friends miserable, too! Go head to head with your friends (or your enemies) in two different game modes: Obstacle Course, which pits you all in a race against each other through an AI-generated obstacle course, or Game of War, in which two teams of two players (or AIs) each defend their castles while trying to bowl over their opponents. In both game modes, you’ll definitely fare a lot better if you’ve unlocked all the boulders and traps in single-player mode beforehand, not to mention you’ll have more fun coming up with new torturous combinations to subject your opponents to. 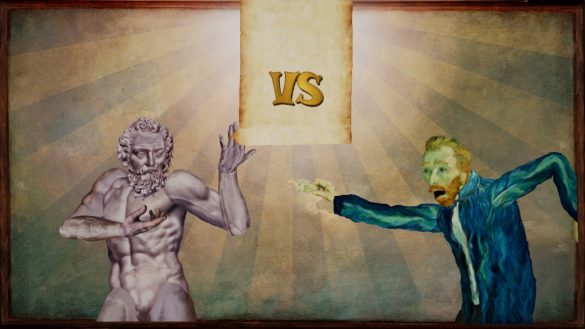 I’m honestly not sure when or how a sequel to Rock of Ages got approved and made, but I’m really happy that it did. It gave me more of that fun ball-rolling madness that I loved about the first game, but it also added just enough to make it worth your while- especially at a $15 price point and even more so if you can find some friends to play with. The campaign is definitely longer and- in my opinion- more challenging than the first one, and the addition of the chaotic but enjoyable multiplayer modes offers replay value that a single-player game couldn’t hope to achieve. If you enjoy the tower defense genre or games like Marble Madness at all, or if you just want some goofy fun with a ridiculous concept, be sure to pick this up on either PC, Playstation 4, or Xbox One- you won’t regret it. 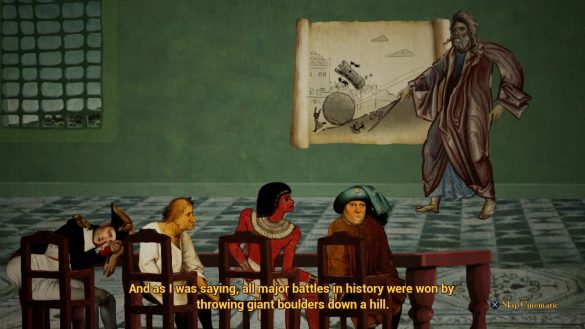 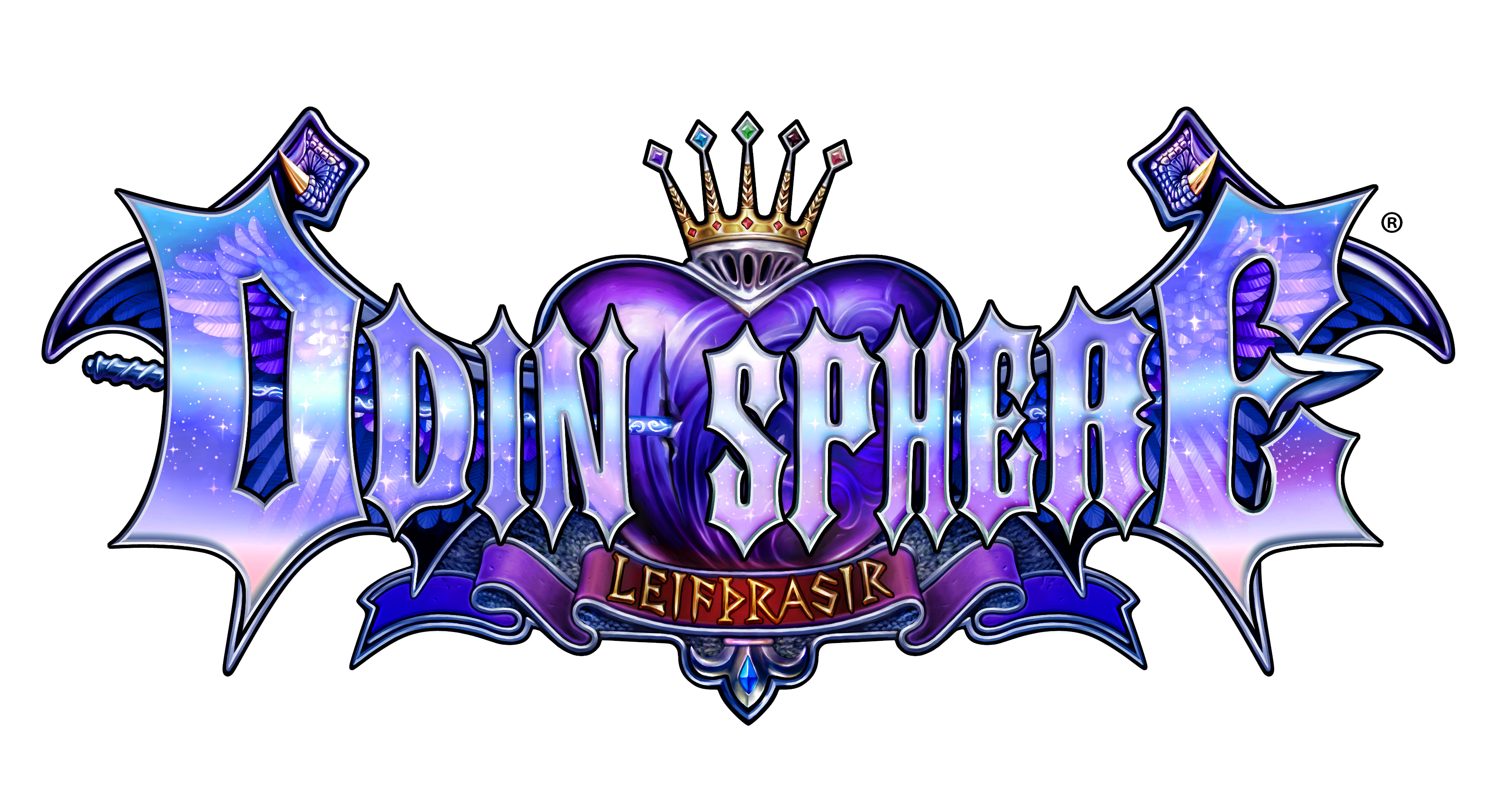