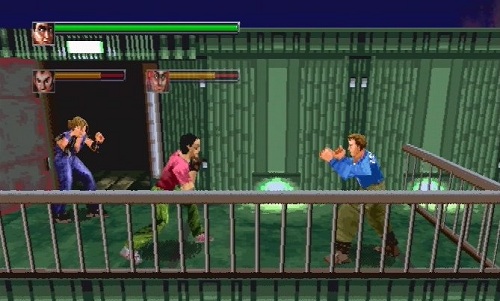 Originally titled Dynamite Deka, for the Japanese release, the US/EU version of this Saturn title was tweaked when the game was pretty much completed for the American release to capitalise on the resemblance towards the action movie. Namely, the main character bears a striking resemblance to John McLane and it takes place around a hostage crisis in a large tower building, but with no villainous Alan Rickman or, well, any actual relation at all with the movie bar that, how does it stand as on one of the very few beat’em ups on the Sega Saturn?

Released in 1997, the arcade port is almost entirely a straight conversion. I say almost, because the main menu does allow you to play an old submarine arcade game called Deep Scan to earn extra credits for the main game. Other than that it’s a faithful recreation, which is actually a bit of a disappointment. The game itself is a 3D Beat’em up, perhaps even the first of its kind, where the fighting feels a little more like the original Virtua Fighter games, albeit with only two playable characters. Standard for a beat ’em up, but it’s the weapons here who’re actually the star of the show, as you’ll find any number of items you could use to crush your foes, be it a fire extinguisher, a 9mm handgun or a heavy artillery cannon. Of course, you can also beat enemies up to steal their weapons, so regardless of what you end up nabbing, getting to finish an enemy off with his own weapon is as always immensely satisfying. Even more so if he was carrying a rocket launcher at the time.

So the fighting is solid, and the weapons manage to keep things fresh throughout, but unfortunately that’s kind of where the game starts to lose its charm. The style of the game is pretty wonderful, it’s that typical 3D Saturn style of largely blocky but incredibly fluid characters, but the areas you fight through are woefully simplistic. Every stage of the game is really just a single room, where you beat everyone inside and then proceed through a swift QTE which determines somewhat how the next room will play out. That however is pretty much the entire progression of the game. You never get that wonderful sense of scale you do in Streets of Rage, where you start on street level battlings thugs, before wrecking a bar and its patrons and then finally ending up outside the back of the bar where you beat down the battle-ready bartender you saw earlier cleaning glasses before casually leaving to prepare for your inevitable encounter. 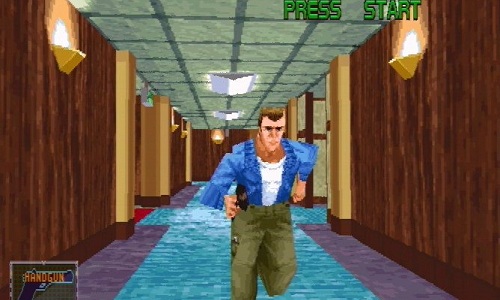 It’s such a shame really, because without that flow and transition between stages the whole experience feels incredibly truncated. The dull and unneeded cut scenes instead are introduced to break up the action, setting up the final encounter but never really serving any other purpose. Combined with the rather short length, even for a beat ’em up, it doesn’t really come together as an overall console package. As an arcade title it was pretty great, but I couldn’t ever really consider it a must-own console title, especially at the price of a full retail Saturn game, and probably not worth the effort to try to find it nowadays either.

The reason I say that so casually, is that there was actually a PS2 port as part of Japan’s Sega Ages line up. Not only does it include the original Saturn style game, but also a version with entirely redone graphics and a great array of bonus modes that really switch up the experience, adding to the replay value missing from the original release. Easy Mode has you play as two stronger characters in the form of Ax Battler and Tyris Flare from Golden Axe, there’s an Altered Beast Mode which lets you play as two monsters fighting without any extra credits, instead scavenging life ups from all the enemies they beat down and a Deadline Mode where you have unlimited life but have to race to the end of the game under a strict time limit. The fact that these modes don’t simply slightly alter the gameplay like Zombie Revenge, but instead feature entirely different character models and cute Sega references pretty much makes the original Saturn release obsolete.

I don’t mean to completely berate the game, as I did have a lot of really fond memories of it as a kid, but looking back now I have a much higher appreciation for what Streets of Rage managed to accomplish as a home console beat’em up, especially on the technically inferior Mega Drive. Die Hard Arcade was a flashy, fast and exciting entry into the genre, but it doesn’t offer a whole lot of interest past your initial play through, and on a system that already by this point received the transcendent Guardian Heroes, that just isn’t enough. Definitely knock the score up to a B+ if you’re playing the Sega Ages version, but otherwise;

One for die hard beat’em up fans only. C+

The Sega Addicts Top 10 Hidden Gems for the Saturn