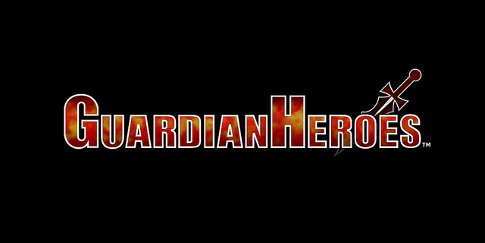 Guardian Heroes is remembered as one of the best games on the Sega Saturn. This 2D action RPG/beat-em-up hybrid was unlike anything else available at the time, and still features elements that are rarely seen in beat-em-ups today. That said, the game is 15 years old and the beat-em-up market is very different now than it was then. 3D beat-em-ups are the dominant form, and RPG elements seem to be in just about everything these days. A lot has been done to update this game, but was it enough? Was it even necessary? Hit the jump to find out all you need to know about Guardian Heroes for XBLA.

As I mentioned, a lot has been done to update this game from the 1996 version. The graphics have been improved significantly and how have a hand-drawn look that is very oddly reminiscent of Comix Zone. I’m not sure if that was intentional, but overall I think the game looks great and the comic book style graphics somehow work with the medieval setting. The controls have also been updated. Now you have the ability to use a light, medium or heavy attack (before it was just light and heavy) and also a backstep technique which can be very helpful in the midst of combat. Despite these changes the game gives you the option of playing the game with the original graphics and controls. It also allows you to choose one or the other, so you can play the game with retro graphics and new controls, or new graphics and retro controls. The game also now has online multiplayer modes including Co-op and Versus modes, as well as leader boards. 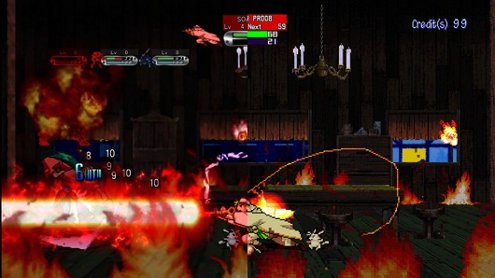 This image is a good comparison of grapics styles.

In Story Mode the game features four characters to play as off the bat, and more can be unlocked later. Each one has their own strengths and weaknesses that affect how you would play the game. It’s not hard to find one you like depending on how you like to play the game. Your character choice doesn’t affect the story, but it’s about the only thing that doesn’t. After most stages you’re presented with a dialogue choice which directly affects which stage you play next and which path you take to a certain ending. Which ending you get is also affected by your karma score. You lose karma for attacking dead opponents, destroying background objects and killing villagers; a low karma score means a bad ending. This multitude of ways to play the game’s story keeps the game feeling fresh for a lot longer than any other beat-em-up I’ve played and gives it great replay value.

On the other hand, sometimes the stages don’t fit together as clearly as you would like. This can make the story kind of confusing at times. This isn’t really a game breaker, and the more you play the more you’ll understand, but sometimes it seems to make no sense and it can be alienating. At other points in the game the dialogue seems to go on for an inordinate amount of time. There is a way to “skip” cutscenes, but it doesn’t actually skip them—it just fast-forwards them. It’s frustrating because slamming the A-button several times in rapid succession would have done that. I just want it to instantly end. Again, these things are barely complaints and do very little to ruin the game. 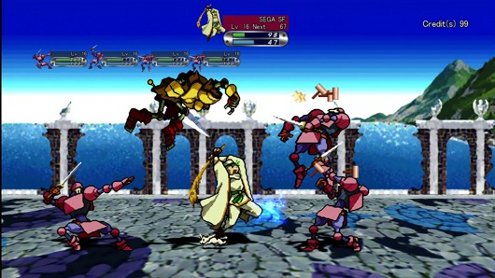 With respect to gameplay this game gets most stuff right and it has a very pleasurable difficulty curve that is neither too easy nor too hard. Characters control very well and the controls (in both control modes) are easy to learn. If something feels strange you can always switch around the controls to suit your personal preference. Some parts of combat aren’t as polished as I would like them to be though. It can be difficult to turn around if you’re mashing an attack button; you have to stop your attack turn then attack more, and it’s not often enemies give you enough time to do that. It’s also not infrequent for this scenario to lead to you getting juggled around by enemies, waiting to hit the ground so you can either get dizzy and get hit more or pull through and school those suckers. The dizziness thing really has no business in this game either. In all fairness this happens more later in the game than earlier, at which point it feels less cheap since you’re expecting those levels to be hard anyway.

The RPG elements in the game are pretty interesting, though they don’t seem to have a huge impact on the gameplay. That said, they seem to be a lot more complex than a traditional RPG’s stats are. You would have to look this up to find that out though because the game just presents you with a list of stats and gives you points to increase them with. It doesn’t even give you the full name actually; you only get the abbreviation. As I said though, they really don’t seem to have a huge impact anyway so I usually just end up stacking the stats that are already high. 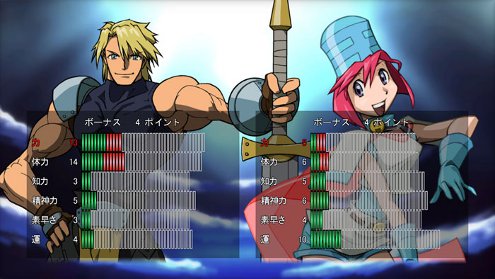 This is a Japanese shot, but you get the idea.

Another thing I have an issue with is how you choose commands or magic. For both you press a button and a thought bubble appears which allows you to choose which command or spell to use. However this is all done in real time and you can’t move while this happens, so unless you’re going to use the first option that comes up, you will get hit before you get a chance to do anything. It’s also incredibly difficult to discern what the picture you’re selecting will actually do. I honestly have no idea what any of the commands do or why they would be useful other than the two that seem to make the AI player attack stuff. This is probably the biggest complaint I have because commands and magic are huge parts of the game. Some characters rely on magic to be useful and you’re always playing with the AI player, so it’s disappointing to have such a bad system for them.

The game also features an Arcade Mode which takes all of about 5 minutes to get the full experience of. Basically, you pick a character and then you’re plopped in an arena to fight several other characters at a time. There seems to be no point to it, and for some reason there are no achievements for the mode. That said, it’s a fun way to waste a few minutes if that’s your thing, and the list of characters you get to choose from is incredible. Basically any sprite in the game’s code can be used in this mode.

Guardian Heroes on XBLA has a lot going for it, but it is far from perfect. At times it’s age shows, but for the most part it’s an incredibly enjoyable game to play and it’s legacy seems well earned. B+